The realization that aging applies to everyone, most particularly yourself, comes in manageable morsels, some bitter and detectable only to you (seeing your first passport photo of your fifth decade) and some more mild in flavour and better perceived by others (your evangelical interest in backyard birds).

We are fortunate to back onto a conservation area that extends into hundreds of acres of forest. The birds treat our feeders like campers at the camp store on the way in or out of the backcountry – not what you’re there for but very much appreciated nonetheless.

A few years ago, some bluebird houses arrived via Greyhound bus from Alberta, made by my brother-in-law. We erected two of them at the edge of our property, facing northeast toward the back of our house. Bluebirds (not blue jays) are cavity nesters. Their numbers have dwindled over the past century as farmers began using metal poles rather than tree stumps for fencing and burgeoning populations of starlings and wrens competed for the remaining cavities. Bluebird boxes have helped restore the population. Nonetheless, for quite a few years, there was no action in our houses.

The mystery ‘beep’ didn’t bother me. Until one day, it did

Then it happened. It was right around the time that we were all clutching our pearls, having learned that the school break would be extended for TWO WEEKS! Two extra weeks to bend this virus to our will, wrestle it into submission, like we do with everything else in the natural world.

It was during that week that we first spotted them. They would show up in the morning for a few hours, alternatingly dipping in and out of both boxes. The male, vibrantly blue, would sit atop of a box, broadcasting to any competitors that he had claimed it. (If he had a coat, he would have placed it on the second box.) The female was a duller blue – no need to waste energy with extravagant displays when the boys will fight over you regardless. Sometimes it was clear they were bringing nesting material into the box, but much of the time, it was just mysterious fussing. My first action of the morning was to come downstairs to the back window and check in on our tenants. This quickly became an important part of my day. I read everything I could on the topic and learned that our box orientation was their second favourite. (The camp store always has cereal, just not necessarily your preferred brand.)

By the middle of April, the pattern changed: the male was busy making purposeful trips back and forth to the box but the female was rarely seen. She was now brooding.

One of the many thrilling things about being a bluebird landlord is that you are encouraged to “monitor” the box – open it up periodically and check on things. Growing up knowing that approaching a robin’s nest made you a really bad person, this obligation to meddle was heady stuff. I wasn’t exactly sure what I was supposed to be monitoring for. Experts spoke of predators and fungus but I didn’t know what I had to offer on that front, other than stern disapproval. Nonetheless, being as keen on state-sanctioned interloping as the next guy, toward the end of April, watching carefully to ensure both parents were out of the box, I opened the latched side door, peeked inside and saw five tiny, perfect white eggs.

The hatching was announced 14 days later when the mother joined her mate in foraging trips outside the box. By this point, I was now spending long hours splayed out on my belly on my back patio, supporting my long lens, like a Hollywood paparazzo who got a tip about the Kardashians. I was privy to an amazing display of co-operation between the parents as they worked to keep their nestlings, and themselves, fed. On two occasions, I used their outings as opportunities to visit the four little bluebirds. They appeared as though crafted by a cartoonist with little talent and even less restraint – gaping gullet, patchy tufts of fuzz, translucent skin. They were the picture of vulnerability and though no one would call them cute, they managed to trigger every protective instinct in their landlord.

Bluebird nestlings fledge around days 17 to 21, and landlords must cease monitoring after day 10 to avoid an accidental tumble out the side door. I continued my daily “Nestflix” watching from the back window. Unusually, on day 13, I did not spot the parents before I left for work. A gnawing anxiety followed me throughout the day and as soon as I got home that evening, I looked for them, again in vain. The breaking up of the polar vortex had resulted in the coldest air on the planet settling over our little bluebird boxes for the two nights after Mother’s Day. Surely, they were fine though. They were wild animals, right?

After three days of inactivity, I visited the box, tentatively opening the side door. At first, I thought the nest was empty but when I got up on my tiptoes, I could see the four little bodies at the bottom of the nest.

The grief was unexpected. Was it anthropomorphizing to wonder what the parents felt when they saw their young, normally clamouring and lurching, lying still? Seeing the empty branches of their favourite tall maple left me with an ache and the feeling we had let them down. When we told ourselves that they were wild animals, we were right, but we drew the wrong conclusion. Nature is indiscriminate, which sometimes, to our human sensibilities, plays as cruel. We buried the nestlings in their nest, at the foot of the boxes.

So much has been lost this past year. Lives and livelihoods. Hope. Trust. Willingness to persist. Almost a year to the date that we first tried to believe that we could bend nature to our will, the bluebirds came back to our boxes. I’m not saying I could pick them out of a lineup, but I choose to believe it’s the same pair. Holding no bitterness about how things went down, they reprised their collaborative nest-building, claiming both boxes but ultimately preferring the same one as last year. Winter gave way to a most reluctant spring, one that proved to be just kind enough. Today I visited the box for the last time. Fat and feathered, the four baby bluebirds are now too big for me to risk opening the side door. One day soon, I will watch from a distance as they flop from the safety of those four walls to confront the world outside. 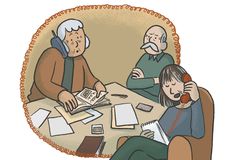