It was a glorious life – richly lived, widely celebrated and tragically cut short. My cheeks burned with tears as I stacked the quartered limbs of our dearest friend against the side of the house. Our majestic maple tree was gone. Hacked to pieces in the early morning mist by woodland assassins disguised as city-employed arborists.

Ours was a grand tree, a most magnificent tree. Close to a century old, it featured prominently on our corner lot, guarding the entrance to our neighbourhood enclave. Its limb structure was amazing. A short and stocky pedestal trunk supported thick branches that grew straight out and then shot more than 60 feet in the air – like two hands, palms together with fingers pointing heavenward. People frequently stopped to admire our tree, taking pictures or collecting leaves. Some confessed to regularly talking to our tree, such was its mystical aura. As if encouraged by the attention, our maple was the first to bud in the spring and trumpeted autumn’s colour change with a sea of blazing red leaves.

The beginning of the end came in the aftermath of a violent spring storm. High winds cracked a large branch, leaving it dangling precariously some 30 feet above the ground. Dutifully reported, the city provided an assessment date for what I considered to be the human equivalent of a broken toenail. Mostafa, our landscaper, was refreshing the garden that day, so I jokingly asked him to make sure the city didn’t cut down the whole tree by mistake.

At 10 a.m., Mos texted: “City has condemned the tree.” I shot back the rolling-on-the-floor-laughing emoji. “No joke. Call me,” he replied. I soon learned that city experts concluded our tree had exceeded its useful life and must come down. Stunned, I sputtered, “Have they lost their minds? Our tree isn’t a tub of yogurt with a best before date for goodness sake. This is Elderon, Mightiest of the Maples.” Mos hung up. I spent the rest of the day seething.

A city notice stuffed in my mailbox set the execution date for the next spring and included an offer to plant a free replacement sapling. Sapling! I was thunderstruck. It was the equivalent of a cleaning-service sticky note saying, “Sincere apologies. While dusting, we broke your Ming Dynasty urn. Please accept this coupon for a free dollar-store replacement.”

All thoughts turned to saving Elderon. I would demand a city hearing and call an expert witness, such as our landscaper extraordinaire. He would testify our tree was healthy and in the prime of its life. Unfortunately, Mos took the unfathomable position that all things in nature eventually die, which was completely beside the point.

Ever helpful, my wife suggested chaining the kids to Elderon when the tree muggers came to do their dirty work. We discounted this strategy partly for risk that our parenting skills be misjudged, but mostly because the kids, being in their late 20s, were unlikely to co-operate.

No, saving our magnificent tree would require more thought. But we didn’t panic. We had six months to secure a stay of execution. Or so the city would have us believe. Summer gave way to autumn and, like clockwork, Elderon heralded the shorter days and cooler nights by infusing shades of crimson into its massive green canopy. Then, without warning, the city struck.

Working from home that day, my spouse happened to look out the sunroom window. She froze in horror at the sight of city workers clambering over our faithful forest friend. Armed to the teeth with all manner of bucksaw and pruning shears, they looked like pirates boarding a hapless sailing ship.

Eyes ablaze with outrage, Cheryl flew out the front door and charged the motley crew. Clearly outgunned, the thugs with the chainsaws backed off. “Lady,” the crew boss said, “we’re just contractors. Your beef is with the city.” Recognizing the hopelessness of the situation, Cheryl learned this gang was an advance party that had come to trim away all small branches and leaves – a kind of preop buzz cut.

Defeated, we turned our attention from life-saving to life-celebrating. With Christmas just around the corner, we quickly landed on having our stately maple professionally lit from trunk to treetop. Concerns of extravagance were swept aside by an overwhelming need to acknowledge our friend’s century of faithful service to the neighbourhood.

On the day of decoration, I received a text from Josh that his crew were on-site, and that lighting had begun. What I didn’t expect was another text moments later informing me that the city had arrived to chop down the tree. Once I regained consciousness and convinced myself I wasn’t living in the twilight zone, I called Josh for details on this catastrophic turn of events. For once, good news. City contractors agreed to wait until January when the lights were to be removed. A temporary reprieve for Elderon!

That night we invited a few neighbours over for the official lighting ceremony. Wine and cheese passed the time until darkness descended. Parading outside, we raised glasses as I activated our beacon of festive joy. A radiant glow from the multitude of green lights burst forth and shone down upon the small gathering. A smattering of polite applause was quickly overruled by stunned disbelief as we cast our eyes upon the world’s tallest Christmas cactus. The manner in which the lights were coiled around the remaining limbs turned our beloved tree into a cactus. Children formed a ring around the tree and began singing, “Oh cactus tree, oh cactus tree …” Snickering begat fits of laughter as everyone joined in the merry-making. Tears streamed down our faces as we realized that Elderon was, indeed, going to be the centre of attention for one last season. Evenings throughout December and January saw passersby stop and admire our mighty maple cactus. Cars pulled over as phones snapped pictures. The joy derived from our spectacular display was recounted in e-mail accolades from neighbours and knocks on the door from perfect strangers.

Time marched on. The city came and chopped our mighty maple down. Chainsaw wood chips left behind formed a nutrient base for the replacement sapling planted a few feet away. A slight depression appeared in the newly sodded ground where Elderon once stood.

I’ve come to realize that Elderon is a symbol for how I hope I’m living my life. Stand tall, keep your feet firmly on the ground, celebrate change, and be an unending source of joy and positivity for those around you. Make people smile even at your own expense. Go out with a bit of drama and hope those left behind celebrate your passing. Leave a gap, but not a hole by nurturing and then making way for the next generation. Our future is their past. 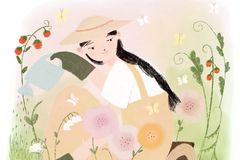 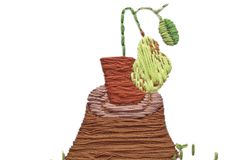 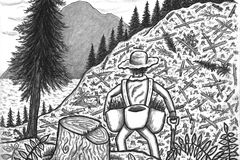