Nicole Rhodes
Contributed to The Globe and Mail
Published May 2, 2021 Updated May 2, 2021
Comments
Text Size
Please log in to listen to this story. Also available in French and Mandarin. Log In Create Free Account

I can’t recall who the gift was from. Unfortunately, that detail is gone from my mind, like my son’s first word and how old he was when he spoke it. Terrible, I know. What can I say? I was in survival mode in those early years of parenthood. There was a lot of bawling going on here, and not just by the newest member of our family. But that is another story.

What I do remember about the gift is my initial reaction to it. When our toddler opened the box and pulled out the enclosed soft toy, my mind immediately went to the existing mountain of stuffed animals in our house. The mountain that went mostly untouched. I sighed. I knew that this orange knit cat – named Sasha according to the box – was going straight into that pile. I pictured myself having to bag up the pile and drag it to the curb at some point. My parent guilt meter went up several notches.

Before my son was born, my spouse and I had vowed to do things differently. Our home would remain an adult space and we would teach our child from the start that less is more. This was years before Marie Kondo and her tips for tidying; maybe we were ahead of our time. Under our vision, toys would be limited to one small basket, preferably void of plastic products and things that made noise. Who needs lots of stuff? Not us and not our child, surely.

We had no idea what we were up against. When the gift box containing Sasha arrived two years into our time as parents, most surfaces in our house were covered in kid stuff. Trying to contain the toddler universe that we were immersed in felt like making work for ourselves. We had discovered that we could live with pretty much anything if it kept the peace and kept our kid safe.

As I expected, Sasha went into the mountain of stuffed animals. Less predictably, however, the knit cat didn’t stay in the pile. I’m not sure why. I mean Sasha is sweet but looks unremarkable. Picture a medium-sized knit orange cat with a lopsided smile and a cropped purple sweater. I wouldn’t have thought that Sasha could hold a candle to Finnigan the fuzzy monkey or to the Tickle Me Elmo, but what did I know?

No doubt part of Sasha’s appeal came from its involvement in meal times. We were desperate for distractions, particularly when our son was in the high chair. Without entertainment, our toddler would fight the injustice of being required to stay seated while eating by flopping “bonelessly” or by using the infamous “clearing of the decks” maneuver, which involved the food on his tray flying everywhere. My spouse started to use stuffed animals in the distraction games with success. Under my spouse’s influence, Sasha would say silly things and play tricks by dropping ingredients on the floor. We knew we were on to something when our son started asking to go into his high chair to play the “Sasha game.”

In time, Sasha’s powers grew beyond distraction. If we were having a hard time talking our son into doing something (like staying with a babysitter or chilling out in the car), sometimes the knit cat could bring him around. Sasha’s involvement could usually avert a meltdown or at least buy us some more time, like a secret weapon. My spouse got very good at the ventriloquist thing. So good in fact that when our son was a little older and starting to question the world around him, I overheard him in bed whispering “if you can speak, Sasha, please do it now” over and over. In that moment, I wished with my whole heart that Sasha really could talk.

It wasn’t just my spouse and I that used Sasha to achieve certain desired outcomes. In time our kid learned how to use the knit cat, too. For example, I remember his excited announcement at one point that it was Sasha’s birthday the next day. Conveniently, Sasha had told our son what kind of cake and toy to get. We went along with it and had a birthday party. To some degree, it seemed like fair play. It seemed like a small price to pay for the comfort that Sasha provided to our son.

This comfort was particularly critical at bedtime. Sleep was challenging for our son for a long time and, as a result, for us. We discovered that our child liked to cuddle the knit cat at night and was more inclined to settle down if Sasha was there. This made the knit cat priceless in our household. If we had been robbed during that period, possibly the first possession I would have checked on would have been Sasha. Extended family members knew Sasha by name and all understood that great care was required when dealing with the stuffed animal. No one wanted to be the one to rock our sleep boat by misplacing Sasha.

We were so concerned about losing Sasha and the trauma that this would cause (for us all) that we purchased a duplicate stuffed animal as a backup. Unfortunately, when the intended backup arrived, we could see that our plan was flawed. As a knit toy, the smile angle was noticeably different, as was the sweater fit. Plus, the backup was brighter in colour as it lacked the wear and tear of countless cuddles. We didn’t even try to pass off this stuffed animal as Sasha. When our son saw the backup, he immediately named it Imposter Sasha.

Remarkably, our son is now a teenager and, if all goes as planned, he will leave home to attend university later this year. Sasha no longer has a prominent role in our day-to-day lives but I know that I will never take Sasha to the curb. We all love that knit cat.

Come fall, when I am an empty-nester, I might just pull Sasha out again to provide comfort to me. 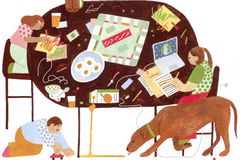 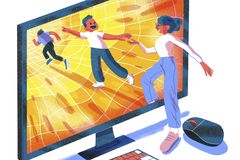 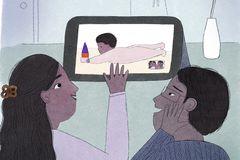