He screamed, he cried and he squirmed. He cooed and he ate and he slept – a little. I looked down at the wiggling infant swaddled in my arms, closed my eyes and breathed in the sweet smell of lavender and milk. I let my thoughts bounce in and out of the weeks and years to come; from rolling out Dr. Seuss books on wintry afternoons, to colouring in the alphabet in flimsy workbooks, all the way up to arguing with him about being on his phone too much. I felt the heat coming off the words as I imagined myself barking out rules like “no hockey sticks in the house” and “deodorant is not a suggestion.” Frustration and love would soon be indiscernible.

All I needed to know about raising a boy I had learned from watching my parents with my brother. Skinned knees, broken windows and loud music must be met with firm but fair discussion. Expect teenage anger, penis jokes and a wardrobe full of expensive sports apparel or stretched out music tees. There would be some lies, late nights and endless worry. I would not be blind as to what was to come. No question I would administer a special kind of nurturing to avoid the stereotypes of masculinity that disallow crying or expressing a feeling. I would raise a sensitive, mature young man. A stereotype of raising a boy-into-a-man was locked, loaded and ready to fire from the moment he relaxed into my tired arms and passed gas for the first time. I had all the confidence of a new mom with no experience and a lot of opinions. That was my first mistake.

“Please stop buying dresses off Amazon!” I begged him recently.

“But I really like this one,” he whined, with the cracked voice of a 16-year-old adolescent.

When the long, mauve-coloured strands of hair began appearing in sink basins, I had already long moved away from worrying about wearing deodorant and graduated to sleepless nights wondering if my son was happy, to his core, and whether or not I could protect him from people who didn’t understand the complexity and beauty of this dangerously spectacular kid. My sweet boy who had always loved dresses, wigs and Barbies, who came out when he was just 10 years old, was now a saucy, long-legged drag queen. My small collection of respectable heels were in constant danger of being stretched beyond recognition as he tested out colour and style preferences in my closet. How did I not see this scenario the day he was born? I saw baseballs and driving too fast, not stuffed bras and hairspray. Instead of hockey sticks marking pristine hardwood floors, I was met with nail-polish stains on soft-coloured couches. As a child, he twirled lacrosse sticks like batons and skipped down the field, sometimes toward the play, sometimes not. He draped towels across his head and played with them like hair. At school, he surrounded himself with girls and fought off the macho bullies with his sharp tongue. Bruises, taunts and humiliation still cracked his fortress daily. While many an attacker walked away unchanged or reformed, my son was not so lucky. He absorbed each experience like a cancer. As a parent, love and frustration were indeed indiscernible. All the struggles my husband and I thought we might face as parents suddenly left us looking like toddlers with umbrellas in a hurricane – totally unprepared for the force of our son’s existence. I was frustrated at the complexity of the situation and overwhelmed by love and the need to protect him.

“Just tell people you’re a boy who likes girl things,” was the depth of our help for many years. The teenage anger I once anticipated arrived – much earlier than it should have and much more purposeful. It wasn’t hormonal or random. It was directed inward or toward anyone that threatened his worth. I was heartbroken by the unhappiness the world had imposed on my son by not making it obvious that he belonged. He knew what made him happy: pink tops, dolls and high cheekbones carefully contoured with an artist’s skill. When he slept at night, he imagined a world where he could be himself; a chameleon made of light and colour. That world vanished each morning with reality, the way images spiral into nothing on a TV when the power goes out.

With therapy, a new school, lots and lots of family time and a healthy dose of TV series, such as Modern Family, Will & Grace and RuPaul, waking up is not as scary as it once was. For all the trail blazers, allies and therapists who braved the social storms so others could come out and play, there are no words. From being sad, angry and misunderstood, from hiding inside on a sunny day wearing his mother’s clothes, to becoming a witty and statuesque queen bopping to Britney in inappropriate heels is not a journey anyone can manage alone. We stayed with him as he grew to understand himself but more importantly, he stayed with us, forgiving our stumbles.

As special as he is, he can finally be normal thanks to his own strength and the courage of others to not only come before him, but to stand beside him while he waited his turn to step into the light. Nothing and no one will stop him; not a sideways glance, not a judgmental parent group, not a narrow-minded phys. ed teacher, and especially not a family who doesn’t always say or do the right thing. I can now badger him for all the regular things I imagined so many years ago. Like everybody else his age, he spends too much time on his phone and way too much money on Amazon – albeit on spandex.

When I look at him now, I still smell the lavender and milk, and remember the feeling of him squirming in my arms. I remember him at play groups with the princess puppets and giggle at the thought of him twirling in my nightgown. Jumping ahead to hockey sticks seems like a punchline to a joke I can’t remember. I love him the same as I did that first day. I love him enough to keep him from texting at the dinner table, from staying up too late and from distracted driving as he checks out his eyebrows and lip liner in the mirror. I will happily yell at him, like I will all my sons, to keep his hands on the wheel, eyes on the road and keep going wherever it is he needs to go. 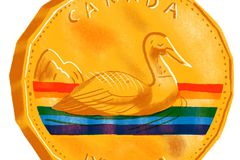