It’s 2 p.m. Do you know where your children are?

Incredibly, for much of this past summer, I did not.

It’s been one, very small, dull-silver lining of the pandemic: My children have been roaming the neighbourhood, without me.

If you’re over 60, you may not be aware that children no longer run around carefree in their neighbourhoods without direct adult supervision. If you’re under 30, you may be equally shocked to learn that this used to be a thing. Children would run off with their friends, nary to be seen until suppertime. This isn’t just a fantasy from movies and Little House on the Prairie storybooks. It actually happened. In real life.

And it’s happening again. This reclaiming of the streets by children was an unintended result of the directive to shelter in place.

In my home base of Calgary, the last day of the Before Times took place, somewhat fittingly, on Friday the 13th. On that long-ago, mid-March morning, I hesitated to send my two older children – and one of their friends who had spent the night for a sleepover – to school. I did send them, in the end, but that day marked the first of many lasts. The last day of in-class learning for that school year. The last day of casually having friends over for supper or sleepovers. The last day of driving other people’s children in my car.

After the lockdown was imposed, my three children, my husband and I hunkered down obediently and we saw no one for six weeks.

In truth, it wasn’t that hard to maintain physical distancing in March and April. We’re a busy, active family and, at first, the enforced downtime gave us a welcome breather.

The weather held up its end of the bargain beautifully, with howling wind, blowing snow and temperatures below -20 C. We stayed inside, we stayed together and we made ourselves acquainted with the delights and horrors that Netflix has to offer.

That was fine for a while, but then, well, if the four-year-old can go cycling with her friends, then why not the nine-year-old and the 11-year-old?

I’m aware that the only officially sanctioned allowance for playmates back then was a “bubble family.” But finding an exclusive bubble family was not just a tall order. With the age spread of my kids, it was impossible.

So without entirely meaning to, we stumbled into a customized, localized loosening of the lockdown, which at last count includes kids from at least a dozen families. It’s not one exclusive bubble family but several, small and, most importantly, easily traced concentric circles of neighbourhood kids.

It’s not a free-for-all either. We’re following rules.

Rule No. 1: Everyone must stay outside. No going into anyone’s house – not even to use the bathroom. Even with the resumption of in-class schooling this September, it’s best to hedge our bets when we can.

Rule No. 2: Everyone must keep a two-metre distance. The older children understand this perfectly well, but the younger ones need constant reminders. “Hockey sticks, girls! Stay one hockey-stick-length apart!”

If it seemed somewhat illicit, at least back in May and June, it wasn’t exactly verboten.

The gatherings started out in the alley and the yard, but the roaming distance steadily grew. With the cancelling of spring soccer, swimming lessons, overnight camps and family vacations, there was always a buddy willing to play. One by one, families wrote off the emergency online schooling as an exercise in frustration and futility, and a tacit agreement was wordlessly reached: The children of 2020 were about to experience history’s longest ever summer break from school.

The tipping point had been reached – there were now enough children to form feral packs. And with safety in their numbers, the kids began enjoying the sort of far-ranging freedom I remember from my own childhood in the 1980s and early 90s.

The preschoolers started ducking out of sight on their bicycles, circling around the block and spending exhilarating moments just beyond our line of vision. They also took to roving on their own from yard to yard, while their adults sneak in a few more minutes of work from home offices.

For several weeks the boys worked away at a fort in the ravine until the mosquitoes reclaimed the gully. The girls found an injured baby mouse and kept it alive with goat’s milk until nature reclaimed the mouse. The kids were busy. They had projects on the go and the number of hours they stayed away grew ever longer.

This is how it came to pass that I could tell the older ones the seven little words I had been waiting my whole motherhood to say: “Just be home in time for dinner.”

I suspect my children and the other kids in my neighbourhood will have a hazy sense memory of freedom from summer 2020. A summer of climbing trees and crossing the street and talking to strangers and going to the park and organizing water balloon fights – without Mom and Dad. A summer of donning masks and ambling to the Starbucks and buying bright-red sugary drinks. A summer of making plans and figuring things out without an adult stepping in to do the planning and the figuring for them.

Will this far-ranging play continue on weekends and after school? Truthfully, I don’t know. The play-ability of a neighbourhood ultimately depends on how easy it is for one kid to find other kids. All bets are off once children return to hockey, ski lessons and after-school care and it becomes hard to find someone to come out and play.

What I do know is this: Unattended children used to be ubiquitous. This summer – even if it was just for this one, long, strange summer – they were back.

Working in Quebec’s long-term care during COVID-19 was a baptism by fire
September 13, 2020 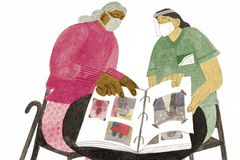 Please stop asking my Canadian-born child, ‘Where are you from?’
September 10, 2020 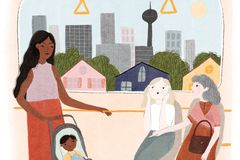 Travelling to the Far North was a journey of reckoning for me
September 8, 2020 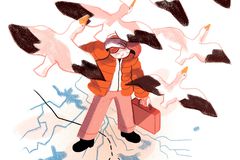