We had some rules about getting a dog: female, 40 pounds, short-haired, and most importantly, not anxious.

“You’re enough,” my partner said, not unkindly, but because there isn’t room in our tiny Vancouver apartment for more anxiety.

We failed on all counts and ended up with Shermy, a two-year-old male dog. Sixty-two pounds of constant shedding, thanks to his golden retriever/lab/shepherd/collie mix undercoat. The places I find fur mystify me.

There are things people don’t tell you about getting a rescue dog, like your dog may be afraid of garbage cans. Baby strollers. Bike helmets. Umbrellas. Cameras with telephoto lenses. The hiss of a bus lowering. Sneezing. The ironing board. The iron.

No one tells you about doggie Prozac, or that their dog is on it and yours might need to be too.

Instead, we’re bombarded with moving stories about rescue dogs whose personalities blossomed once they found good homes. We consume sob-inducing videos about dogs who understand their good fortune and become the goodest doggos ever seen after they’re adopted. We see dogs who were afraid to be touched become cuddle-obsessed babies.

I devoured those stories before adopting Shermy. Change a dog’s life, and by doing so, change your own. I bought the narrative because that’s what friends and acquaintances, not just the Internet, told me.

No one mentions the dogs that never reach normal ‒ until you get your own problem furry friend. Then, the stories you hear from fellow dog-owners. Dogs on three or four anxiety meds; dogs who hate their owners’ partners; dogs who ate the entire couch; dogs that run a half-marathon and still have energy to jump on horrified strangers.

Of course, no one tells you your dog may be reactive or have fear aggression and anxiety brought on by improper socialization, and they may never get over it. Our dog trainer looked at us sympathetically as she broke that news to us.

We weren’t surprised, exactly. Most of Shermy’s actions were recognizable. Dog anxiety doesn’t necessarily manifest that differently from human anxiety, but I can articulate my symptoms before my behaviour gets out of control. I know what the racing heart, trouble breathing, catastrophic thoughts on repeat, panic attacks and tingling fingers mean, and can usually identify what’s causing them.

Canines don’t have that luxury. The only way Shermy lets me know how he’s feeling is through his actions, which are immediate and tend to fall into the less-than-acceptable categories of snarling, yelping and furiously lunging with his hackles up. I see people’s judgment sometimes: I’m the bad dog-owner with the bad dog.

Shermy’s anxiety is noticeable. He lashes out at strangers, startles at noises (and sometimes at nothing), and melts down at the slightest change in routine. Predictability is useful in anxiety management, but often impossible. There’s only so much I can do ‒ for him and for myself. I’ve snapped at strangers as well, because anxiety overrode my ability to behave in a socially responsible way.

Shermy can be embarrassing at the park because he’ll bark incessantly at the dog he wants to play with. No one wants to play with the barking dog. He’s more likely to drive a furry friend (and their human) away by doing the wrong thing. He’s a master of avoidance, and will pull me as hard as he can away from something that makes him uncomfortable. When I’m anxious, I avoid people and places too ‒ even people and places I usually like.

Anxiety dulls people’s abilities to react appropriately or make rational decisions. Trauma, real or imagined, is magnified by this frantic thundering in your chest that doesn’t belong, but has made room for itself anyway. Threats seem to come from every direction and every task feels insurmountable. When Shermy can’t cope, he can’t react in a calm way. Everything becomes a disaster. Life is unmanageable. I get it.

Humans don’t always pay attention to how anxious feelings make us act. We fixate on how we feel, not on what we’re doing in response to the feelings. My own behaviour patterns are clearer to me after watching Shermy’s reactions.

I would like to be able to tell you that having an anxious dog has made it easier to treat myself with compassion and empathy. That I’ve softened toward myself when I’m feeling anxious for “no reason,” instead of being annoyed with my stuttering progress toward less anxiety. It would be a nice story ‒ a tidy ending. It would better fit with the narrative we see on Instagram and YouTube about dogs who thrive in their new lives and the people who experience new levels of happiness because of their pets. These are lovely, heartwarming stories, and we need simple joys right now.

But that’s not what’s happened. Sometimes, Shermy’s car-whimpering, leash-pulling, startling, midnight-barking, pacing and aggression toward people half a block away cause me more anxiety. His unpredictability upsets my own need to avoid surprises.

The thing about Shermy is that he is a good dog. He puts his own toys away. (Only sometimes. He’s a dog.) He hasn’t devoured any designer shoes. He snuggles like a champ and plays adorably with toys. He zooms around with other dogs, who don’t bother him the way unfamiliar humans do. When we sleep in and he needs to pee, he slides his head under my neck to wake me up. We stick our hands in his mouth to clean his teeth and he lets us clip his toenails without flinching. He doesn’t hump strangers, roll in mud, chase cars or beg for food. He sits contently by my desk for hours while I write and has no idea that I’m sharing his embarrassing secrets with everyone. If anyone but him is being hugged, he trots over to join in. He’s a decent listener ‒ if there are no squirrels around.

Shermy’s main issue is he believes that every little thing in the world, from empty garbage cans to hats left behind on boxwoods, to skateboarders and the husky down the street, is going to attack him at any second and that he needs to attack first. Alternately, he’ll dig his heels in and refuse to walk past a shopping bag or an oddly shaped bush. Anxiety loves avoidance.

There are beautiful days when Shermy moseys on his leash without ripping my arm from its socket and wears a giant, squishable retriever grin. People smile at him when we walk past and I imagine them thinking, “What a sweet dog.” Sometimes, strangers tell him he’s a good boy. He usually chooses that second to bark at them.

Shermy’s good-boy moments remind me that he is more than his anxious behaviour. He’s more than one thing. He loves us and we love him. Mostly. If Shermy is more than his anxiety, then surely I am too. That’s helpful to remember on bad days when panic is winning, nothing is normal, and I still need to function like a human adult. Maybe this is a heartwarming dog story, after all. 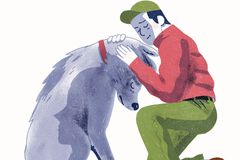 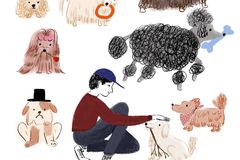 How your dog can keep you sane in the coronavirus crisis
March 26, 2020 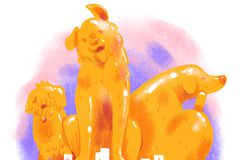