Madigan Ruch
Contributed to The Globe and Mail
Published October 23, 2019 Updated October 23, 2019
Comments
Please log in to listen to this story. Also available in French and Mandarin. Log In Create Free Account

My mom used to tease me that my first words were: “I’ll do it myself.”

Maybe it was because I was an only child, and spending hours alone left to entertain myself cultivated an unhealthy desire to be self-reliant, or maybe it’s just some unalterable genetic composition completely out of my control. Whatever it was, driven by some internal force, I was fixated on proving that “I could handle it.”

My stubbornness and obstinance, which my mother carefully rebranded as independence and strong will, meant that I wanted – or rather, needed – to do everything on my own.

At 12, I was co-ordinating my swim-practice carpool schedule with the other moms and mapping out my six-year plan to university. My parents were thrilled. While their friends were hounding their kids to finish their homework or stop watching TV, mine were unbothered about whether or not I’d do the right thing: They always assumed I would.

I wanted everyone to think I was capable, hoping if they believed it then I would, too. Because despite all of my efforts to appear flawless, I didn’t feel like an ounce of it was true. On the outside I presented a façade of control; on the inside, I felt as though a thousand strings were pulling me in all different directions and it was only a matter of time before I fell apart.

As life became more complex, perfection became harder to achieve. I felt like I was falling, and I had no idea when I would hit the ground. Panicked, I pushed myself harder while punishing myself more severely for my shortcomings.

My daughter has ADHD. My parenting used to make it worse

But after years of unrelenting pressure, I was beginning to crack.

Simple tasks felt nearly impossible. Brushing my hair and eating three meals a day didn’t feel worth it. So I stopped. I stopped playing sports and cancelled my plans with friends, choosing instead to lie in my bed as my brain thought about everything and nothing at once.

The people who knew me didn’t recognize me. My parents, once so confident in my abilities, were scared. They took me to the doctor and after tests and meetings and discussions I finally had my diagnosis: I was depressed. And anxious. All my indicators were virtually off the charts.

I expected to feel liberated, like attaching a label would somehow make it all better. Instead, it just confirmed what I knew all along. I wasn’t well, and I hadn’t been for a long time.

Despite doing everything I was told, reading every wellness blog post about the “12 steps to happiness,” I didn’t feel any less depressed. I still felt hopeless, like a boat taking on water with no help in sight. I was angry at myself, believing that it was my own lack of strength and incapability that prevented me from overcoming my sickness.

I couldn’t envision a future where anxiety and depression didn’t rule my life. They had been a part of me for so long I didn’t know who I was anymore. I felt out of control. My life was no longer my own. So, just days before my 16th birthday, I tried to end it.

There isn’t a day that goes by that I don’t regret my actions. Regret letting myself follow down a dark path for so long without calling for someone to help. Regret for causing my parents, my friends and my family so much pain and confusion.

I remember my parents, standing outside my hospital room, speaking in hushed tones, trying not to wake me. As if I could have slept. My dad sunk to the floor. I’d never seen him cry before.

“How could we not have known?” his voice trembled.

It’s not that there weren’t warning signs. No matter how hard I tried, I couldn’t keep everything bottled up. It’s just that when I did open up, if only a little, I was told that my emotions were the product of sickness, and with the right remedies, I would get better. But there weren’t words to describe what I was experiencing, and I felt if I couldn’t relay it to others, there was no way for anyone to understand.

It wasn’t until I was sitting in the hospital – admitting to my parents, the doctors and myself that I realized how harmful it was to internalize what I was feeling. I kept everything locked inside of me, never letting it out, hoping if I ignored it for long enough it would go away. But if I never acknowledged or dealt with what I felt, there was no way of moving forward. My struggles kept mounting, and eventually, I crumbled under the weight.

I had to reach the darkest point of my life to realize that I couldn’t do everything on my own, and that this was okay. I was not weak for admitting that my woes were no longer something I could handle by myself. I felt braver and stronger finally telling someone what I had been going through than I had spending years internalizing my suffering.

A year later, I’m still dealing with the ramifications of my suicide attempt, and of the years I spent trying to achieve perfection. My parents still don’t always know what to say. But they’re there, and they’re trying.

Opening up to my loved ones has not meant that my depression and anxiety are gone completely. Overcoming mental illness is slow, agonizing and filled with many turns and bumps in the road. There are times I feel I’m going down a path that might not lead to my final destination. But I know now that I’m not alone. It took me a long time to learn this. To learn that my shoulders do not have to carry all the weight upon them, and I am no weaker for allowing someone to share the load.

Can the Raptors do it again? Maybe if my family cheers loud enough
October 22, 2019 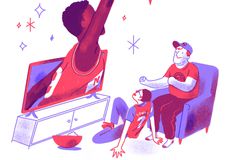 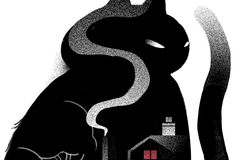 The odd encounter that pulled Dad out of his Alzheimer’s fog
October 22, 2019 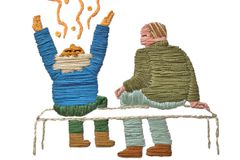