In the early years, in rental homes, shelving was of the plank and bricks-at-the-ends variety; later, it was IKEA’s do-it-yourself stacks that never failed to sag in the middle. When we bought a proper house at last, it came with a proper set of book shelves – permanence. Over almost 50 years of marriage, several cross-country moves and the raising of our four children, books were ever present in our lives.

On moving days, each box of books was labelled: A to C and so on, reflecting the name of the author and making the task of repositioning our lives, if not any easier, possibly more efficient. Given the on-call demands of domesticity, the organization was essential. Over time and in a natural sort of arc, the demands lessened in one arena while rising up in others, but always as a part of our lives were the books.

My husband’s often biographical and historical tomes described the sweep of ages and the dramatic political shifts he found there. When he read, sometimes his body moved in a language of its own, absorbed by the words on the page: a wriggle of pleasure or a straightening of his back, imagery of all kinds providing a means of escape from the rigours of his work, which in part, meant more books and mountains of papers.

Decades later, when my husband became ill, it meant a temporary return to the city and into a rented, unfurnished suite: therein a minor literary challenge as I tried to cope with the rapidly changing situation. Luckily, I found a shop nearby that rented furniture, including a perfect bookshelf – tall enough and broad enough with shelves deep enough that it needed no adjusting. Though he could no longer read, I moved as many of our books as I could manage into the trunk of my old Honda, each box loaded with his favourites. I hoped their familiar spines might trigger a fond memory and a smile of recognition, maybe a scent of home. Finally in place, the bookshelf stood beside him in his wheelchair near the gas-burning fireplace. Not the roaring, wood-burning ones of old, aflame with beach-combed logs or wind falls from the back garden, but a good-enough, bright facsimile, warming his space at the push of a button.

Years later, widowed and alone, I was on the move again. For the first time in five decades I was confronted with the collected works of our lives. The books described us and the many transitions we had made from student-salaried, stay-at-home parents to mobile professionals with varied interests: yes, way, way back, all the way back to find our ragged, treasured golden oldies...including, for heaven’s sake, European travel on $10 a day. Other titles reflected the serious, political cross-Canada preoccupations of the 1970s nestled snugly alongside Nobel Prize winners and many a wannabe. Each decade’s new authors’ works; fiction, poets and world leaders, bird books worn and well-referenced, save-the-whales titles and the works of more than one environmentalist. Mountain climbing years in the Rockies and in the Alps triggered my husband’s interest in geology; those titles had been shared with my father, a “rock” man himself, giving them something other than boxing to chat about. And that giant Webster’s so heavy the children had to belly-flop onto the carpet to turn its pages, some dog-eared Oxfords, a prized set of red-leather bound Encyclopaedia Britannica. Faded atlases; past adventures highlighted ... sigh, even those of fantasy.

Early titles of mine offered escape and stimulation for a housewife and mother: history, biography, fiction – early and modern; the requisite feminist tomes which, not surprisingly, triggered many a heated discussion; French and Spanish language texts bearing scribbled, optimistic notes; gardening experts’ advice and cook books, each one introducing me and the family to the culinary fad of the moment.

Back again to the Fifties and our landlord’s bookshelves in a furnished sublet in Old Montreal, some of those various, rich new titles live in my memory still. That amazing resource helped me stay awake in the wee hours as I breast fed our daughter and during the long, lonesome ones when he was a medical student “on call” at the old Royal Vic. Soon, Dr. Spock’s wise words for new parents filled most of my available reading time, or as much as I could manage in those days with four babes under three.

Summers were spent at our beach-side cabin, the one with no electricity and no facilities: a simple life. Books were essential and often shared with a dear friend from across the Island. Wonderful differences in our favourites, mostly fiction, made for a few pleasant surprises: Her library was an eclectic, rich resource allowing for transportable days of reading on our sun-drenched dock.

It has been more than 20 years since he died and while today my books bear the names of a more current list of authors, there was no escape from the final sorting challenge. It was easy to decide about a paternal grandfather’s fragile antique tomes (they were taken by antique bookseller MacLeod’s Books) or the countless labelled, boxed stacks (which went off to the local library for its pre-Christmas sale). There was a happy sharing of a few titles with the children and grandchildren who found something of interest. Piles more off to the Goodwill, where I hoped someone might delight in other voices, wondering as I did so if that reader could sense the bittersweet farewell of a shared lifetime.

Now in my dotage I am resettled, and the thinly stocked shelves that came with me are inevitably filling up with varied, tantalizing titles - no e-books here, well, not yet anyway –just the half-dozen waiting on my bedside table calling out for a sleepy, nighttime decision. Today, my still-able hands hold the delicious weight of stories told on textured paper – tactile pleasures enhancing the whole. And today we’re a different us, so those new titles reflect other worlds, ripe for discussion and reflection while once again coming to life at the turn of a page.

Facts & Arguments
Have books become something we’d rather look at than read?
June 1, 2017 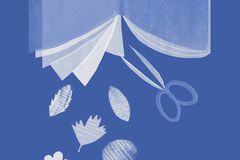