They sat on the curb, spilling higgledy-piggledy out of a slumping box, dirty and dusty from years spent in the garage, neglected and abandoned by their owner. Matthew’s boyhood trophies, glories from his years of playing badminton and soccer, were the last remaining trace of moving day. I was cruising past my daughter and son-in-law’s home hoping to catch one last glimpse, say one final goodbye before they left. But the moving truck had gone. The street was silent, the driveway empty. Feeling bereft and sad, I could not help myself. I wrestled the heavy box and its contents into the trunk of my car and brought them home.

For my son-in-law, it was hard to discard nearly 50 soccer and badminton trophies, to set them out for the garbage. These were reminders of games in which he excelled. Now they became keepsakes no longer kept for the sake of keeping. Out they went. He saved his medals, easier to store, but moving house meant it was time to downsize, to make some difficult decisions.

Matthew’s first trophy was awarded when he was six and his last - at 18 - was when he stood runner-up National Badminton Champion in a Quebec City tournament. The progression of his successes was recorded on all the metal trophy plates. These records of time, energy and competition represented years of his parents' dedication to his interest in sports.

I used to collect shoes. Now I covet masks

Parents invest much time and energy in their kids' games. Their social life can revolve around their children’s sport, and tournaments in distant cities are occasions to travel. Sometimes parents are so attached to the memories of past victories they store the old trophies in their basement; it can be more meaningful to them than to their children.

Matthew’s dad was a soccer coach for many years, then Matthew followed suit and coached teams for his own children, as have my two other sons-in-law in sports that engaged them in their youth. What will happen to their trophies?

Over the next few days I cleaned and shined. I catalogued the information on the metal plates in order of year, and set the trophies on the dining-room table, itself polished to a high shine, the better to display them. The soccer awards were most distinctive and action-packed. Topping a high base, often being a cup, a figure kicked high, arms outstretched, with the soccer ball attached to the toe. Several needed slight repairs, which I undertook before photographing them. Two of the wooden badminton awards, I noticed, were created in the shop program of a Timmins high school, no less rewarding for their simplicity and distinctive for their heft. Who wouldn’t covet a trophy like these on their shelf, whether earned or not? I chose five distinctive ones for myself and displayed them on my book case.

In anticipation of Val and Matthew’s visit the following week, the container pots out front sported two tall matching trophies as centrepieces. Their striking emerald-green bases rose eye-catchingly above the colourful flowers. Matthew noticed right away. Liking my design, he took them home.

I sometimes wonder if there is a resting place for trophies that belonged to children who have become adults? Like the elephant’s graveyard, it is a mythical location that does not exist. Shelves, basements, thrift shops, the curbside, fulfill such purpose. Sometimes sports clubs will purchase old trophies, remove the nameplates and reuse them. I could not find a trophy shop that would repurpose Matthew’s haul. And a thrift shop did not seem like a respectful place for these honours.

And yet, while thrifting last summer, I remember a young lad asking the shopkeeper if there were any trophies on sale. He had purchased several a few weeks before and wanted more to display on his shelf. The allure of trophies, for him, could be a substitute for winning, perhaps representing aspirations of triumph and success. Or was he jealous of friends who had their own hardware? Maybe these masterpieces of design were desirable for their appearance. And what luck if the inscribed name happened to be a famous athlete from the past.

In the end, I couldn’t keep Matthew’s old treasures. Instead, I found small boxes that would each hold five or six trophies. One by one, the boxes sat on the curb, on the route many children used on their way to and from school. Passersby could see these gleaming statues, as could I from my kitchen window. When one box disappeared, another took its place.

I watched a young boy wobble up the street on his bicycle, trying to balance with several trophies under his arms. I saw a mother carried trophies as she walked her boy to school. Two youngsters came to the door, asking me to set a box aside for them to collect on the way home. My hope is that Matthew’s trophies are a risen-from-the-grave story, that they will be recycled, reused, restored to their former glory and pride, and sit on display for a time.

By the end of the day, the trophies were gone. The last empty box lay on the side of the road, overturned by the wind.

My mother offered Newfoundlanders room and board, and hope
October 11, 2020 Why is being mistaken for an immigrant an insult?
October 7, 2020 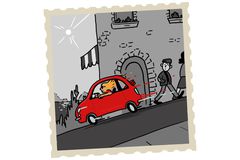