One night every month, Chris Brown, a top chef in Toronto, lets amateur cooks buy their way onto his kitchen crew for a multicourse fundraising dinner. And every month, the vast majority of those amateurs go bug-eyed when he reaches for the salt.

Brown, who runs the catering division at The Stop, a food-focused charity, doesn't chastely sprinkle a few grains from a shaker before serving, the way most home cooks do. He seasons little by little, at almost every stage of cooking, tasting as he goes. Meat and poultry get the blizzard treatment – he seasons from a foot above the counter, letting kosher salt fall like a snowstorm from his fingers.

"The meat should look like it's completely covered in salt, like the sugar on a funnel cake," he said.

Yet what's most surprising is that the chef's dishes don't taste salty. They taste heightened, but balanced. His greens taste like greens, only supercharged, his meats intensely meaty, his chocolate cake spectacular. (Dark chocolate and sea salt are one of life's great pairings.) His cooking tastes the way cooking almost never tastes at home.

Most home cooks don't know how to season – they don't use nearly enough salt, let alone acidity and bitter or savoury seasonings, the simple but critical flavour-heighteners that can take even average cooking from drab to delicious. Or as Makoto Ono, the talented chef behind Vancouver's Pidgin restaurant, recently put it, "Seasoning is the biggest difference between home cooks and chefs."

But the good news is that seasoning properly, though it takes some practice, isn't all that hard. Once you learn a few tricks to getting salt, acidity and savoury in balance, you'll be seasoning like a pro.

The king of seasonings: salt

Now that the HeartSmart set – that vast swath of Canadians who are terrified of their salt shakers – is staggering toward the fainting couches, a couple of precisions. Brown, like most good chefs, uses kosher salt and sea salt, which are typically far less sodium-dense by volume than so-called table salt. A teaspoonful of table salt (the recommended upper-limit daily intake for most adults, according to health professionals) contains 2,300 milligrams of sodium, roughly the same amount as a tablespoon of Diamond Crystal kosher salt; that funnel-cake like dusting doesn't amount to nearly as much as you would think. (Portion size is important, of course: If you plan to eat that beautifully seasoned, 12-ounce steak by yourself, all bets are off.)

And Canadians get just 5 per cent of their daily sodium intake from home cooking, according to Health Canada, while 77 per cent comes from processed and restaurant food. Translation: Lay off the tinned soups, processed deli meats, packaged pita pockets and Tim Hortons sandwiches – a single Tuscan Chicken Panini contains a whopping 1,590 mg of sodium – and save it for the good stuff.

First thing: Buy kosher or sea salt. Table salt falls through fingers too easily for accurate seasoning, and it dissolves so quickly that it's all but impossible to judge quantity by sight. Many chefs swear by Diamond Crystal brand – its crystals are uniform in size. But whatever brand you use, pick one and stick with it. Keep it in a bowl or a salt pig (a covered bowl with an opening for your fingers), and season with your fingers, letting it fall from at least a foot above your food so that it coats ingredients evenly. Before long, you'll be able to season largely by sight and feel – a good pinch or two for sautéeing green vegetables, a smaller one for sunny-side up eggs.

Timing is also crucial. "Every stage you go, add a bit of salt," said Ravi Kanagarajah, the palate behind Toronto's excellent Ravisoups chain. When Kanagarajah makes a soup, he adds a little to the onions as he starts to sweat them over low heat (the salt also draws out their moisture, which concentrates and sweetens the vegetables), then again when he adds more vegetables, and liquid, and again at the end. Season, taste, taste, season: You should be doing it at every stage. That way, every layer of flavour has punch and presence.

"If you wait until the very end, the soup only tastes like salt," Kanagarajah said. (Just remember that liquids lose volume as they simmer, so take it easy; if a liquid reduces by half, it'll taste twice as seasoned when it's finished.)

When blanching vegetables such as green beans or Brussels sprouts, or boiling pasta, season the water instead of the ingredient, and season it heavily – up to 1/3 of a cup of iodized salt per four litres.

With meats, salt the way Brown does: aggressively. Even then, you may need more. If you slice a dense piece of meat such as flank steak or duck breast before serving, taste a piece. Is it flavourful enough, or bland on the inside where the salt couldn't reach? Like many good chefs,Ono typically finishes sliced meats and many vegetables with a very light dusting of flaky Maldon sea salt for texture and punch.

And remember: Our seasoning preferences aren't hardwired at equal, predictable levels. They are learned, through eating. Trust your palate.

The importance of acidity

Next to salt, acidity is easily the most important seasoning: It cuts through richness and sweetness, brightens otherwise dull ingredients and underscores flavour by refreshing your palate. Acidity also happens to reduce the amount of salt needed to make a dish pop.

If a meat or pasta dish tastes cloying, vegetables uninteresting, or dessert too sickly sweet, it's a good bet a punch of acid can fix it.

A squeeze of lemon or lime can transform a lentil soup, say, or braised pork tacos, and a last-minute Microplane grating of Meyer lemon zest brings pancakes with maple syrup alive.

Brown puts a squeeze of lemon in almost everything just before he serves it. Few things can improve a gravy like a splash of red wine vinegar, he said. Ono makes sure there are always acidic elements on meat plates, whether pickled vegetables, mustard seeds or a citrus-focused sauce. Claudio Aprile, of Toronto's Origin restaurants, loves using Asian citrus like calamansi limes or yuzu, depending on what he's cooking, he said; he often pairs aromatic yuzu with raw fish.

The options are almost limitless: sumac powder, tart berries, green mangoes, tamarind and even brightly flavoured herbs such as shiso are all great sources of acidity. The key is knowing what kind to use and how much. Zest typically has a more pronounced flavour, while in small quantities juice integrates better with a dish. Most of the time, acidity should be a part of the substructure only, a supporting actor to make the main ingredients pop.

Another good rule: Remember the cuisine you're working in. Lime pairs naturally with Mexican food, where lemon can be all elbows; tarragon vinegar works with many French dishes, and tamarind with Indian. For the most part, acidity is best added right at the end of cooking.

The bedrock of flavour

Savoury seasonings give dishes what can only be described as lip-smacking flavour: meaty, cravings-inducing umami depth.

Parmesan cheese is a key source of umami: When you drop a nub of Parmesan rind into simmering chicken soup, or grate Parmesan over spaghetti Bolognese, you're amping up the dish's savoriness. Bacon is another major source. It's no wonder so many hamburgers now feature lashings of bacon jam. (There's even a burger chain in California called Umami Burger. Its burgers come stacked with roasted tomato slices, white soy aioli, Parmesan crisps and shiitake mushrooms, all major umami sources.)

Yet savoury is often the bedrock of a dish, rather than a last-minute seasoning: Ramen broth, for instance, is often built up from simmering Japanese fish flakes, shiitake mushrooms and dried seaweed, all three of them major umami ingredients. And umami doesn't belong in everything, Brown said. A little bit can go a long way. Remember, too, that umami ingredients are often naturally salty.

The best place to start is with common, user-friendly umami boosters such as miso, Parmesan, tomato paste (try adding some to caramelizing onions) and Thai fish sauce, or simply to toss a handful of shredded Japanese nori on a soup.

The power of umami

Whip miso paste into mayonnaise as a simple condiment (it's brilliant with French fries), or whisk it with melted butter, mirin and sake to glaze salmon or trout.

Many of Asia's greatest hot-sour-savoury-salty-sweet dishes are built on fish sauce. Heat some sesame oil to smoking in a wok or sautée pan, add blanched green beans, some chopped garlic, a squirt of sambal oelek chili paste, a couple dashes of Thai fish sauce and soy. Finish with a squeeze of lime.

Why does my soup stock taste like chicken water?
February 25, 2012 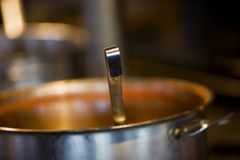 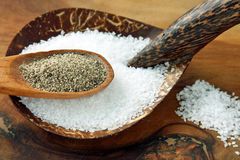 This little umami tube packs a gigantic 'flavour bomb'
May 24, 2011 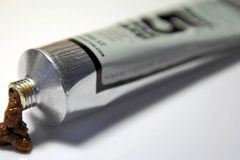 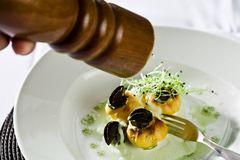 Home-smoked salts add zest to party menus
November 27, 2009
Six ways to turn ramen into gourmet goodness
September 13, 2011
Follow Chris Nuttall-Smith on Twitter @cnutsmith
Report an error Editorial code of conduct
Due to technical reasons, we have temporarily removed commenting from our articles. We hope to have this fixed soon. Thank you for your patience. If you are looking to give feedback on our new site, please send it along to feedback@globeandmail.com. If you want to write a letter to the editor, please forward to letters@globeandmail.com.
Comments