As one of the original eight wineries in the Okanagan Valley, CedarCreek Estate Winery has championed quality winemaking practices and a vineyard-specific focus from the start.

Since its inception in 1987, the Kelowna winery has amassed countless awards from major domestic and international competition, including three winery-of-the-year titles, two from the National Wine Awards of Canada and, most recently, from the 2019 InterVin International Wine Awards. But chief winemaker Taylor Whelan is too focused on the future to take a victory lap.

“We’re in a constant state of evolution here,” says Whelan, who grew from harvest intern to cellar worker to finally taking control of winery operations in 2016.

Now part of von Mandl Estates, a group of premium wineries in the Okanagan established by Anthony von Mandl in 2014, CedarCreek has benefited from significant investment in equipment and extensive renovation to the production and hospitality facilities.

The original Mediterranean-style buildings have been updated with a sleek, modern design that welcomes guests to the newly renovated tasting room and Home Block Restaurant. Construction continues on a separate lodge for wine club members slated to open next spring. “We’re looking to usher in a huge change to the level of winery experience offered,” Whelan says.

But the excitement surrounding CedarCreek’s development goes deeper than bricks-and-mortar and private tasting parlours. If one were to look for a winery that’s emblematic of the changes afoot throughout the Okanagan and British Columbia’s wine regions, CedarCreek is a great case study.

Whelan and viticulturist Kurt Simcic, who was hired from Giesen Brothers in New Zealand, have worked to obtain organic certification for the 50-acre vineyard that surrounds the winery. Ecocert has certified the estate’s grape growing and winery operations as organic starting with the 2019 vintage. All of the vineyards that feed CedarCreek’s production are expected to follow suit until the whole range is organic.

The winemaking team spent years continuing an extensive audit of the site’s plantings of chardonnay, pinot noir, riesling and other grape varieties suited to the cool climate of the site. “We have 20-year-old pinot gris vines, 30-year-old gewurztraminer vines," Whelan says. "… Is the best use for these really a $19 bottle of wine?”

Nine blocks on the estate yield 14 different wines for the CedarCreek stable. Whelan explains that the new barrel cellar and equipment allow the winemaking team the opportunity to focus more on and small batch lots.

Since becoming chief winemaker, he has launched five new reserve wines, including the Platinum ehrenfelser, Platinum gewurztraminer and Platinum syrah, which is a rare reserve that comes from a vineyard in Osoyoos.

He has also improved the quality of the winery’s estate range, a well-made collection of white and red wines that retail at the winery for $19 to $27. The entry-level chardonnay, pinot noir and riesling are largely sustained by the winery’s home block, with slight additions of fruit from nearby sites. The resulting wines have more harmony and balance.

“Our overarching goal is to centre our focus on 5445 Lakeshore Road,” Whelan says, referring to the winery’s street address.

To that end, an additional 100 acres located beside the winery was purchased to expand production. Whelan says there are plans to plant 30 to 40 acres of grape vines and establish a concept farm, including livestock and vegetable patches, for the restaurant and winery’s use.

Whelan hopes to employ more biodynamic practices going forward. Philosopher Rudolf Steiner introduced the principles of biodynamics in the 1920s. A major thrust of the intense form of organic farming is that a farm should be a holistic ecosystem as opposed to a commercially efficient monoculture. As a result, CedarCreek is likely to become more like Old MacDonald’s farm, with a dramatic array of birds and animals making themselves at home.

The winemaker also serves as part of a steering committee looking to create a separate appellation for the southern Kelowna area that will allow producers to raise their profile. Currently CedarCreek’s wines carry the broader Okanagan Valley appellation.

“It’s tentatively called South Kelowna Slopes,” Whelan says. “One of the hopes of the committee is to narrow the spread of varieties to the ones that make the most sense in our specific growing conditions.”

Golden Mile Bench, Okanagan Falls and Naramata Bench have recently been approved as sub-appellations, which helps promote the diversity of the different regions up and down the valley.

As gratifying it is to receive critical acclaim and be able to properly welcome guests to the winery again after years of renovation, Whelan says he’s unable to savour the moment. He’s restless to reach his next goals.

The wines he’s making now are even better than before, he says. “I firmly believe the future is even brighter for those labels.”

Two CedarCreek wines lead the list of recommended wines for this week, alongside three other notable recent releases from top Canadian producers.

This bright and ripe pinot noir benefits from a large portion of Wismer Vineyard fruit that was originally set aside to be a more expensive single-vineyard release. Winemaker Thomas Bachelder felt it didn’t make the grade, so it’s adding considerable weight and intensity to this entry-level release. This is ready to drink and will continue to develop in-bottle over the next three to five years. It’s part of Bachelder’s exciting online of distinctive Niagara pinot noirs and chardonnays. Available direct through bachelderniagara.com.

This is a flavourful Okanagan pinot noir coming from the warmer Black Sage Bench region near Oliver. Its bold intensity of juicy fruit demands attention, which makes this ripe and fragrant house style really stand out. Available in Ontario at the above price, $35 in British Columbia, direct from burrowingowlwine.com.

CedarCreek produces two collectible reserve pinot noirs that are worth the splurge, but this offers the best value for the price. Produced from grapes from the home estate, this is an expressive and fruity pinot noir, with an easy to appreciate core of berry and cherry accented with spice and earthy notes. Available at the above price in British Columbia or direct from the winery through cedarcreek.bc.ca.

This stylish syrah is a return release at LCBO Vintages outlets this month. Creekside has long been a champion of the variety, coaxing impressive ripe fruit as well as peppery and savoury notes into the glass. This is a great example that’s ready to drink. Available at LCBO Vintage outlets or direct through creeksidewine.com. 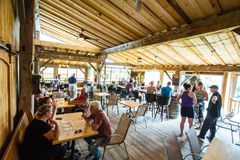