During dinner parties, Marije Vogelzang often has trouble explaining what she does, even though it has a lot to do with the act of eating together. “People think that I make pretty food or that I make cookbooks,” she says. In fact, Vogelzang is an eating designer, an emerging vocation that combines conceptual spaces and meals to spark moments that make us reconsider everything from food sustainability to social rituals.

As unconventional as it sounds, eating design is a growing field and Vogelzang is considered to be a pioneer of the discipline. The experiences she creates are sometimes unusual and often awkward, as was the case with her Seeds installation, developed in collaboration with Caesarstone for the Interior Design Show in Toronto last January.

In the installation (which will be remounted later this September at IDS Vancouver), visitors were offered a sticky ball of fruits and seeds by a disembodied hand sticking through a hole in a stone panel. Before eating the mystery concoction, they were given a headset and asked to choose between two types of seeds, rice or barley, which would determine their experience as they walked through a series of vignettes staged in a sea of suspended satin ribbons. The journey, “narrated” by the seed itself, felt poetic as it followed the path from grain to food. In one vignette, you were invited to catch a drop of water, in another to grind seeds for flour before receiving a piece of flatbread.

“As a designer, you have to choose a material. And when you use food and use it in a positive way, you can actually have an effect on the world,” says the Dutch designer. “Food can be the fantastic, perfect agent for human interaction or for creating rituals or creating a deeper understanding of other things.”

Vogelzang’s experiences often leave audience members in a contemplative state. Her work can also be political. A three-day performance called Eat Love Budapest featured 10 Roma women who anonymously shared their histories while feeding strangers food with personal meanings. In a collaboration with the Museum Rotterdam, Vogelzang recreated Second World War recipes, complete with ration cards, and fed them to survivors who hadn’t eaten them in seven decades.

But it’s the psychology of eating that has fascinated Vogelzang since she was a child. She would make simple hors d’oeuvres for her parents’ friends, purposely all different. “I would really observe who would pick what. I think it’s not necessarily the food itself that was my trigger but more what you can do with food,” says Vogelzang.

While studying product design at the Design Academy in Eindhoven, she began experimenting with food as a design material. “At that time, this whole notion of conceptual design started to rise and that meant that as a designer you didn't necessarily have to make products. I was actually really not good at making stuff,” she says. “Once I started doing stuff with food, I got so excited because suddenly you have this material that is not only tangible but you can smell it, you can taste it – it actually becomes a part of your body. After a while, I understood that whenever you work with food, you are actually working with something that connects the whole world.”

After graduating in 2000, Vogelzang worked for famed industrial designer Hella Jongerius, but food was always in the back of her mind. In 2004, she launched Proef (meaning “test” in Dutch), a design studio and restaurant in Rotterdam. “I was using the guests as guinea pigs for new ideas. Sometimes that was really nice and sometimes it was really horrible.” A year later, she converted Proef into a regular café and opened a second location in Amsterdam, where she also moved her studio.

The restaurant concept – the food, the interior, even the server uniforms – changed every six weeks. One iteration was centred around apples, another time they only served food that grew in the dark. “At that time, the whole notion of a pop-up restaurant just didn’t exist yet. People had no idea what they were coming to,” she says. “Sometimes they were really disappointed because they had a nice experience a few weeks before and they wanted to bring their friends to have the same experience again and then it all changed.”

The Amsterdam restaurant thrived for six years until Vogelzang sold it so she could focus on her design work. In 2014, she became head of the new Food Non Food Department at the Design Academy Eindhoven, her alma mater.

According to Dr. Francesca Zampollo, the founder of the International Food Design Society and the founding editor of the International Journal of Food Design, food projects stand out in the world of conceptual design because they capture our imagination, often through social media. “Eating design thrives to be at the forefront of intuition, wonder, exploration,” she says. “It shows us how we could consume food, or new, informative, inspiring ways to think about food itself.” As restaurant spaces morph into more immersive environments and the food industry explores how to use sustainable approaches to push itself creatively, it’s possible that eating designers such as Vogelzang will eventually be as important to an establishment’s success as an accomplished chef.

Vogelzang works on five or six large-scale projects a year, and many of her experiences involve participants feeding each other. “It’s a very sensitive power balance,” she says. “I was just really excited trying to understand the psychology and then trying to find a way to have strangers feed each other without it being uncomfortable. After a while, I found out that the way to do it is to make sure there is no eye contact.” Her designs often include a barrier between the feeder and the receiver, sometimes with just a hole cut out for the mouth or the hand.

Despite having no eye contact, she recognizes that an immediate bond is formed between strangers. “People are so sweet to each other. Because sometimes you see strangers just cleaning the other person’s mouth with a napkin, even though they don’t know each other,” she says. “It makes me so happy to see.”

Five Canadians who are stirring things up in Scotland, the spiritual home of the drinks industry Subscriber content
September 11, 2019 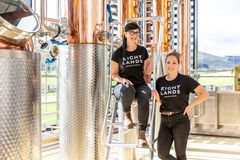 How do I make crispy-skinned fish? Subscriber content
September 11, 2019 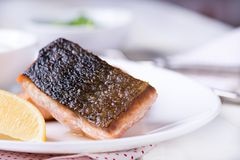 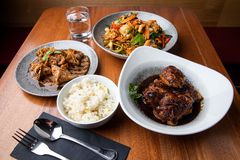