Some years ago, as friends and I found ourselves in an untouristed bit of Notre Dame Bay, on Newfoundland’s northeast coast, we were confronted with an ancient question: Could we find a half-decent restaurant?

For travellers venturing to the bays and remote outposts of Newfoundland, stunning scenery is guaranteed, but eating out can be a roll of the dice. Choose well and you land on a veggie curry sandwich at the Two Whales in Port Rexton. Choose poorly, as we did, and you could end up at a grease-soaked pizza and fish-and-chips joint, whose floor is made of Astroturf, with a wait for food so long there’s ample time to question your life choices, this meal included.

In many rural parts of the island if you want a thoughtful, nourishing meal, your best option, by far, is to secure an invite into someone’s kitchen. Why the incredible – and famous – hospitality of the Newfoundland home, with its fresh brioche rolls, cod, wild berry jams and jellies, rarely extends into the restaurant industry is frustrating and perplexing.

At last, however, that puzzle appears to be sorting itself out, as restaurants and cafés all over the island are sourcing local fish and vegetables, and doing enough business to stick around. There’s the vegetarian Two Whales in Port Rexton, the Boreal Diner in Bonavista, Galliott Studios and the Black Spruce nestled inside Gros Morne National Park, to name a few.

Behind this change is a cast of adventurous back-to-the-landers who, having travelled the world, have come to rural Newfoundland to fix a culinary hole. Most of them are using the path blazed by Raymonds, one of Canada’s most successful fine-dining restaurants, to put Atlantic terroir on more plates. Some have come home; some moved because the city was unaffordable, but the dream of living and working a stone’s throw from the ocean was still, somehow, within reach, if they were willing to cut a trail of their own.

Newfoundland’s food situation can make for a rather dark read. Food First NL, an advocacy group, estimates that, when the ferries stop running, the island has a two- to three- day supply of produce on hand. That’s along with the highest rate of diabetes and the lowest number of farms in Canada.

Even near St. John’s, where sea-to-table eating is now some of the best in Canada, reliably good food can be hard to find outside the city limits. Recently a contender appeared.

The Grounds is a light-filled café at the end of steely Windsor Lake, a 20-minute drive from St. John’s. It’s located, improbably, inside a wing of Murray’s Garden Centre, in a space that once held chemicals and garden tools. Now, in a concept you might call table-to-nursery, the Murrays’ two sons have turned the dead space into a verdant casual restaurant sourced with organic vegetables grown just a two-minute walk from the kitchen, on 65 acres of forested hills in Portugal Cove.

And it appears to be thriving. The Grounds kitchen, run by Nick van Mele, makes its own pickles, kimchi, sauerkraut, sourdough bread, jams and jellies. Sous chef Justine Thompson’s pastries (giant savoury and berry scones, multilayered lavender cakes) are impeccable. The pastry case looks like it belongs in Quebec or Paris. In early January I ate a spectacular carrot salad, juicy fried chicken sandwiches on fluffy biscuits with a salsa verde and finished with a killer house-made cinnamon bun.

The Murray’s farming history on this spot dates back six generations. After 35 years of overseeing the business, patriarch Michael Murray was ready to hear a succession plan. “This was a recurring topic after Sunday dinner,” says Cameron Murray, who manages the café. His brother, Evan, who runs the farm and nursery, says their father’s message was simple. “You can either do this, or you can’t.”

Now two seasons in, foot traffic from the Grounds is boosting the nursery and landscape business. Summer mornings see the restaurant at capacity 30 minutes after opening. “We had to completely demolish a shrubbery garden to build a new parking lot,” Cameron says.

Innovation and resourcefulness are recurring themes with these new restaurateurs.

Sylvie Mitford is the operator, co-owner, head chef and occasional dishwasher at the Boreal Diner, a full-service restaurant in a historic home in Bonavista. If most rural restaurateurs have a rural background, Mitford’s is something else. She grew up homesteading, a hundred miles away from Mayo, Yukon (pop. 200).

After five years managing a coffee shop kitchen in St. John’s, she got an irresistible offer to relocate to Bonavista, from a group who restore historic homes and fill them with new businesses. She and her husband leapt at the chance. “The city’s not for me,” Mitford says.

Boreal, a casual, fine-dining spot in a handsome, two-storey building from 1872, caters to fresh vegetable-deprived tourists, “World travellers who expect a certain quality,” she explains. She’s had to spearhead new ways of sourcing ingredients. Most fish in Newfoundland is frozen and destined for export, but a new law, passed in 2015, allowed fishers to, once again, sell directly to restaurants, meaning Mitford can work with local fisher Jerry Hussey (who also supplies to Raymonds), to serve scallops, mussels and fresh cod of “insane” quality, right off the boat. Now that friends have started to raise pigs and lamb, Mitford’s planning to source only local meat.

Mitford is among those building a Newfoundland terroir from the ground up. She forages for dandelions and herbs such as sweet gale, a shrub that grows in bogs. She takes juniper berries, grinds them with sea salt to make juniper butter, which they serve with house bread. Friends save herbs such as sweet cicely for her. Berry pickers "just come into the restaurant” selling buckets of wild partridgeberries, blueberries and gooseberries, Mitford says. “I just take as many as I can until the freezer’s full.”

In the early season before the crops come in, she serves wild dried mushrooms and last season’s wild-caught fish. And her surprise off-season hit has been Chinese pop-up dinners, where she sells between 50 and 100 plates in the dead of winter.

Courtney Howell’s Grates Cove restaurant is located in the tiny community of Grates Cove (pop. 127), two hours from St. John’s, near the tip-top of Conception Bay North. It’s secluded even by Newfoundland standards, seven kilometres off the main road. “You don’t just stumble upon it,” Howell says. But when you arrive, “the ocean just opens up.”

Howell grew up in Louisiana. Her husband, Terrence, has family roots in Grates Cove, so naturally their restaurant specializes in Cajun and Creole dishes, by way of Conception Bay. There’s gumbo, lobster boulettes and a vegetarian Korean pancake for good measure. Terrence makes sushi with dried local capelin and foraged seaweed.

But to balance out the ebb and flow of the restaurant’s business, the Howells operate Grates Cove Studios as something closer to a rustic resort, including a bed and breakfast, a DIY vacation rental on-site and they offer cooking and classes and art workshops.

The restaurant business will never be a secure profession, especially in isolated pockets of Newfoundland. Maybe a three-minute drive away from the Grounds, The Angry Urchin was a one such cautionary tale. It was a small-plates concept focused on local produce, in a former fish and chips restaurant with a stunning view of Bell Island and the North Atlantic. After a local paper touted it as St. John’s possible “Greatest New Restaurant,” the Urchin opened and then quickly closed. It has now reverted to its original owners and name, Wild Horses, and returned its focus to fish and chips, beer and live music.

Paul Littlejohn runs Wild Horses with his aunt. He suspects the Angry Urchin was too expensive and formal for its main audience: passengers waiting hours for the Bell Island ferry crossing. “Every day someone comes in and says, ‘I’m so glad you’re back open,’” Littlejohn says.

This is an outcome the new crop of rural restaurants are eager to avoid. Some benefit from low rent, others have live music and art classes. Still, with a short tourist season, most close for months in the winter – even Raymonds is open just three nights a week. More and more, though, it seems their sweat is paying off.

I’m still thinking about the carrot salad at the Grounds. It emerged with carrots two ways; roasted and shaved, with parsley, shaved radish, pumpkin seeds, dried cranberries tossed in a gentle orange vinaigrette. Evan Murray later explained the carrots were the only vegetable they could still grab from under the snow. It was unnecessary modesty. Proof, perhaps, that even the people running these rural restaurants don’t yet realize how good they are. 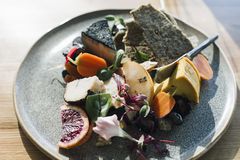 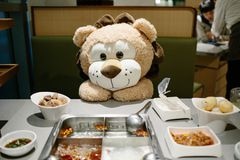