Let’s be honest: pouring a cold glass of wine or beer, popping a can of fruity vodka soda or mixing a martini may have helped all of us get through the past year. In a recent Statistics Canada survey, almost a quarter of Canadians reported drinking more during the pandemic; at the same time, many people are reconsidering the effects of increased drinking. The result is a boom in wellness remedies, including hydration and hangover prevention and treatment products, which are expected to be a US$3-billion industry globally by 2025.

As a booze-industry professional, I dosed some hard-drinking colleagues and friends with some of the new, Canadian and buzz-worthy remedies. The nature of most of these supplements means they don’t require medical regulation or approval, plus most of their creators aren’t health professionals – and neither am I, so please always consult with your doctor before taking anything new.

The products making the biggest splash right now are promoted like they come from tech start-ups, boasting “science-based” ingredients supporting liver function and the breakdown of alcohol, such as taurine n-acetyl cysteine (NAC) and dihydromyricetin (DHM).

Dose: Two capsules before drinking and an optional two more before bed “if it was a big night,” Kumar says.

Rating: Pop some bottles! Our testers reported having a better sleep and waking up headache-free and more refreshed than usual after a boozy night.

This American brand, which offers a “satisfaction-guaranteed” money-back claim, conducted its own study in which 86 per cent of participants reported “a significant reduction in their hangover symptoms,” founder Eddie Huai says.

Dose: Three capsules before drinking and three before bed.

Rating: Cocktails after dinner? A couple of testers woke up hangover free, but others claimed this product, which has many of the same ingredients as No Days Wasted, didn’t work for them at all, when No Days Wasted did.

This liquid remedy, which comes in colourful 100-mL bottles, says its array of vitamins and herbal extracts (the hero: hovenia extract) is approved by Health Canada to support healthy liver function.

Dose: One bottle before, during or after drinking.

Rating: Worth a shot. Lemonade-tasty, this shot did the trick for most testers, who liked that you don’t have to remember to take it before drinking.

These remedies boast a natural approach, containing (mostly) ingredients with names you can recognize on their nutrition labels. Bonus: They’re both Canadian brands.

Dose: Three capsules before drinking and three before bed.

Rating: Raise a toast. Though a couple of testers still woke up headachy, others reported feeling fresh as daisies.

This American remedy is the only one tested that’s recognized by the U.S. Food and Drug Administration – because it contains good old Aspirin (better for hangovers than acetaminophen, the brand says) plus caffeine. One fizzy tablet taken in water the morning after supposedly works in just 15 stomach-friendly minutes

Rating: Happy hour. While not noticeably more effective than the traditional coffee-and-Aspirin cure, it’s pleasantly lemon flavoured and goes down easy in the morning.

This product’s American inventor, Jennifer Corcoran, discovered that her “hangovers” were actually sulfite (a wine preservative) and tannin (from barrel-aging wines) sensitivity. Swirl these drops into wine and the food-grade hydrogen peroxide (similar to teeth whiteners), powdered egg whites and sunflower lecithin neutralize the offending substances into harmless sediment.

Rating: Crush a bottle. Testers with sensitivity to highly sulfited white wines and tannin-rich reds found that the drops reduced or eliminated their typical flushed faces and inflammation.

These 10 wines and spirits are ideal for enjoying with warmer spring days
Subscriber content
March 24, 2021 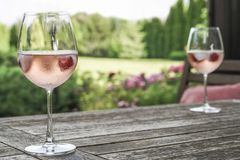