Culinary scholars think that the word “curry” comes from the Tamil word “kari,” meaning spiced soup, sauce or gravy. Colloquially, people refer to a combination of certain spices as curry, but it is not used to name a dish. At the time of the Raj in India, returning British expats brought curry spices back with them and the Brits made curry their favourite take out. Chicken tikka masala is even regarded as Britain’s national dish. Curry dishes are made all over Southeast Asia and the Caribbean. The base need not be lavished with chilies, but rather it is the spices used and their balance that give these dishes their distinctive flavour.

Here are the different styles.

In India, spicy dishes are never made with curry powder or curry paste. Combinations of spices are ground for each specific meal. Curry powder as we know it in Western culture was invented when the British returned home and were looking for that spicy taste. Premade curry pastes and powders, with different levels of heat and for different uses, are available in stores. These are a reasonable substitute, but your dish will be better if you toast and grind your own spices. You can also find excellent, shelf-stable kits (such as the Spice Tailor by British chef Anjum Anand) where you simply add the protein or the vegetable.

Thai curry paste is fragrant with sweetness and heat, giving recipes flavour and balance. The differing colours depend on the chilies used. Green curry paste is the spiciest and has a lively flavour. Red, my favourite, is less spicy but bold and with depth. Yellow has lots of turmeric and is reminiscent of Indian dishes. To make the best Thai curry, you should grind your own spice paste in a mortar and pestle, but it is a long, complicated process. I tend to buy curry pastes for everyday eating but will grind my own for special occasions. Be careful when buying as some are very salty. Mae Jum, available on Amazon.co.uk, is worth trying. Coconut milk is added to Thai curries; use a full fat one for the best taste.

The Japanese first tasted curry when British sailors arrived in Japan in the 19th century; many had been in India and brought spices with them. However, the Japanese form is richer, sweeter and thicker than the Indian and it uses lots of turmeric for its distinctive yellow look. Traditionally it is made into a thick sauce and served with Japanese short grain rice and chicken.

Malaysian curry is very hot. It features coconut, both shredded coconut and coconut milk, along with lemongrass, galangal, ginger and kaffir lime leaves, as well as Indian spices. It can be either wet or dry. A spice paste (rempah) is the basic building block, usually containing candlenuts, which I replace with more easily available Brazil nuts.

While Caribbean curry can be spiced up with hot sauce, it is not too spicy on its own. It uses a combination of sweeter spices such as cinnamon, star-anise and lots of turmeric to give it a distinctive flavour. It is often combined with goat, beef or fish.

How do I make crepes at home? Subscriber content
February 19, 2020 How do you cook sous vide? Subscriber content
February 12, 2020 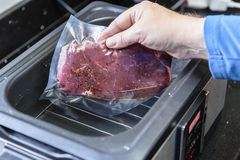