Last week, two major summer culinary events held big, buzzy media launches. One was the Big Feastival Canada, an Ontario satellite of a British festival thrown by Jamie Oliver, happening in August. The other was Edible Canada's Across the Top of Canada, a seven-day, seven-stop June food tour with meals prepared by Canadian celebrity chefs.

Both promised fun and adventure – and at first blush, neither included a female chef. It seems feminist sentiment has failed to make it through the swinging kitchen doors of your favourite restaurant.

The gender imbalance at the Big Feastival wasn't for lack of trying, events director Judy Merry says. She says that when she and Food Network chef Chuck Hughes drew up their wish list, it was 35-per-cent to 40-per-cent female.

Merry says she followed up with chefs and their agents and restaurant managers multiple times, thinking, "I hope one of these females gets back to me." But by the March 24 media launch, not a single woman had been confirmed.

"They'd be checking their schedule, or I wouldn't hear from them," she said. "So I don't have a reason why I couldn't lock down those names." In response to public scrutiny, the Big Feastival added four women to their roster by April 1. Only one identifies as a chef; the others are food writers and cookbook authors.

Eric Pateman, the president and founder of Edible Canada, was unavailable for comment about Across the Top of Canada. Since the launch, Michele Genest has been added to the lineup: She's listed as a chef, but calls herself a "cookbook author specializing in northern foods."

She's also been part of planning the event, specifically the Yukon stop, for the past 14 months. "I probably should have paid more attention," Genest says, adding that she had no part in inviting chefs. "I only saw the full lineup recently because I've been focused on other projects."

Another Across the Top participant is Ned Bell, executive chef for Ocean Wise in Vancouver. "It's unfortunate – we should have had better diversity on the trip," says Bell, who lives in Vancouver. "All I know is that we're working with some incredible diversity when we're in the market, I know there's some incredible female chefs on the ground that are hosting us."

Those aren't the only male-heavy culinary events planned for the summer. Canada's Table, a dinner being held in Ottawa in August, has one woman on a marquee of 17 chefs. Taste of Toronto, in June, comes the closest to gender parity: Three out of 11 chefs are female.

It's disappointing that organizers for all of these intensely planned programs failed to register not only the absence of female chefs but the problematic first impression of promoting an all-male lineup. This comes at a time when sexism and exclusion in restaurants and kitchens is the subject of constant media attenton.

Some women in the industry say the problem is "bro culture": that the restaurant industry suffers from a chummy, buddy-promoting, hypermasculine mentality. It's a term not many men want to be associated with.

"I'm not comfortable with the term 'bro culture' because I just think that it's such a damaging comment even though it is partially true to form," Bell said.

Ottawa restaurateur Stephen Beckta, one of the organizers of Canada's Table, shares that sentiment. "This isn't an all-male line and there's certainly no bro culture," he says. "The bulk of the people who are working on this event are women."

The suggestion that women are overrepresented at the mostly invisible level of event organization has the unfortunate effect of reinforcing the sting. No matter the spin, the fact remains that female chefs are still missing from the marquee. And the reasons given for why that might be are pretty uninspired. I asked Beckta if he thought a concerted effort to promote female chefs at such culinary events would help.

"I believe in gender equality, especially in the kitchen," he replied. "I don't know how I feel personally about wanting to put women in just for the sake of having women at this event." This suggests female chefs don't have the talent to earn them a place. Barring the way by not actively promoting gender balance only maintains the status quo.

Perhaps the accusation of being a "bro" hurts, but no more than the insult female chefs face of being left out, denied the media spotlight and financial returns that such high-profile culinary events promise.

The whole thing plays out like a culinary koan. Women aren't on the marquee because they don't have the kind of profile that drives ticket sales, but they can't raise their profile without access to the marquee.

Deborah Reid is a Toronto writer and chef. 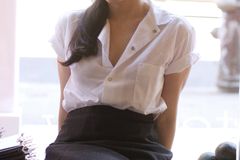 Kitchen fires: The open debate Canadian chefs are finally having about sexism and harassment
June 19, 2015
Follow us on Twitter @globeandmail Opens in a new window
Report an error Editorial code of conduct
Due to technical reasons, we have temporarily removed commenting from our articles. We hope to have this fixed soon. Thank you for your patience. If you are looking to give feedback on our new site, please send it along to feedback@globeandmail.com. If you want to write a letter to the editor, please forward to letters@globeandmail.com.
Comments