Plenty has been said about insects as an alternative source of protein with environmental benefits. And for good reason. The Food and Agriculture Organization of the United Nations predicts that by 2050 the world population will be 9.1 billion, which they say will require us to increase food production by 70 per cent. And as early as 2013, the FAO started promoting insects as an "unexplored nutrition source that can help address global food insecurity."

So naturally, entrepreneurs have begun lining up to sell insects to Canadians as an environmentally friendly cure-all, from Coast Cricket Protein (whose website claims, "Crickets leave a much lower impact on the planet than other protein sources") in British Columbia, Crickstart ("supersustainable") and Entomo Farms ("the planet's most sustainable super-food") in Ontario, to Midgard Insect Farm ("the next big thing in pet food") in Nova Scotia.

Yet, food security and business strategists say the hype butts up against real concerns over sustainable food sources – that we might just be trading one destructive food system for another.

Joshua Evans, a Canadian PhD candidate at Oxford University and co-author of On Eating Insects (Phaidon, 2017), argues that the "solution narrative" – the marketing of insects as a panacea for health, resource and climate challenges – is misleading.

"We have gotten into a bad habit of talking about specific organisms as 'sustainable' or 'unsustainable,' " Evans says, "But sustainability is not a property of organisms. It is a property of systems. If we think insects will suddenly change the catastrophic effects of monoculture and mass production, we will be sorely disappointed."

Based on his research, he believes that once production of edible insects is scaled up, the impact of feed, energy, processing and transportation will make bugs no more sustainable than conventional protein sources.

Evans argues that we placed the same expectations on soy in the mid-20th century, only to see that crop turned into a patentable product, "causing massive deforestation of the Amazon to plant vast monocultures whose yield is then shipped elsewhere so that we can continue to produce very cheap beef. Swap out soy for insects, and you have a version of the story that currently unfolds."

While studying the ecological, economical and cultural aspect of eating insects, the pair is keen on the taste factor. But part way through the project, they grow wary that their research is merely setting up international food conglomerates to swoop in, monetize and dominate the market.

There are some signals that global food corporations are eyeing that possibility. At a food conference in 2016, General Mills technology director Erika Smith expressed the company's openness to the idea of insects. A trend report from food and agriculture conglomerate Cargill predicts the market for "third-generation alternative proteins" (which includes insects) will grow in the coming years. And last year, PepsiCo (which makes Doritos, Quaker Oats and Cheetos) posted a request for proposal, seeking new protein sources for use in snacks and beverages. The RFP says they are open to insect protein, and that they've already experimented with cricket and mealworm powder.

But even if they find some bugs that taste good in Fritos, cost and logistics of mass production pose a barrier. Smith, the General Mills technology director, says more research needs to be done on food safety, and the cost needs to come down.

"The problem is that they have to make a pretty big upfront investment to make insects cheap enough to be really competitive with grain flour," says Paul Rozin, a professor of psychology at the University of Pennsylvania whose research focuses on our attitudes toward food.

"It's a risk. They have to invest in large-scale production of insects and they have to breed insects to make them better-tasting and more efficient to produce."

"Right now we're a premium product," says Dan Novak, founder of Crickstart, whose crickets are grown and harvested by Entomo Farms in Norwood, Ont., and processed in Montreal. The organic crickets are fed oats, flax, alfalfa sprouts, soy, corn and peas. But Novak says the major cost factor for the company's lemon lime, chili chocolate and cinnamon cardamom bars, which retail for $3.50, is labour and lack of scale. "Other agricultural industries are heavily automated and apply massive economies of scale. We're still far from that, but as people purchase these products, production volumes increase and new entrants come into the industry, prices will be driven down over the coming years."

Novak likens crickets to the Tesla electric car, believing that the price will come down as production scales up. "Any movement like this requires early adopters, passionate about the long-term potential, to kickstart the industry."

However, two recent studies have come to the opposite conclusion. According to "Crickets Are Not a Free Lunch: Protein Capture from Scalable Organic Side-Streams via High-Density Populations of Acheta domesticus" (Plos One, 2015), as cricket production is scaled up, the feed conversion ratio (amount of food to reach harvestable size) gets higher and therefore less efficient. The paper finds that crickets could only supplement global protein supply if we develop feed that is better and cheaper than what we use for livestock. "Entomophagy and Power" (Journal of Insects as Food and Feed, 2016) additionally argues that unlike meat, which is often sold raw, insects require processing to be made palatable for a mass audience (grinding, dehydrating, freeze-drying), all of which use significant energy.

They also require pairing with other ingredients. The Crickstart bars are more hemp, pumpkin-seed butter and sunflower-seed butter than they are cricket.

But edible-insect entrepreneurs have at least one clear advantage over traditional livestock farmers. Even with a million crickets raised in a shoebox, not even PETA is likely to shed a tear for the conditions in which insects are kept.

Most of us don't have empathy for them. But for that same reason, this potential food source is viewed as creeping, crawling, hard-shelled, tiny aliens. So it's hard to entice consumers to pop an insect into their mouths. In North America, our puritanical brains have been programmed to rebel at the thought, but insects are eaten all over the world. ("We're not so sure that scorpions and seaweed will replace steak and a salad any time soon," reads a blog post about the future of food on Nestlé's website. "Although we're happy to be proved wrong!")

Rozin, who has no doubt that people will come to accept entomophagy if it's sold hard enough, says that the disgust many people feel toward insects is entirely psychological and not based on actual taste.

Even if hurdles such as cost and ick-factor can be overcome, the bottom line, some experts say, is that the problem with insects as a solution for world hunger is – that they're not. People go hungry because of poverty, not a lack of supply.

"As long as there are income differences there will be consumption differences when it comes to food," Alderman says. "Income assistance is a more direct and immediate means for preventing undernutrition than increasing production."

Would you eat snacks made with crickets? Canadian insect farmer hopes so
April 27, 2016
Fish and chirps? Crickets make leap in demand as a protein
January 13, 2017 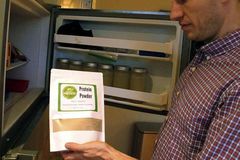 Georgia theme park offers free tickets for eating crickets
December 16, 2017
Follow us on Twitter @globeandmail Opens in a new window
Report an error Editorial code of conduct
Due to technical reasons, we have temporarily removed commenting from our articles. We hope to have this fixed soon. Thank you for your patience. If you are looking to give feedback on our new site, please send it along to feedback@globeandmail.com. If you want to write a letter to the editor, please forward to letters@globeandmail.com.
Comments are closed