After savouring a giant gumball, her son Benjamin snapped the spacer on his braces with a Sour Patch Kid. Next, it was Ms. Belanger's turn: Having weakened her teeth on chocolate bars over Halloween, the Calgary mother of four cracked a tooth on a nut in an apple crisp – a root canal and crown would follow.

This year, Ms. Belanger is trying to play it safe. On top of setting a rigorous tooth-brushing regimen for her kids, her daughter Katelin, age 9, will trick-or-treat but chuck everything save for her potato chips in an effort to spare the delicate expander she was outfitted with last week ahead of braces. As for the three boys, – Zachary, 17; Joshua, 13; Benjamin, 11 – Ms. Belanger has set a candy-gobbling deadline.

"I let them have full reign on it for about two days. And then I take it all away."

Sticky taffy and gummies, acidic sours and rock-hard gumballs paraded home in pillow cases, as well as candy apples bitten into at Halloween parties, seem to be the worst culprits.

"We notice an increase of 70 per cent in the number of visits in the three weeks following Halloween. They're mostly kids," said Vancouver orthodontist Sam Daher.

"It's always jaw breakers, taffy and candy apples," said Dr. Daher, who also deemed the retro pastime of bobbing for apples a "no-no."

Other offenders include Tootsie Roll and Gummi bears: When these sticky bits get lodged between brackets and gums, the spooky dental scaler comes out.

As the pagan holiday is increasingly espoused by grown-ups, orthodontists and dentists are dealing with new behaviours around emergency visits post-Oct. 31.

"It sounds silly, but adults try to hide it sometimes while the kids are pretty straightforward: They just tell us what they had," said Dr. Daher.

To avoid a mouthful of November cavities, parents will often schedule cleaning appointments and check-ups several weeks after Halloween.

Still, some dentists are trying to rid people of the angst ahead of time.

In Calgary, the Evans Centre for Dental Health and Wellness has offered locals a candy buy-back program for four years; it happens tomorrow.

"It's like the Halloween after-party," said Aaron Russell, director of marketing at the Evans Centre, which sees a spike in pulled-out fillings as well as "expedited decay" directly after Halloween.

The buy-back gives "parents some options for striking deals with their kids," who make a dollar per pound of candy and score flashing LED toothbrushes. To the chagrin of some with a sweet tooth in the community, the candy is thrown out, but not before it's weighed and the equivalent poundage donated in apples to the Calgary Food Bank.

"We don't think people shouldn't have a couple of treats on Halloween," said Mr. Russell, "but it's the nursing of the two-week feed sack that we think is often times what's happening."

In the United States, a candy buy-back program called Operation Gratitude has been sending troops Halloween treats purchased back from American families since 2007. Last year, soldiers got 250,000 pounds of candy, some of which they doled out to Iraqi children in exchange for intel on IEDs. This year, some 1,500 dentists have signed up.

The Canadian Dental Association suggests rationing out your candy "over a few weeks" or having your kids trade the bulk of it in for a toy or a trip to the movies.

Aside from dentists, parents are coming up with their own inventive ways to curb the annual gorging.

Vancouver mother Jill Amery makes her boys, Hudson, 3, and Ford, 5, ask the "Halloween fairy" for permission every time they crave something from their stash, this because Ford ended up with excess plaque buildup after Halloweens past.

"This ensures that we can brush their teeth right afterward and also teaches moderation and gives them a sense of control," explained Ms. Amery, publisher of UrbanMommies.com.

"After about three days, the 'Halloween fairy' pays a visit and exchanges all of the candy for a desired toy," said Ms. Amery. "Now mommy and daddy have to have the willpower."

Managing self-discipline around the new Halloween rules is another story for parents, it seems.

"I used to take the candy away from the kids," said Michelle Kelsey, a Vancouver mother of two daughters. "They would be allowed to keep two to four pieces of candy, and then I'd get rid of the rest."

Get rid of where?

"I'm slightly embarrassed to say that it went into an adult cupboard and the parents ate it over I don't how long," confessed Ms. Kelsey. "Their father used to eat a lot of it."

A bonbon ban is also in place at the Toronto home of Sonya Davidson, a recovered Jelly Bean addict who doesn't eat the candy she forbids her kids, which includes Laffy Taffy, Tootsie Roll, Starburst and Skittles.

Ms. Davidson, who writes for UrbanMoms.ca, gets her sons Jacob, 11, and Tyler, 7, to dump their bags by the door when they get in from trick-or-treating: "They go to sleep and I take all that stuff and I toss it."

She does let her sons keep chocolate, chips and bounty scored abroad: "If they get it at school, I'm not going to be a vigilante about it."

At Dr. Daher's house, the motto is moderation, this after the father of three and his wife tried handing out just toothbrushes and floss, only to find their Halloween traffic dip by 80 per cent the following year.

Said the orthodontist: "You ask them not to eat candy and they're just going to resent you forever."

Devilish desserts for a delicious (and grown-up) Halloween
October 29, 2011 Will homemade Halloween treats make me a pariah? So be it
October 27, 2011 What to be this Halloween? A costume consultant can tell you
October 28, 2011 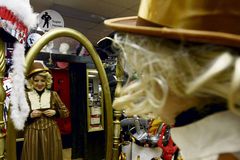 Coming to your door on Halloween: The reverse trick-or-treat
October 27, 2011 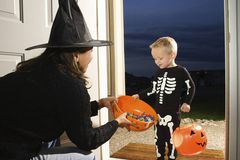