I plan to spend this weekend elbows deep in dark brown sugar, molasses, unsalted butter, vanilla and sweetened condensed milk, which I'll cook down into liquid caramel and use as a dip for the best local apples I can find. I plan to make individual little baggies of candy corn, too. And then I'm going to hand my homemade candies to trick-or-treaters who come calling at the door.

I think it's nice, but I'm not entirely clueless. The other day I asked one of the mothers at my kid's kindergarten what she'd do if the neighbours gave her girls homemade treats.

"I'd throw them out, I think," she answered, then paused. "How well do I know them?"

"You sort of know them," I told her. "You know who they are, but you're not close or anything."

She thought for a minute. "I remember getting homemade candies when I was a kid." She seemed to brighten for a second, and then her smile hardened. "I'd throw them out, wouldn't you?"

I asked her why.

"Because there are no controls," she told me."You know, like factory controls."

When I informed another friend of my plans, he couldn't talk for a good 20 seconds because he was laughing so hard. "Your house is so going to get egged, dude," he said. "Hell, this is a business opportunity. I'm going to stand outside with a case of 12 dozen, and sell them to all the furious kids."

It wasn't always this way. Following the Second World War, Halloween transformed from an apple- and nut-fuelled evening for prank-playing teenagers to a children's night that revolved around homemade and packaged treats.

Nicholas Rogers, a professor of history at York University and author of Halloween: From Pagan Ritual to Party Night, says that by the early 1970s, commercial, packaged candy had become the norm. Women were increasingly working outside the home and didn't have the time or inclination to make candy.

But there was another, more alarming cause. Beginning in the early 1960s, the first few days of November always brought reports of children who had been injured or even killed after eating candy that had been laced with poison or stuck with razor blades. In 1970, a five-year-old boy from Michigan died after eating heroin that his family claimed was hidden in his Halloween haul; four years later an eight-year-old Houston boy named Timothy Mark O'Bryan died after eating Pixie Stix that had been laced with enough cyanide to kill three grown men.

As if that wasn't bad enough, just a few weeks before Halloween in 1982, seven Illinois residents died after taking Extra-Strength Tylenol that had been poisoned and then put onto store shelves. Tamper-happy psychopaths could kill any of us, the message went.

Hospital radiology departments across the continent offered to X-ray children's candy in search of pins and needles. Police instructed parents to forbid children from eating their loot until they'd hand-inspected every piece. Some parents even unwrapped and then chopped up their kids' candies in search of hazardous objects.

Just 10 years ago, police in Vancouver called in six homicide detectives and warned parents to confiscate their children's candy after four-year-old Stephanie Truong died from heart failure on Halloween night. And nearly every year brings fresh reports of tampered treats, like the news story from last November that announced, "B.C. Boy Finds Pin in Halloween Candy."

There are problems with the Halloween-sadist narrative, though. That kid from Michigan who ate the heroin? He'd found it in his uncle's house and eaten it, investigators soon discovered; it didn't come in his Halloween candy after all. Those cyanide-laced Pixy Stix in Houston were the work of the boy's father; the man, stood to earn $60,000 (U.S.) from a life insurance policy he'd taken out on his children's lives. That little girl from Vancouver died of a bacterial infection that wasn't related to her Halloween loot bag, toxicology reports showed. In fact, several studies show that most Halloween sadism reports – the pins-in-the-candy stories – are baseless, at very best. It's Halloween, a night of make-believe.

Joel Best, a sociology and criminal justice professor at the University of Delaware, has tracked Halloween sadism reports going back to 1958, and he's written two much-cited papers. The upshot: "I have been unable to find a substantiated report of a child being killed or seriously injured by a contaminated treat picked up in the course of trick-or-treating," Prof. Best writes.

Or as I like to think of it, your child is roughly 17,000 times more likely to be killed in a car crash on the way to Costco to buy a 20 kg box of Spongebob Squarepants Sour Gummy Krabby Patties than from swallowing a razor blade or a strychnine caplet on Halloween.

The list of things I'm afraid of finding in my own son's loot bag is somewhat more reality-based. I'm afraid of finding hydrogenated palm kernel oil, and 6-hydroxy-5-[(2-methoxy-5-methyl-4-sulfophenyl)azo]2-naphthalenesulfonic acid, which most candy companies just call Red 40 for simplicity's sake. I'd also like to steer him away from propyl gallate, tartrazine, high-fructose corn syrup and artificial flavours like methyl benzoate as much as possible. They're all standard commercial candy ingredients. We've willingly accepted them as necessary evils, because, you know, at least the confections they arrive in come individually wrapped.

Another argument I've heard against homemade candies: Kids have allergies, and you never know what's come into contact with your neighbour's headless horseman cupcakes. That's why I plan to put a list of ingredients on every candy I hand out on Monday, plus my name and address so parents know exactly where they've come from. And seriously, if your kid is so allergy-prone that he's going to fall deathly ill from eating a caramel apple that was made near a cutting board that might have touched a peanut, this is probably a good night to consider keeping your loved one indoors.

Of all the things I heard when I told people about my plan, the one that stuck the most was something a friend at work said. "You're going to be the pariahs of your street," she warned. "And you're dragging your wife down with you."

So maybe I will. Halloween's always been a night for the absurd. 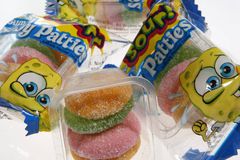 What is the ultimate Halloween candy? Round 4: Ring Pop v. candy necklace
October 26, 2011 Why candy isn't so bad after all
October 23, 2011
Follow Chris Nuttall-Smith on Twitter @cnutsmith
Report an error Editorial code of conduct
Due to technical reasons, we have temporarily removed commenting from our articles. We hope to have this fixed soon. Thank you for your patience. If you are looking to give feedback on our new site, please send it along to feedback@globeandmail.com. If you want to write a letter to the editor, please forward to letters@globeandmail.com.
Comments