It's dinnertime at Tea-n-Bannock, a new aboriginal restaurant on Toronto's Gerrard Street East, and the kitchen staff are busy preparing affordable meals for a steady stream of native diners. They haven't come for wild meat or foraged vegetables. They're here for the deep-fried hot dogs wrapped in dough, fried baloney and Klik – a canned meat similar to Spam.

The most popular dish this evening is the Indian taco. It's a large piece of fried bannock – a bread introduced to native communities by Scottish settlers – covered in ground beef, lettuce, cheddar cheese, tomato, sour cream and store-bought salsa. Are these highly processed foods really considered native cuisine?

Until recently, aboriginal restaurants were practically non-existent in Canada; you could only buy the cuisine at first nations events or at the odd cafe on a reserve. In the past couple years, half a dozen restaurants have opened specializing in native food. Each one faces the challenge of trying to explain the concept to non-aboriginal diners; while just about every Canadian is familiar with Chinese fried rice, tacos and sushi, few have anything but a vague notion of our own indigenous cuisine.

Janine Manning, president of the Aboriginal Students' Association at York University, was excited to take her son to Tea-n-Bannock so he could enjoy the food she had eaten as a child visiting relatives in Neyaashiinigmiing, Ont. "Before, if you were in Toronto and you wanted to eat an Indian taco, or Kwik or baloney and bannock, you'd have to cook it or wait for the next powwow," she explains.

Ms. Manning, an environmental studies student, takes offence to the notion that native people's food is only such precontact items as wild game and berries. "These meals show our resilience in that we could produce a diet from pretty much nothing. People were packed into reserves and they weren't allowed to hunt or fish without permission of the Indian agent, so they had to make do with Indian Affairs rations, like pounds of lard, sugar and flour – essentially the colonizers' diet."

Even though Tea-n-Bannock isn't owned by an aboriginal – it's run by a white pastor at a native church and staffed by native people – Ms. Manning feels this is true aboriginal food because the cooks use their own family recipes.

"We focus on ingredients that traditionally would have made up the landscape of Canada – things like whitefish, bison, foraged berries, foraged greens, pheasant, spruce and mushrooms," says owner Aaron Joseph Bear Robe, a classically trained chef and member of Alberta's Siksika Nation. "These are all things you would have found in this area of the world and would have been used by aboriginal people."

According to food historian Ian Mosby, a postdoctoral research fellow at the University of Guelph, Canadians typically think of aboriginal food as only consisting of precontact ingredients due to ignorance about native people's lives. The idea that aboriginal food has been frozen in time from an era before European settlement also sidesteps some unpleasant historical facts.

"Food has often been used as a weapon against aboriginal people, whether it's starvation on the Prairies in the run up to the signing of the numbered treaties or hunger and malnutrition in residential schools," says Mr. Mosby. "When you look at something like bannock, white settlers feel a lot of guilt, because this is food we see as being imposed on aboriginal people and reflecting this problematic colonial relationship."

Not all aboriginal restaurateurs are happy about the idea of including postcolonial industrial foods on their menus. Inez Cook is the co-owner of Vancouver's Salmon n' Bannock Bistro, a restaurant that serves items like free-range venison and saskatoon berry bannock pudding. She thinks the concept of a white-owned aboriginal restaurant serving industrialized meats is, well, baloney.

"I don't consider it aboriginal food," says Ms. Cook. "Unfortunately baloney is served in first nations communities where they're impoverished. It's a food that can go a long way to feed your family but there's not much nutritional value."

In Westbank, B.C., Kekuli Cafe has managed to bring locally sourced traditional foods and the popular favourites eaten by contemporary native communities together on one menu. The fast-food strip mall joint's slogan is "Don't Panic...We Have Bannock!" and they offer a baloney breakfast and Indian tacos, as well as venison stew and buffalo burgers.

"It's scary to try to portray first nations food because it's pretty much just cooking with whatever you have around you," says co-owner Sharon Bond-Hogg, a former aboriginal youth support worker in schools.

Meanwhile, the many aboriginal people who fill the room at Tea-n-Bannock are voting with their bellies. Indeed, it seems to be the only restaurant of this new crop that primarily serves native diners. "Food culture is what people actually eat – not some idealized vision," says Mr. Mosby. "If aboriginal people go to this restaurant and enjoy it and identify with it, that's the real indicator that it's aboriginal cuisine." 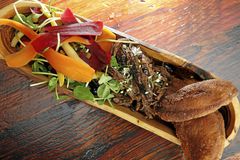 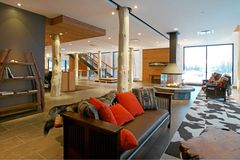 Wowing the world with a classic aboriginal dish
May 3, 2018 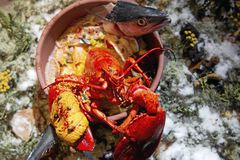