Sauvignon blanc with citrus poached prawns may be a classic pairing, but it has become awfully predictable. If you're in the mood for something more refreshing, may we suggest a light-bodied Belgian-style wheat ale instead?

Such was the sudsy subtext to a recent [March 26]/note> Howe Sound Inn and Brewing Company dinner at Ensemble Tap restaurant in Vancouver, where beer's uncanny ability to complement, cut and accentuate food was served to startling effect.

After centuries of slumming in ye olde ale houses and scuzzy sports bars, beer is finally taking its rightful place at the dining table. And as the growing ranks of cicerones (a.k.a. beer sommeliers) are trying hard to attest, today's craft beer – with its broad range of complex flavours and palate-scrubbing carbonation – may be even more food-friendly than wine.

"Wine has one ingredient," says Chester Carey, Canada's first Certified Cicerone and instructor of an eight-week "Serious Beer" course at Vancouver's Pacific Institute of Culinary Arts. "Winemakers are limited by the harvest and how well the grapes turned out that year."

Beer, on the other hand, is made with a multitude of variable ingredients that can be sourced from all over the world at any time. Mr. Carey points to the wide variety of grains (for bready, toasty flavours), hops (adding floral aromas and bitterness), yeast (peppery and earthy characteristics), spice, fruit and vegetable adjuncts (from clove and coffee to cherry and pumpkin) and even water (soft or hard) available for experimentation. "Diversity is the biggest thing beer has going for it against wine, and it's limited only by a brewer's imagination."

Creative restaurateurs who believe in the magical pairing properties of beer (or are simply jumping on the bandwagon) have begun hiring beer sommeliers to enhance their guests' experiences. At such serious restaurants as Charcut Roast House in Calgary or DBGB in New York, you will find these trained professionals developing beer lists, setting up proper storage and maintenance protocols, training staff and assisting customers in selecting beers that will best complement menu items

As in the wine world, beer sommeliers have various certifying bodies, educational programs and levels of certification. In Canada, the Prud'homme Beer Certification program offers multilevel courses, including a new online version.

Vancouver wine sommelier Sebastien Le Goff says that after taking Mr. Carey's "humbling" class, he is now a convert who believes that beer is indeed more versatile than wine. "The effervescence of beer makes it easier to cut through fatty foods and stand up to spice," he says.

"Wine and cheese is a tough pairing. I've always struggled with it. But beer and cheese is refreshing … and it's really good with spicy foods, which kill the tongue. The fizziness of beer brings it back to life. Champagne is very good for that too, but not everyone can afford a bottle of champagne."

Beer's accessibility, both in price and perception, is one of its primary attractions to Mr. MacKay, last year's Top Chef Canada winner. "For someone like me, who doesn't always appreciate wine's subtleties or retain a vast knowledge about varietals, beer is much more fun. It's so in-your-face."

Mr. MacKay adds that when he is tasting beer, ideas "pop" into his head very quickly. "As soon as I tasted [Howe Sound's Baldwin & Cooper Best Bitter] I knew we could marry it with rum baba. I knew we could match the bitterness of the beer with a little orange pith, nuts and unsweetened Chantilly cream. I wanted to showcase the beer rather than tone it down."

The rivalry between beer and wine is heating up. This year's Gold Medal Plates – arguably the most prestigious cooking contest in Canada – saw more chefs than ever (10 across the country) choose the bold option of pairing their dishes with beer instead of wine. At Montreal's regional round last fall, all three top winners teamed up with local craft brewers, and gold medalist Jean-Philippe St.-Denis from Montreal's Kitchen Galerie Poisson went on to win bronze at the GMP's Canadian Culinary Championship in February.

"The match of the evening" is how national head judge James Chatto described Mr. St.-Denis's vitello tonnato with McAuslan's St-Ambroise Cream. "It's a rich, complex ale with a good balance of malty sweetness and hoppy bitterness, the hops working with food the way acidity in a wine works, brightening up flavours in the food and loosening textures. There were so many swirling elements in the dish and the beer embraced them all – but gently."

Impressive as the pairing was, Mr. Chatto is not convinced that beer trumps wine. "Serious beer-and-food matching has a long way to go to catch up with la sommellerie," he says. "Even the leanest, sharpest beers have a core of grainy sweetness that can prove a clumsy obstacle in food-matching."

Mr. Carey agrees that some big beers can be one-dimensional or overly bold. But he argues that there are plenty of subtle styles – wit beer, classic Bohemian pilsner and English mild, to name but a few – that people aren't aware of. (Fodder perhaps for the upcoming cicerone-versus-sommelier pairing dinner at the Irish Heather on May 23, headlining Vancouver Craft Beer Week.)

Yet the challenge of the beer sommelier – to introduce wine lovers to beer's broad spectrum of styles and infinitely nuanced flavours – can be a tough sell.

Even in Montreal, where craft brewing is a well-established tradition, beer-and-food pairings are still not seen as sophisticated enough to challenge wine's dominancy.

Though proud of his winning Gold Medal Plates combination, Mr. St.-Denis says he hasn't dared try pairing beer at his restaurant. "If a guy comes in and orders a dinner for 100 bucks and you give him a beer, he might think he's being screwed, eh?"

The goal of a great beer-and-food pairing is the same as wine: to complement or contrast the flavours in the beverage to the flavours of the dish, without one overpowering the other, and raise both to greater heights. But beer, unlike wine, can also cut through rich, fatty foods and cleanse the palate.

Match beer and foods that are similar in flavour and intensity. For example, pair light citrus wheat beers with salad, or toasty porters with caramelized roasts. Beer's vast flavour spectrum – from mango to mocha – provides endless experimentation, while a dish's secondary ingredients, cooking methods and spices can all offer synchronizing hooks.

Beer and food with opposite characteristics can balance one another and tease out flavours that shine brighter than when sampled alone. A chocolaty stout may match nicely with black forest cake. But its sweet maltiness melts even more magically in an oyster's salty liquor. In the same way, a light, creamy lager can stamp out the fiery heat of an Indian curry to showcase the delicate perfumes in each.

Beer's carbonation and hoppy bitterness slice through rich, fatty foods and scrub the oils from your tongue, allowing you to actually taste the complementary or contrasting flavours on the plate. Try India pale ales with Stilton, duck or crème brûlée. 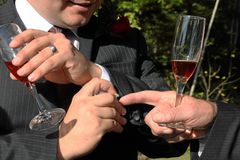 Meet the woman who is breaking Canada's beer standards
March 16, 2012 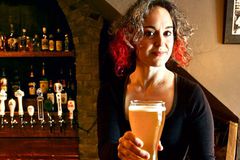