When Grinning Face, a non-dairy gelato shop in Toronto's Cabbagetown neighbourhood, introduced a wildflower-honey and beet flavour to its clientele last year, the response was overwhelmingly good – and bad. "It's our most polarizing flavour," says owner Keo Williamson. "People wanted to try it just to see how a vegetable is incorporated into a dessert. Some were expecting [it] to taste like a salad, but it doesn't."

In fact, the ice cream is smooth and sweet, with a distinct beetiness minus the vegetable's usual earthy twang. It's made of mild golden beets roasted in honey, then swirled with red beets, which add colour contrast and a slightly stronger flavour.

The young Toronto company, which specializes in gelato with a coconut-milk base, is one of a growing crop of ice-cream makers who are harnessing the power of vegetables. From San Francisco to Montreal, pint packers, scoop shops and even restaurants are experimenting with increasingly bold flavours of the vegetal variety. The trend is rooted in contemporary restaurant cuisine, where, more and more, vegetables have gone from being an afterthought to the main event.

"Being open to using vegetables along with herbs and spices is not something I ever had to think too much about," says Jake Godby of Humphry Slocombe, the famously unconventional San Francisco scoop shop. "All of our ice creams and sorbets are sweet even when they contain what are perceived as savoury elements," he says. "We make sorbets from carrots and beets, both of which themselves are very sweet vegetables. We also make a Candy Cap mushroom ice cream, which tastes like maple syrup."

Meanwhile, at New York's veg-forward Dirt Candy restaurant, chef Amanda Cohen comes at it from a different perspective. "I think we're moving away from overly sweet desserts, and one of the nice things about vegetables is that, while they do have their own sweetness, it's not cloying. Also, they open up a huge range of flavours to play with. I love incorporating the bright, fresh vegetal blast you can get from greens, or the dank earthiness you can get from root vegetables."

"There's been a large change in the kind of flavours that are available," says Douglas Goff, professor in the department of food science at the University of Guelph. "Vegetable flavours, spice ice creams, savoury and hot chili flavours are all becoming more common," according to Goff, who has been teaching the school's ice-cream technology course for 28 years. "[The popularity of] fruit flavours such as strawberry and peach have gone way down."

Even mass producers such as Häagen-Dazs have tentatively stepped into the field. Last spring, the company tested an ice-cream line called Spoon Vege in Japan, featuring flavours like Tomato Cherry and Carrot Orange, which were marketed as a healthier alternative with only 8.5 per cent fat. At Bang Bang ice-cream parlour and bakery on Toronto's Ossington strip, meanwhile, scoops are a hedonistic 22 per cent milk fat, and flavours such as avocado and corn on the cob are spooned into an array of decadent vessels. "We do ice-cream sandwiches, primarily made with five types of cookies," says co-owner Rosanne Pezzelli. "We also make a hot Hong Kong-style waffle, and we do profiteroles."

Other purveyors such as Humphry Slocombe stick to sugar cones or cups, or send out their frozen veggie confections to restaurants, where they are plated as desserts. Julien Lebuis of Montreal ice-cream parlour Les Givrés does the same. "Chefs who want to add vegetable ice cream to their menu call us." The co-owner of two retail locations as well as a wholesale operation, Lebuis says Les Givrés makes a corn ice cream in summer, a butternut-squash flavour in late fall and lots of custom options in between. "We did a red-pepper sorbet for the restaurant Smoking Vallée in Montreal. It was amazing – really refreshing. They used it in a frozen cocktail, Le Trou Normand, with a special kind of gin."

Anyone eager to try out the trend at their next dinner party is spoiled for choices. A little homemade corn ice cream takes chocolate cake to a different place – simply fold some freshly roasted kernels into a good-quality pint of vanilla. Likewise, a peeled, seeded and chopped tomato adds excitement to a scoop of strawberry. But easiest and perhaps most enticing of all is following Les Givrés' lead: Use red pepper or carrot juice in your favourite sorbet recipe in place of fruit, then freeze and serve with vodka or gin. Cone shmone. Cold-brew coffee catching on as soda continues to fizzle out
May 15, 2018 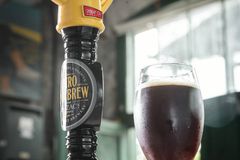