As ‘it’ ingredients go, kale has hogged the spotlight for too long. Sarah Elton makes the case for the humble cabbage: It connects us to our past, speaks to our food future and holds poetry in every leaf 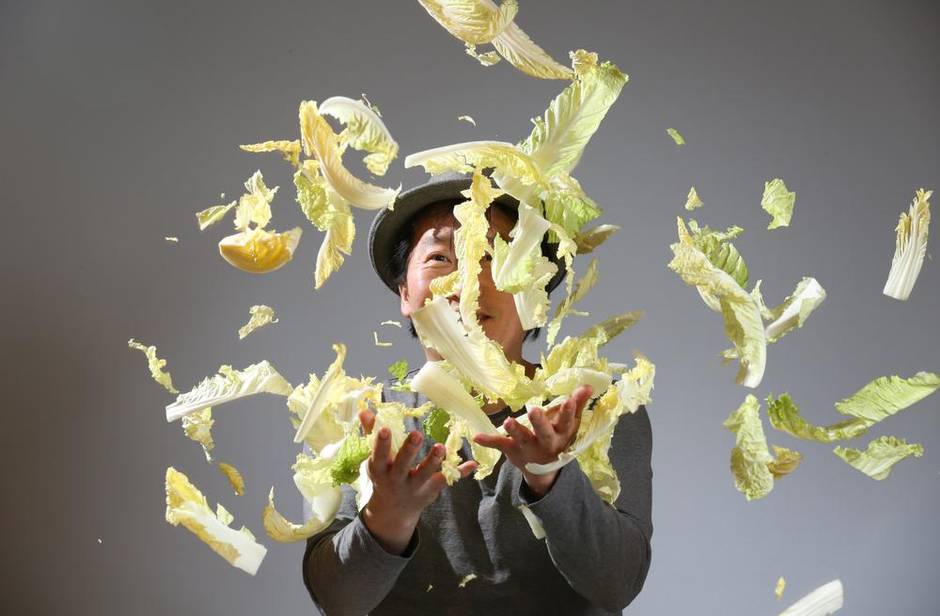 (Photos by Peter Power for The Globe and Mail)

Kale’s ascendance to vegetable royalty was confirmed when recent reports of a worldwide shortage turned out to be false and nothing more than exaggeration – when was the last time a vegetable received the paparazzi treatment, rumours and all? Shortage or not, kale is now in such high demand that, according to the U.S. Department of Agriculture, prices have risen by 25 per cent since 2011.

At the risk of gentrifying another vegetable, I’m going to suggest that kale fanatics turn their gaze to a different humble product of the earth: the cabbage. If hockey is our (unofficial) national sport, then cabbage should be our national vegetable. This vegetable represents the essence of our country; it connects us to our past, but also speaks to our future food culture. As the frost eliminates freshly grown greens from our local farmers’ fields, it’s time to rehabilitate the most practical of the brassicas.

Cabbage didn’t arrive on this continent until Jacques Cartier brought some from France in 1541 – it had been grown long before in ancient Rome and Egypt as well as by the Greeks, who said the vegetable originally sprang from Zeus’s sweat. But this Old World crop adapted easily to Canada: It stores well over winter, it’s strong in the face of cool weather and it’s incredibly versatile. You can eat it raw – chopped for coleslaw or a Thai-inspired salad with peanuts and fish-sauce dressing. Or simmer it in soup, stir-fry it, curry it, add it to stews, braise it, ferment it.

“Cabbage is something that really reveals the terroir,” says Sang Kim, Toronto chef and owner of several restaurants including Windup Bird Café, who’s had a life-long love for cabbage.

“A beet grows its hard shell around it and you’re not really tasting where it came from,” Kim says. “With cabbage, the juice you extract from it comes from that earth.” 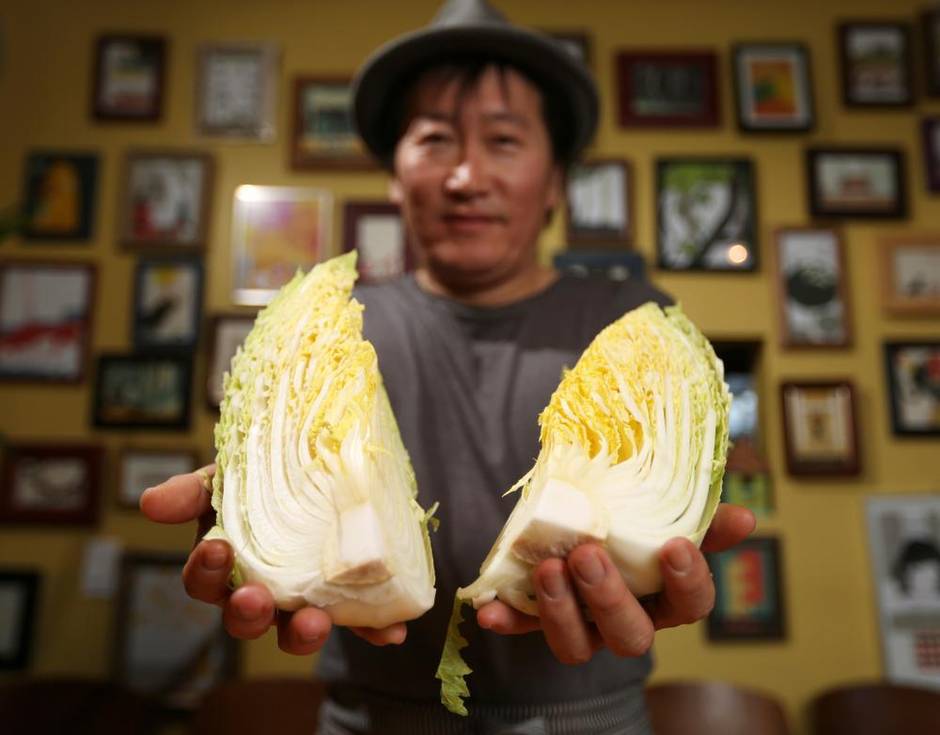 Chef Sang Kim and some handfuls of Napa cabbage.

While in the United States kale is appreciated for its connection to traditional American foodways, cabbage can similarly remind us of our Canadian past. It is one of the staples that fed early European settlers.

According to Dorothy Duncan, food historian and author of several books about Canadian food history including Nothing More Comforting: Canada’s Heritage Foods, Europeans ate a lot of cabbage because it thrived in our soils and each group of immigrants used it in their own way.

The Pennsylvania Germans first brought sauerkraut to Canada, she said. Scottish settlers also pickled cabbage in barrels and made a dish called rumbledethumps that combined potatoes and cabbage with melted cheddar. Cabbagetown in Toronto was named after all the cabbages that its largely Irish population grew – or possibly the sulphurous smell of boiling cabbage that hung in the air. According to Duncan, cabbage fell from popularity as long as 75 years ago.

“After the war, people came from all over the world, bringing with them their cooking habits and ingredients,” she said.

“We saw all these vegetables and fruits we’d never seen before. I imagine that was when cabbage lost its favour.”

There are hints that a cabbage renaissance has already begun. Kim, for one, recently asked his chef to start to develop some cabbage recipes in light of the escalating price of kale. “I turned to my chef and said, ‘Let’s do something,’” he said. “Kale has become ubiquitous. You have to turn to the next big thing.” 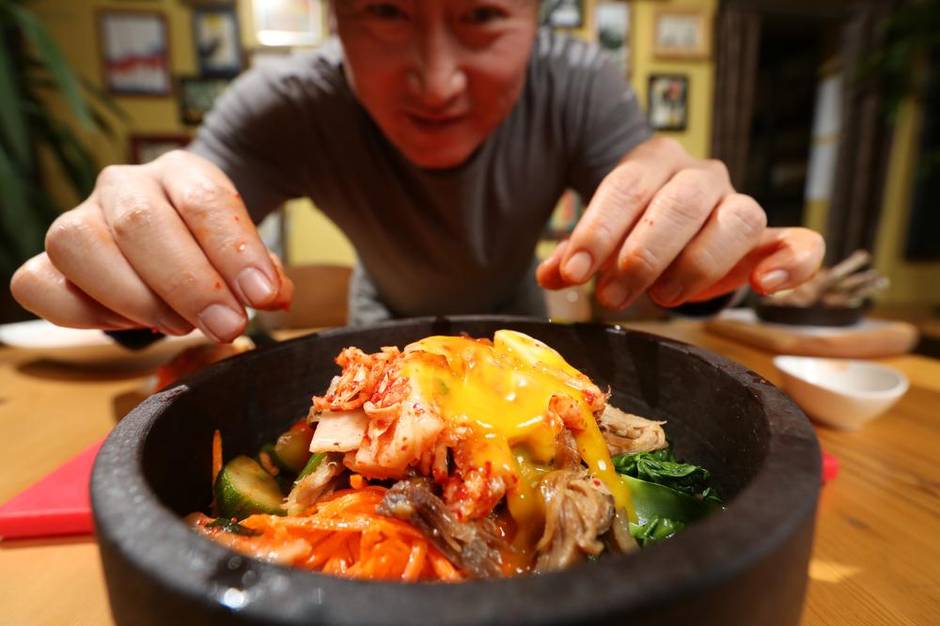 Chef Kim presents kimchi-topped bibimbap at the Windup Bird Café in Toronto. ‘Kale has become ubiquitous,’ Kim says of vegetables. ‘You have to turn to the next big thing’ – cabbage.

In Newfoundland, where a one-pot dish called Jiggs dinner – which combines split peas, salted meat and hardy vegetables such as turnip and cabbage – has long been a part of home cooking, chefs are experimenting with cabbage.

“There’s a lot of chefs doing cabbage,” said Adam Blanchard, chef and owner of Five Brothers Artisan Cheese, outside St. John’s. “Braising it. Bacon-wrapped cabbage rolls. It’s an inexpensive ingredient that can be used in many dishes.”

The cabbage’s chances at being an “It” vegetable are heightened by the fact that its flavourful leaves lend themselves to pickling of all sorts: From Eastern European-style sauerkraut to the Salvadoran cabbage pickle called curtido to Korean kimchi, fermentation is cool. 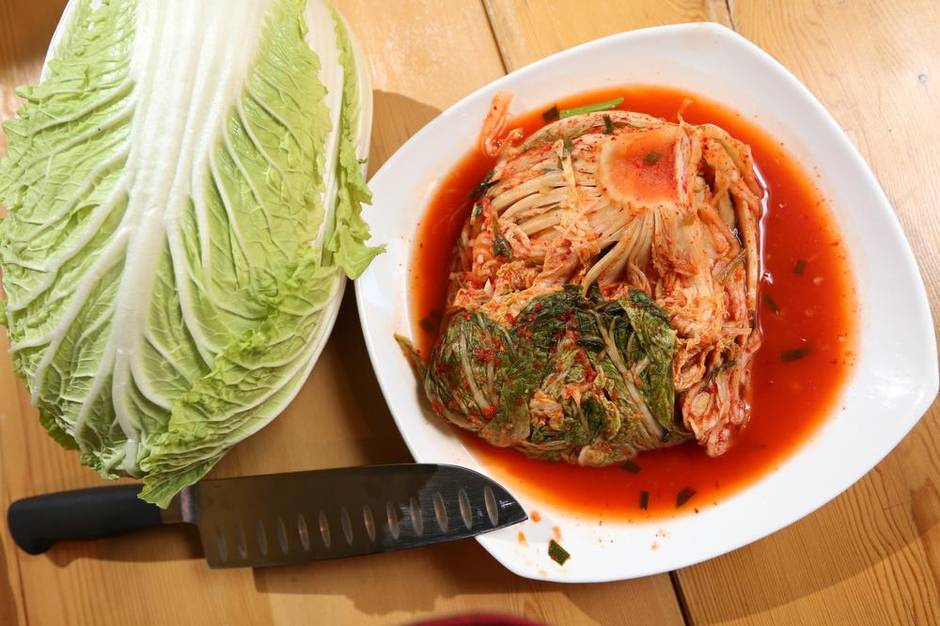 A finished kimchi and a napa cabbage that was used to make it.

Already kimchi has stolen the hearts of many North Americans who have no Korean roots, and has made its way into mainstream food culture. You can buy jars of it at supermarkets that don’t cater in particular to Asian tastes. Chefs in trendier establishments ferment their own, in-house, a move that could be credited to celebrity chef David Chang. At Kim’s other Toronto restaurant, Seoul Food Company, he offers kimchi poutine.

Regardless of species, for the purposes of this argument, let’s lump cabbage together with napa cabbage. They taste awfully similar, they are equally flexible in recipes and they’ve both been grown in Canada for generations.

As well, according to Dan Brisebois, one of the farmers at the Tourne-Sol Co-operative Farm, west of Montreal, both grow beautifully here. Brisebois is participating in a trial organized by the Bauta Family Initiative on Canadian Seed Security, breeding biodiverse seeds. 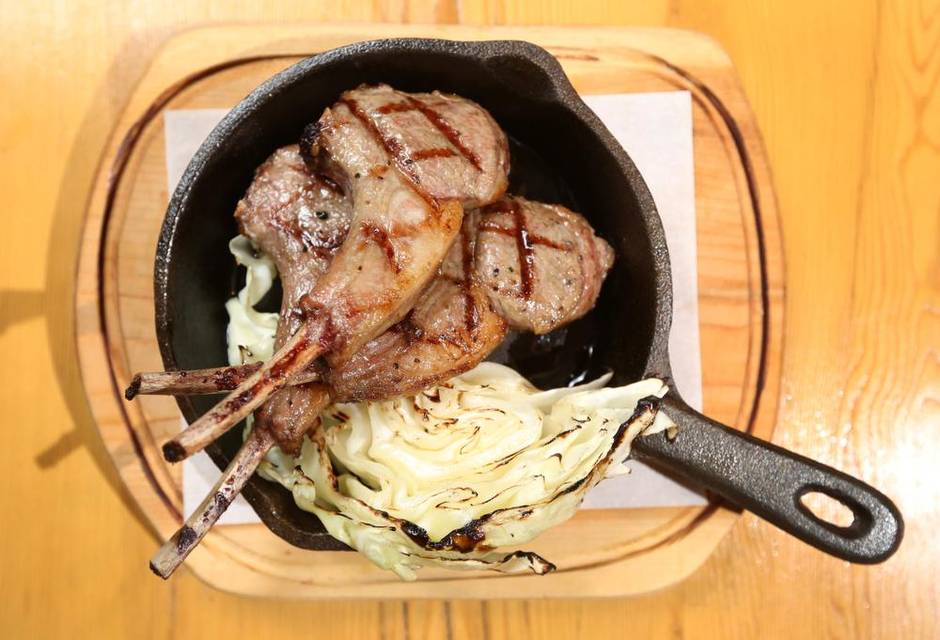 Another type of cabbage, the Korean cabbage, is sliced, grilled and served with a rack of lamb in a skillet.

For the project, he and other farmers are growing old seed lines from seed banks in the hope of finding the perfect napa cabbage. Because despite the fact that cabbage grows well in Canada, according to Agriculture and Agri-Food Canada, it’s one of the leading crops we import from the United States.

“There’s a value in a crop that is grown here,” says Helen Jensen, who co-ordinates the Bauta seed program. “If we have varieties that can grow here, [consumers] have access to so much variety – rather than buying the variety that grows well in California, that can ship well and store well.”

Which, Brisebois supposes, could explain why – okay, let’s face it – not everyone loves the cabbage. “Farmers who direct-market to clients at farmers’ markets are looking for taste and overall likeability. But I don’t think flavour is the prime selection in the grocery store,” he says.

Just one cabbage has so much potential. Not only can you can make many meals from one head, but there’s poetry in a cabbage since it changes as you cut into it. “Cabbage itself has different textures throughout its whole shape,” Kim says. “When you get into the core you find a greater degree of sweetness.”