Paul Cocchio’s introduction to inland shrimp farming did not go well. There is no manual, after all, for converting a rural Ontario hog barn into a temperature-stable complex of tropical saltwater shrimp pools – nobody had ever tried it before him. And it’s a surprisingly finicky business growing baby crustaceans, each of them translucent and about the size of an eyelash, into the sort of full-sized, sweet-flavoured specimens that could grace a proper seafood plate.

Cocchio, who had spent most of his life raising pigs and dairy cows and farming his 450 rolling acres, and who had devoted his years so far to the terrestrial and the visible, could barely keep the tiny things alive.

They got sucked into water pumps. They got wiped out from over- and underfeeding; a few grams of food either way spelled certain doom. Last winter, his hot water heaters all gave out.

After years of planning and construction – not to mention the two years it took to have Pacific white shrimp added to the list of species that can be legally farmed in Ontario – the 49-year-old farmer nearly gave up.

“When you’re putting 12,000 shrimp in one of those starter tanks and getting only 500 of them to survive, that’s not great,” he said.

But on a sunny afternoon this month, as his son – and business partner – Brad, swished a net through one of the barn’s ponds, it filled with glistening, fighting, fully grown shrimp. Cocchio looked for all the world like a man who’d discovered the tip of a diamond seam under his living room rug. 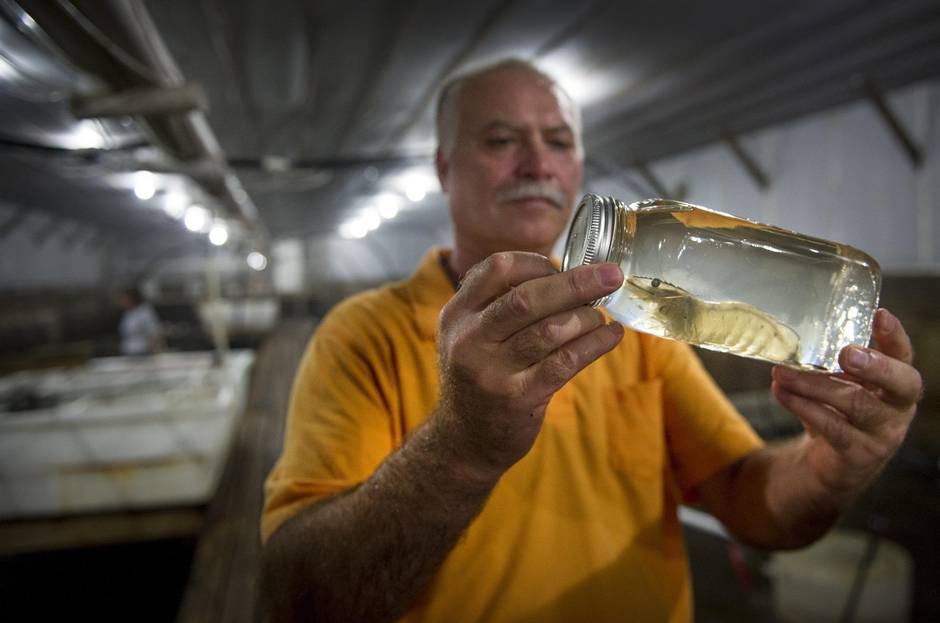 Farmer Paul Cocchio of Campbellford, Ontario shows off one of the Pacific white shrimp he sells to Toronto restaurants. (Photos by Kevin Van Paassen for The Globe and Mail)

The pair’s pioneering operation, called First Ontario Shrimp, now spins out the most sublimely fresh and delicate-tasting jumbo shrimp ever served in this province, by all indications the first to be successfully farmed in Canada. The tiny project provides a taste of a future that seafood lovers and many conservationists have long imagined: one in which maritime species can be raised indoors in otherwise landlocked regions, in zero-discharge aquaculture farms within a couple hours’ drive of major markets.

“After 25 years in the seafood business, I don’t get to see a lot of new things to get this excited about,” said John Bil, who serves the shrimp at Honest Weight, his restaurant in Toronto’s west end, and sells 40 pounds a week at the shop’s fish counter.

It’s not merely the freshness or quality, however: Cocchio’s operation bears virtually none of the appalling ecological and human costs that continue to plague the shrimp industry worldwide.

Ocean Wise, the Vancouver Aquarium’s influential marine-conservation body, has thrown its support behind the project. This month, the Toronto restaurants Momofuku Shoto and the Black Hoof also put the Cocchios’ shrimp on their menus, with many other places clamouring for supply. 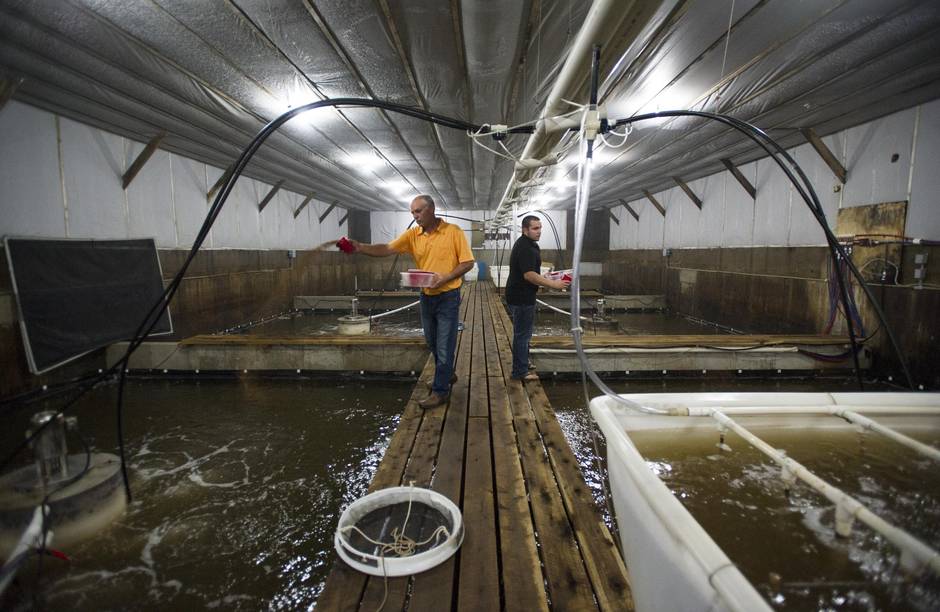 First Ontario is only the beginning of a central Canadian shrimp bonanza. A few hours southwest of Campbellford, in a former Imperial Tobacco plant in Aylmer, Ont., construction is set to begin on a state-of-the-art, 65,000 square-foot operation called Planet Shrimp. The facility’s first phase, slated to open late this year and begin shipping by April, has the capacity to produce some 400,000 pounds of top-quality shrimp annually.

Planet Shrimp has hired expert aquaculture consultants from the southern United States, where closed-system shrimp farming is a booming business, to guide its operations. They’ve also brought in structural engineers and architects to develop a proprietary system that will stack the shrimp ponds seven or eight high, to maximize productivity, said company founder Marvyn Budd.

“We’ll harvest at 10 o’clock at night, put it on our trucks at 2 o’clock in the morning, it’ll be on the distributors’ docks at 3 o’clock and in the restaurants by noon,” he added. “It’s fresh, man. Fresh.”

“The Cocchios are the pioneers, the innovators – they started this,” said Steve Naylor, aquaculture specialist with Ontario’s Ministry of Agriculture, Food and Rural Affairs. “Planet Shrimp is moving the scale up by literally 50 to 100 times. If Planet Shrimp is successful, it’s going to make a huge difference in the way that shrimp are grown in temperate climates.” 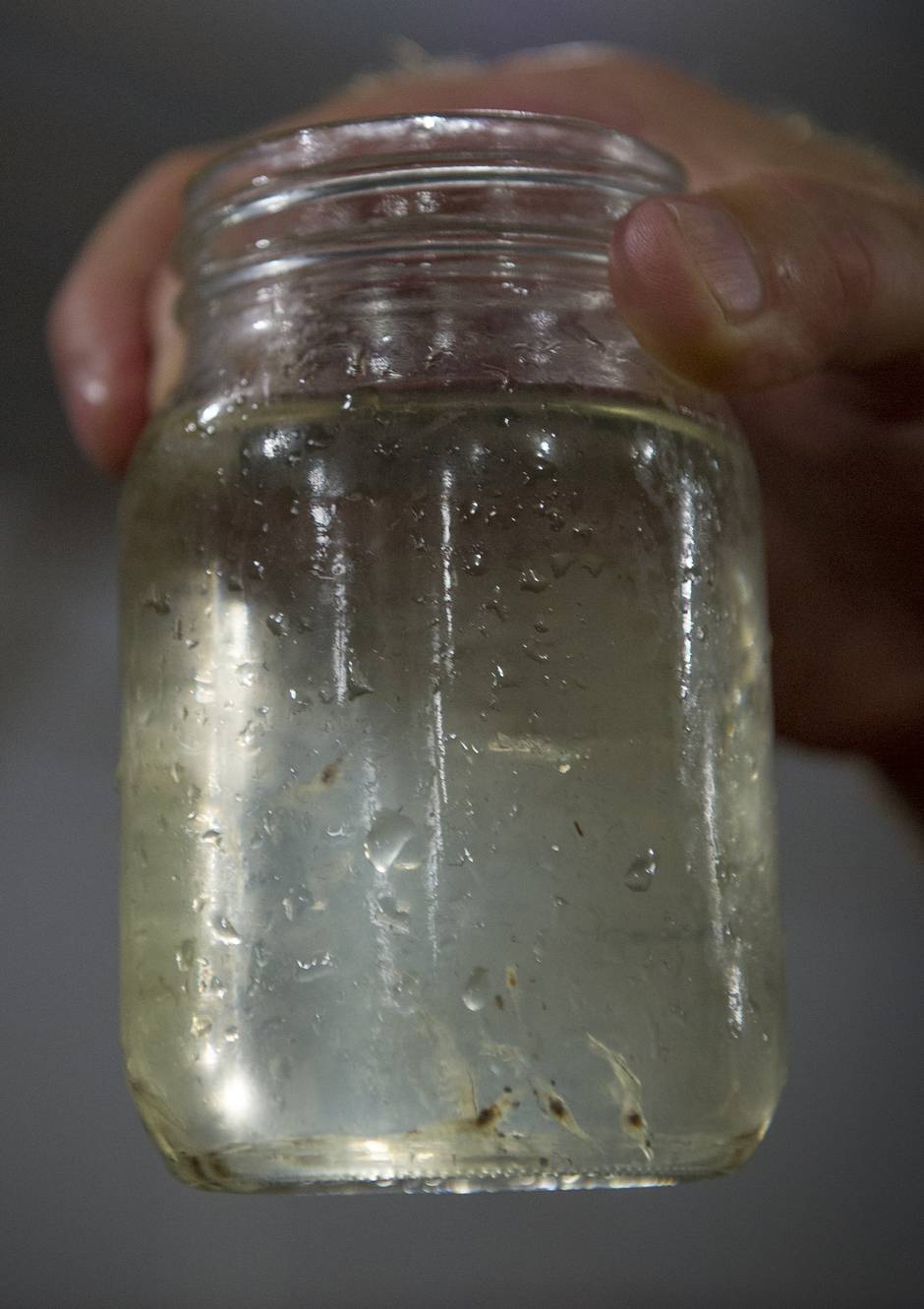 Shrimp is North America’s favourite seafood: Americans consume more than a billion pounds of it annually, with nearly all of it sourced from overseas. Shrimp farming has been commonplace in Southeast Asia for decades, but in open outdoor ponds that carry enormous environmental and human costs.

In Thailand, Indonesia, Vietnam and other countries through the region, as well as in China, shrimp and prawn companies clear cut coastal mangrove forests, then pump the remaining ponds full of chemicals and antibiotics, said Daniel Pauly, a marine biologist and global fisheries expert with the University of British Columbia. Those drugs end up on our tables: Canadian federal inspectors have found tetracycline and fluoroquinolone antibiotics in imported shrimp, as well as nitrofuran, an antimicrobial drug that’s banned here for use in food-producing animals.

For feed, those shrimp get a meal of cheap, ground-up wild fish that are, in many cases, caught by human slaves. (More than 2,000 captive fishermen, lured onto Thai trawlers, on which they were held captive and brutally abused, have been freed in the past six months alone.)

Trawling for wild shrimp, meanwhile, comes with its own consequences: Every kilogram caught requires many multiples its weight in marine fuel, Pauly said, and kills between five and 15 kilograms of other aquatic species, which are thrown away as by-catch. “Whether you catch them or farm them, the environmental cost is immense,” he said.

Inland aquaculture farms such as the Cocchios’ operation avoid many of those issues. That hog barn is divided into 16 concrete ponds, each with its own specialized pump and precisely calibrated water biology. The Cocchios don’t use antibiotics or chemical additives save salt and a bacterial starter to encourage the growth of shrimp-friendly algae, which consume waste and grow into valuable food.

There’s little risk of impact on neighbouring wild marine species; the Pacific white shrimp can’t survive for more than a few minutes outside warm saltwater, and in any case, the nearest ocean is 500 kilometres southeast of here. The project is also a zero-discharge facility: The water in those shrimp tanks is constantly reused.

That’s not to say indoor shrimp are entirely uncontroversial. Take the issue of what they eat: They still need to consume fish oil and wild fish, in the form of fish meal. But most of that comes from the (reasonably responsible, sustainability-certified) South American anchovy fishery. Theodora Geach, seafood specialist at Ocean Wise, notes the rapid progress that aquaculture researchers and feed companies are making to reduce the amount of wild fish in their formulations, and to replace it with soy and other plant products. 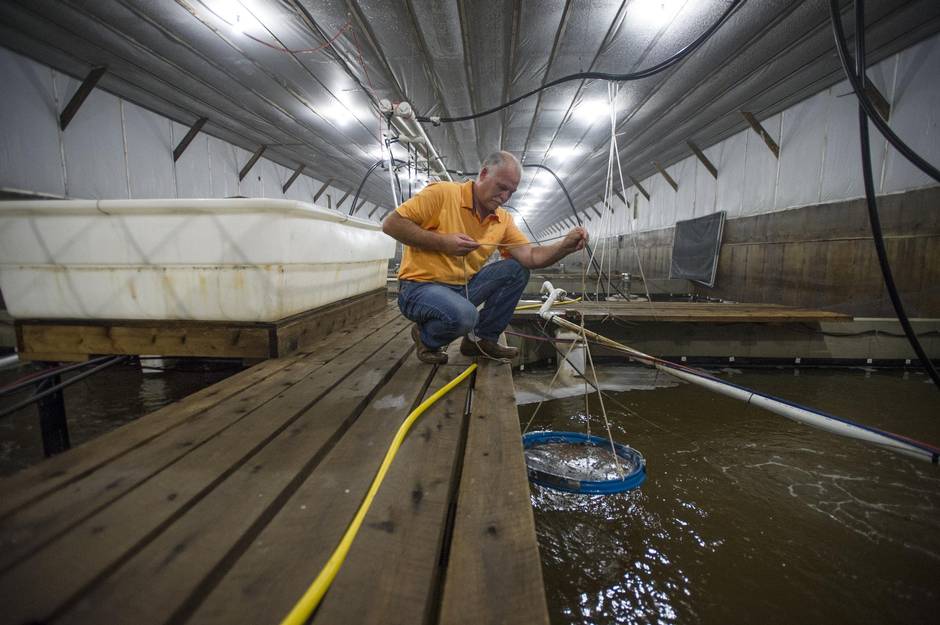 As for shrimp, a new farm is being planned in eastern Toronto. In B.C., there are ongoing efforts to raise both crawfish and spot prawns inland. Last year, municipal planners in Pincher Creek, in southwest Alberta, approved a shrimp farm application. But nothing yet appears to have reached the commercial scale the Cocchios have begun to achieve.

Paul Cocchio began planning their barn conversion eight years ago: The price of pork was making life as a hog farmer too difficult, so he started googling alternative uses for his barns. Former pig farmers in Indiana and Iowa had begun experimenting with aquaculture with some success, usually installing cheap, above-ground swimming pools in their barns, and equipping them with expensive heaters and pumps.

Cocchio wanted to do it better. Early indications are he’s succeeding. He and Brad have got their feeding schedule fixed to prevent over- or underfeeding. The water quality has stabilized, thanks to the bacterial starter they’re using; they even expect it to improve over time.

For now, they get 20,000 baby shrimp every two weeks, couriered overnight from a hatchery in Florida. It takes 17 weeks to grow them to full size. They’ve got far more demand for their shrimp at the moment than supply, though they expect their own production to quadruple in the next few months, to 400 pounds weekly.

But the family still has two empty hog barns. The other weekend, Cocchio said, a couple of strangers drove out to Campbellford and offered to put up the money to convert those into shrimp farms, too. “It’d be a lot cheaper than this barn, because we wouldn’t make all the mistakes,” he said.

The thing is, Cocchio says he isn’t interested in working with outside investors. He’s beginning to discover what a good thing he’s got.