A cookbook devoted entirely to ice pops? Laugh if you have to. Go ahead, say something smug about the underemployed artisan hipster class. But remember that while you and the kids in your life go on sucking dubiously flavoured, factory-made maltodextricles, you're missing out on roasted yellow plum and tarragon ice pops, and pops that are made with fresh cream and sun-ripened raspberries, or better still, cucumber-elderflower-tequila ones.

This is the summer of the gourmet ice pop: of small-batch, handmade, wacky-but-delicious flavoured frozen lollies that have far more in common with the farmer's market than the supermarket freezer aisle.

Tiny, artisanal (yes, artisanal) ice pop companies are springing up across Canada. La Catrina, a brand-new paleta company (paletas are Mexican ice pops; they're chunkier, typically) that's run by a couple of Montreal chefs, makes coconut-avocado-condensed milk ice pops, as well as corn and wild blueberry, and horchata-peach. At a restaurant in Toronto last week, I had a key lime pie paleta that had been rolled in graham cracker crumbs. (So fantastic.) You can buy gourmet ice pops at farmer's markets (Calgary, Vancouver), espresso shops, at bricks-and-mortar ice pop stores (Victoria, B.C. has one), and from ice-pop vendors who ride custom-built freezer bikes (Toronto). And nearly all of the budding popsipreneur class talk about expanding. Canadians can't seem to get enough.

The reason for the craze is simple: Ice pops that are made with fresh fruit and herbs like mint and basil or with booze are familiar enough to be recognizable, but also nothing at all like anything most of us have ever tried. They're concentrated, fresh-tasting, even jammy in some cases. They're for adults as much as children. Absolutely anybody can make them. You just need fruit, sugar, water and a freezer. Ridiculous as it sounds, an ice pop cookbook also doesn't hurt.

The book I have is called People's Pops. It's by the folks behind the Brooklyn, N.Y. company of the same name that pretty much started the iced lolly rush, back in the summer of 2008. The first time they made ice pops, Nathalie Jordi, David Carrell and Joel Horowitz brought them to a pop-up public food market, and sold out in just three hours. Before long, they had two bricks-and-mortar shops, were appearing on The Martha Stewart Show, and stocking the freezers at Whole Foods.

People's Pops is an excellent cookbook that's filled with novel flavour combinations like peach-jalapeno, or pear, cream and ginger. Their philosophy is simple. They celebrate everything that freezer-aisle Popsicles don't. (The Popsicle name is trademarked; it belongs to Unilever. Check the ingredients sometime. They often include gelatin, maltodextrin, polysorbate 65 and artificial colours and flavours.) The People's Pops people, like most of the new-wave ice pops makers, simply puree real fruit when it's in peak season, sweeten it a little, then freeze it on a stick.

In one afternoon the other week, I made five kinds, beginning with raspberries and cream. You puree fresh raspberries with a bit of simple syrup, swirl them with a teaspoon or so of 18 per cent cream, and freeze. I was hooked even before I'd poured the mixture into moulds.

I also made straight-up strawberry with a squeeze of lemon (so good) and grilled yellow plum with tarragon and yogurt (smoky, sweet, creamy and satisfying; you steep the tarragon with the simple syrup) and cucumber-elderflower-tequila (imagine your Edwardian great uncle boozing in Tijuana).

Blueberry-cardamom is fantastic, even if blueberries do turn brown in the blender. Cantaloupe-Campari is quite dangerously refreshing.

I brought ice pops to all my neighbours. I am not a hero, though some of them might call me that.

With all of those under my belt, I then developed a recipe for boozy, gingery, cucumber and strawberry-studded Pimm's Cup pops, based on the classic British cocktail. (Click here for the recipe.)

That's right. Pimm's Cup ice pops: the summer's greatest cocktail, but frozen on a stick. They look and taste even better than they sound and take an easy 30 minutes. You're not laughing now, are you? 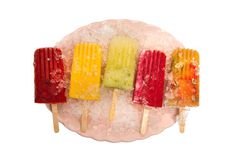 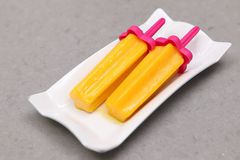 A chef who loves egg salad and Popsicles
December 6, 2011
Follow Chris Nuttall-Smith on Twitter @cnutsmith
Report an error Editorial code of conduct
Due to technical reasons, we have temporarily removed commenting from our articles. We hope to have this fixed soon. Thank you for your patience. If you are looking to give feedback on our new site, please send it along to feedback@globeandmail.com. If you want to write a letter to the editor, please forward to letters@globeandmail.com.
Comments