If anybody can give you advice on how to eat your way around the world, it's Anthony Bourdain.

The food writer and television personality has crisscrossed the globe several times over, tasting just about every cuisine he encounters. On his travel show The Layover, which premieres in Canada on April 11 on the Travel + Escape channel, Mr. Bourdain proves you can find great food, even if you have only 24 to 48 hours to experience a city.

Squeezing in a quick interview between meals, Mr. Bourdain shared some gustatory travel tips with The Globe:

What's the best way to find good local haunts if you only have a short, unexpected layover?

There's always food bloggers somewhere. Every city, it seems, these days has some food blogger who has been scrupulously recording grimy, downscale, locals-only establishments, serving whatever the local specialty is. On all of our shows, we talk to those people.

Google "Singapore street food" or Google the iconic dish of a place and then start looking for bloggers who do nothing but chronicle the best.

Generally disgusting. There are a couple of airlines that are really making an effort to get it right. A lot of it's not their fault. I mean, the regulations are such and the equipment is such that they're really murdering the food from the minute they put it on the plane. There's not a lot of real cooking they can do.

Also the human palate experiences food in a very, very different way at 30,000 feet than at sea level. You lose about 30 per cent of your taste buds as you ascend. Everything tastes different up there.

Flying after overindulging is never fun. Do you have any hangover cures?

Well, I just try to knock myself out. The longer you're able to sleep on a plane, the better. I'm a big believer in taking a pill.

What airport has the best food?

Probably Changi Airport in Singapore. I mean they have hawker food there, little food stalls of Chinese, Indian and Malay. It's such a great food culture. Plus they have a swimming pool, movie theatre, massage, spa, hotel, stuff that you actually want to shop for – it's pretty amazing.

Ever smuggle forbidden foods in your suitcase?

Umm...yes. I have a hard time resisting a really good unpasteurized, raw milk cheese. Or an entire Jamon Iberico from Spain would be a welcome thing to find in your luggage in New York.

For those who have young children, what tips do you have for travelling and dining out with Junior?

As the father of a four-and-a-half year-old, if my child started crying at the table, I've always felt the responsibility to remove her from the situation immediately. Immediately. Me and child are going outside. We're not going to ruin other peoples' dining experiences.

That said, I started bringing her to restaurants very early and also going on planes very early. And absolutely from the beginning, she's been quiet and well-behaved on planes and in restaurants. I don't know, I got really lucky. She's used to sitting at a table with a lot of different types of food. An iPad helps if she starts to get bored.

So how much of a feel for a city can you really get in 24 hours?

You're not getting a full overview, that's for sure. But I think if you're lucky enough to find yourself in a little, very local trattoria in Rome or Venice, let's say, where just locals are living their lives, and eating what they eat in their own town, I think you'd get a much better sense of a place than you would standing in line with a tour group, for sure. 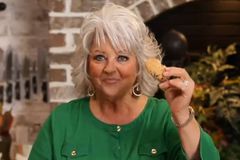