Steins are eclipsing martini glasses in Calgary, as a flood of new eateries open up with the words "tavern" or "public house" in their name.

Alberta's privatized liquor retailing system and the sheer volume of choice – up to 3,000 different beers available, double Ontario's selection – has helped create sophisticated beer consumers. But the brew's newfound popularity might also be a reflection of the economic mood, even in a city where the R-word isn't yet part of the conversation.

As WURST's Mike Mendelman says, "In a deep recession, people move away from martini and wine bars – beer brings you back to a more common, comfortable place."

Craft Beer Market is making its mark with draft beer: It has 100 craft brews on tap – billed as the country's largest selection. Customers sit at the massive oval bar beneath a tangle of chrome pipes that connect kegs in a glassed-in cooler out back to a forest of colourful taps out front. So far, 11 customers have tried all 100, their names engraved on a barrelhead plaque, with hundreds of others drinking their way through the list.

"The craft beer market is exploding with a number of different flavours and styles," says Geoff Allen, who recently renovated and relaunched Bottlescrew Bill's, his family's popular pub, with 250 bottled beers and 26 drafts on tap. "We get all sorts of people, but the majority have a large product knowledge and want to try new things."

That means following craft brewing trends, from over-the-top hops to extreme levels of alcohol. Publicans like Allen are putting an array of imports on the list, the kind with catchy names and crazy labels that attract young patrons. Ales are popular as are hoppy IPAs and sweet, fruit-infused Belgian styles, whether it's the What the Huck huckleberry ale from Fernie, B.C. or the American cult favourite Dogfish Head IPA.

But like the hyper-local trend in restaurants, it may be chefs, and their quest for seasonal, artisan products, fuelling Alberta's beer boom.

"We could see the craft beer movement booming in Portland and San Francisco and we wanted our restaurant to be part of that," says Ms. DeSousa pointing to their nine taps serving local microbrews. "People want to eat local and support local producers, and it supports our food concept as well. There's nothing like a cold beer with a hot sausage."

Other noted city chefs are putting their stamp on these beer-friendly menus, too – Paul McGreevy offers his take on pub food at Craft, with Oceanwise seafood and monthly beer pairing dinners, while Model Milk wunderkind Jason Leboe has designed the menu for his Concorde Group partners' string of new Local taverns.

While Alberta grows five million tonnes of barley annually, more than half of it for malt, the province lags behind the national brewing curve when it comes to microbreweries. Still, some local micros – including Calgary's Big Rock and Wild Rose breweries, Edmonton's Alley Kat Brewing Co., and Canmore's Grizzly Paw – are thriving and have new competition.

The Village Brewery opened in December and is already sending out kegs of its Blonde and hoppy Blacksmith black pale ale to local watering holes. In March, Minhas Micro Brewery – the latest endeavour of siblings Ravinder and Manjit Minhas' Creek Brewing Co. – will open a $5-million craft brewing plant.

"It's hugely ironic that we grow malted barley here that's second to none in the world, and we have the best hard water for ales, but fewer breweries," says Jim Button one of the local beer industry vets behind Village Brewery. Still, he says, there is a growing thirst for tastier, small batch beers from regional brewers and Calgarians now have more options to quench it. 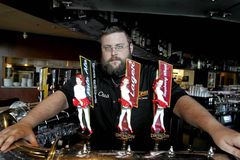