Rice-wine vinegar may be an essential ingredient in Japanese cucumber salad. But can you imagine wrapping your lips around this type of tart in a martini? Pucker up. Vinegar is the latest sour squeeze on the cocktail scene.

"I love sunomono salad so much, I just want to drink the bowl after I eat it," says Katie McDonald, a bartender at Veneto Tapa Lounge in Victoria. Realizing it probably isn't appropriate to slurp salad dressing in most restaurants, she did what any creative mixologist would do: She added booze, and turned a favourite dish into a tangy aperitif.

The new acids are catching on coast to coast. In Halifax, the Jitterbug Artisan Soda Fountain makes fresh-fruit, herb and spice sodas with homemade syrups and old-fashioned phosphates (a soda-fountain staple and early ingredient in Coca-Cola). Yes, the drinks do taste of vinegar, but not enough to make you wince. When poured sparingly, the vinegar works like any other acid to perk up the tastebuds, harmonize other flavours and smooth alcohol's harsh edges.

"We're just taking what we know works in the kitchen, and seeing if it makes sense with drinks," says Ms. McDonald, who also adds a dash of balsamic vinegar to balance her strawberry daiquiris.

Trendy though vinegars may now be, drinking them actually dates back to at least 400 BC, when Hippocrates (the original soda jerk, and father of modern medicine) prescribed apple-cider vinegar mixed with water and honey to cure coughs, colds and pleurisy, according to chemistry-textbook writer Richard L. Myers.

In 17th-century England, vinegar was commonly used to preserve berries and fruits for the off-season in what were known as shrubs. The tradition crossed the pond to colonial North America, where the bracing sweet-and-sour syrups were mixed with water and spirits for thirst-quenching beverages. Shrubs fell out of favour with the advent of home refrigeration. But thanks to experimental craft bartenders striving to rediscover and reinvent the historical tricks of the trade, vinegar cocktails are cool again. It's kind of like canning for hipster drinkers.

"People are going back to all the classic stuff," says Shaun Layton, head bartender at Vancouver's L'Abattoir restaurant. "Shrubs add another layer of flavour to spirits that are not as simple as your usual citrus," he says.

"It's a gateway drug," Shawn Soole, bar manager of Clive's Classic Lounge in Victoria, says of the Pok Pok Som apple, honey, tamarind, pomegranate and pineapple tinctures, now distributed in Canada by Vancouver's Mikuni Wild Harvest. "You can pick them up at a deli and they give you the basic taste of a shrub without getting too weird."

Well, the Pok Pok Som apple drinking vinegar is a little weird. The strongest of the tinctures, it really does taste like sweetened apple-cider vinegar. Mind you, that didn't stop me from going through a whole bottle in a week. It just needs to be diluted with plenty of soda and/or gin to prevent a puckering finish. At Vancouver's Union Bar, I found the Thai-basil and tamarind-guava dilutions much smoother. Served alongside bottles of lemongrass-scented soda water, the house-made drinking vinegars hit the spot on a hot summer night.

Mr. Soole, nominated for International Bartender of the Year at the 2012 Tales of the Cocktail festival in New Orleans, hasn't had any trouble hooking his clients on the new sours. After experimenting with shrubs and gastriques for the past few years, he recently discovered switchel, a Caribbean cooler that combines molasses, ginger, apple-cider vinegar, water and sugar. He's kept a 17-litre switchel keg on tap all summer.

"It's like gingery ice tea with a good acid content," he says. "When you taste this stuff, it makes you feel like you're down south in Kentucky."

If drinking vinegar on tap sounds strange, imagine "albino" cocktails blended with acid phosphate and lactart (its creamier cousin). The old-timey soda-fountain staples, once prized for imparting the dry tartness of lime and lemon juices without their overt citrus flavours, were rediscovered by Canadian bartender turned chemist Darcy O'Neil. Based in London, Ont., the cocktail blogger and author makes the neutralized phosphoric acid in his own lab, the Extinct Chemical Company, and sells the bottled liquids to adventurous bartenders through his website (artofdrink.com).

"There's nothing wrong with lemon or lime, but sometimes you just want a blank souring agent," explains Mr. Soole, who uses small drops of acid phosphate to make clear cocktails, including what he calls the albino aviation (a classic gin cocktail from the early 1900s that's usually a purplish blue from the addition of crème de violette).

"They're natural acids that give you the benefit of citrus without making a drink taste like anything in particular," he says. "Their mineral content attaches to other flavour elements, making them all brighter, and popping them up just a bit."

Sounds delicious. Make mine a double phosphate with a shot of vinegar.

How to grow a shrub on your stovetop

Shrub syrups are a traditional method of preserving fruit. Made with equal parts fruit, water, sugar and vinegar, shrubs taste both tart and sweet. When mixed with water and/or alcohol, they stimulate the appetite while quenching thirst.

Shrubs can be made through cold maceration or vinegar infusion. Some are steeped with alcohol or dosed with homemade vinegar using wild yeasts.

But the easiest recipe is the stovetop method:

Combine 1 cup sugar and 1 cup water in a saucepan. Heat gently, stirring until the sugar dissolves. (You can use granulated, cane, brown or raw sugar, or even molasses agave nectar or honey, if you prefer.)

Add 1 cup washed berries or fruit. Simmer until the fruit's juice is fully extracted. (Berries should be slightly crushed; stone fruit quartered and pitted; no need to peel the skins.)

Cool and strain off the solids.

Katie McDonald, bartender at Veneto Tapa Lounge in Victoria, loves the tangy taste of vinegar so much that she created a cocktail inspired by her favourite Japanese salad. Sour, sweet and surprisingly bright, the Sunomono Cocktail makes a perfect palate-cleansing aperitif.

Combine ingredients with ice in a mixing glass.

Stir and strain into chilled glass.

Garnish with a floating cucumber slice and, if so inclined, a kappa nori (cucumber roll – no rice) on the side. 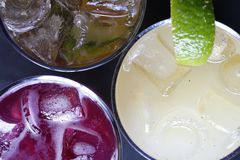 Cool, spicy and bracing: This is the spirit you should be using in summer cocktails
July 3, 2012 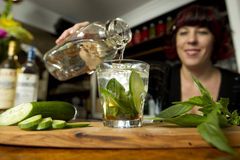 These three cocktails are springtime in a glass
March 6, 2012 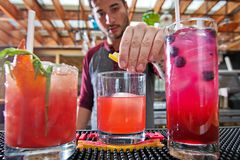