Cora Mussely Tsouflidou, founder and president of Cora's Breakfast and Lunch, the nationwide restaurant chain, has been named the Veuve Clicquot Business Woman of the Year. The award will be handed out at a reception and ceremony held in Toronto Monday night.

Lise Watier, founder of the Lise Watier cosmetics brand and a past recipient of the Veuve Clicquot award, led a panel of judges who chose Ms. Tsouflidou, a native of Quebec's Gaspé Peninsula, from a roster of Canadian nominees. Criteria included entrepreneurial skills, financial success and corporate social responsibility.

"Cora was the first in the industry to open a chain of restaurants focused solely on breakfast, a little explored segment of the hospitality industry when she started her business in 1987," Ms. Watier said. "And she did it as a mature woman with a family to raise. To me, she represents every woman determined to realize her dream."

The remaining judges on the panel – Mary Aitken, founder of Toronto's Verity Club for women, Barbara Stewart, partner and portfolio manager at Cumberland Private Wealth Management, and Christiane Germain, co-president of Groupe Germain, the Montreal boutique-hotel chain and another past recipient of the Veuve Clicquot award – were unanimous in praising Ms. Tsouflidou for rising above her humble origins to become a leader in her field.

"There are few women who can take a leadership role in a male-dominated industry," Ms. Germain said.

"Cora is an inspiring example of the self-made businesswoman," Ms. Stewart added.

Reached by phone in Montreal in advance of the award ceremony, Ms. Tsouflidou, 67, said she was thrilled to have been chosen by her female entrepreneur peers.

"It is a big honour for me," she said. "I started as a single mother of three when I was 40 and I worked very hard. At the beginning, it was all about surviving. So to be honoured like this, to see my hard work now internationally recognized, is really something for me."

The grandmother of six has built her chain of 120 restaurants in nine provinces into one of Canada's most successful franchises. In 1987, she purchased a defunct snack bar in the Ville Saint-Laurent district of Montreal as a way of making ends meet. Ms. Tsouflidou came up with the idea of serving breakfast – not dinner – in order to be home for her children in the evening. Gradually, she involved each in the business, which they grew together, creating new recipes and innovating the Canadian food-service industry along the way.

In 2004, Ms. Tsouflidou was inducted into the Canadian Professional Sales Association's Hall of Fame and in 2005 received the Hall of Fame award from the Canadian Franchise Association. In 2013, the business was named one of Canada's 50 Best Managed Companies. The same year, Ms. Tsouflidou also won the Femmes d'Affaires du Quebec award for Entrepreneur of the Year, given by the Reseau des Femmes d'affaires du Quebec Inc.

The Veuve Clicquot Business Woman's Award was inaugurated in France in 1972 and honours the pioneering spirit of the French widow who ran the venerable Champagne company, Mme. Clicquot Ponsardin, also known as the Grand Dame of Champagne.

In 1805, the 27-year-old veuve (French for widow) took over the business after her husband died of typhoid, introducing new methods of Champagne making that are still practised today. The award that bears her nickname recognizes female corporate managers and leaders in various regions around the world.

Of her success, Ms. Tsouflidou said: "The expansion of the breakfast segment in the restaurant industry is now well known and that is because people all over are imitating us. We did not have prior experience in restaurants. We were just there to do what no one else was doing.

"I have a real passion for this," she added. "It is what makes me wake up in the morning."

Who will be the next Canadian to win the Veuve Clicquot Business Woman Award?
August 22, 2014 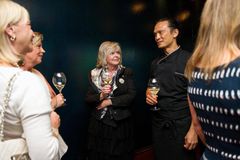