Tonight in his tiny, avant-garde Ottawa restaurant called Atelier, chef Marc Lepine plans to cook one of the strangest meals of his professional life.

The 15-course, $110-per-person dinner, which Mr. Lepine announced earlier this summer with a single message on Twitter, and which sold out just two days later, will include a composition called "carrot air" and a dish of liquid pea ravioli bound inside a polymer skin. And if the chef is able to source enough fresh rabbit heads, he'll also serve brains that are battered in pistachio powder and dehydrated yuzu peel and then lightly fried.

But that's not the strange part. What makes tonight's dinner stand out is that Mr. Lepine, who ordinarily is one of the country's most original chefs, will have stolen – or "borrowed" if you'd rather be diplomatic about it – every last one of the recipes from another chef. The event at Atelier will attempt to replicate the cooking of el Bulli, the groundbreaking modernist restaurant in Roses, Spain, that served its last meal this past July.

It's a "tribute dinner," a burgeoning restaurant-world micro-trend, and a term you're likely to hear much more of in the coming years as booming numbers of well-heeled, well-travelled diners compete for near-impossible reservations at the world's top restaurants.

Tomorrow night, René Rodriguez, the chef and owner of Ottawa's Navarra restaurant, will also cook an el Bulli tribute (he and Mr. Lepine are friends and plan to cook together for both events). In Chicago, Grant Achatz, a superstar chef who worked briefly at el Bulli before opening his own modernist temple called Alinea, has said he hopes to turn his second restaurant, Next, which changes theme, decor and menu every three months, into an el Bulli tribute for one of its incarnations. (Next's debut menu earlier this year was a tribute to Auguste Escoffier, the father of modern French cuisine.)

And in Stellenbosch, South Africa, chef Richard Carstens, of Tokara restaurant, held an el Bulli tribute dinner for 60 people the night the real el Bulli closed its doors. "The crowd gave us a standing ovation after the last course," Mr. Carstens said.

For food lovers who endured more than a decade of over-the-top critical raves about el Bulli but never had a chance to eat there, a tribute dinner is likely the only chance they'll ever have of tasting its food. Pej Vongpaisal, an Ottawa air traffic control engineer, spent four years trying unsuccessfully to score a reservation at el Bulli, he said. (The restaurant typically received two million requests annually for just 8,000 spots.) Mr. Vongpaisal has reserved not only for tonight's dinner, but for the one at Navarra, too.

But is faithfully copying another chef's work a tribute, or is it an extreme form of culinary theft? At least as long as there have been professional chefs, cooks have borrowed, copied and adapted each others' recipes. And for just as long, they've argued about where to draw the line.

Bryan Steele, the chef at the Old Prune, in Stratford, Ont., and a senior cooking instructor at the Stratford Chefs School, said that he draws his own inspiration mostly from shopping – he sees ingredients in the market, he said, and then he creates a dish. What he does not do, he said, is adapt or copy other chefs' recipes, unless he's personally worked with them first. "If I've staged with a chef for six months and I want to use one of his techniques, it's kind of mine," he said. "Otherwise, it's theft. It's stealing."

Yet many cooks – even the most creative ones – argue that cooking is a derivative craft in all but the rarest cases. When told of Mr. Steele's comments, Matt Kantor, a Toronto chef who runs a pop-up dining business called Secret Pickle, laughed and said, "Does he ever make pie dough? …

"Is he seriously inventing every single element of every dish he ever cooks?" Mr. Kantor continued. "I mean, come on, that's crazy." (Mr. Kantor is planning to cook three, eight-course el Bulli tribute dinners at the Cookbook Store in Toronto in October.)

Some chefs go to extraordinary lengths to prevent others from copying their ideas. Homaro Cantu, a chef who runs a modernist-focused restaurant in Chicago called Moto, makes his cooks and stagières sign non-disclosure agreements before they come to work for him. He has also managed to patent at least one of his signature techniques. But even patent authorities in the United States and Canada seem to feel that cooking doesn't deserve the same sort of intellectual property protection that's accorded to other creative fields.

Lists of ingredients can not be patented and are not eligible for copyright protection. The method part of a recipe is eligible for copyright, but anyone is free to rewrite them in their own words. The only recipes that can be patented have to be considered "novel and non-obvious," so while your grandmother's rhubarb and burnt cheddar hand pies wouldn't likely be granted protection, there is a Canadian patent for "aerated frozen suspensions with adjusted creaminess and scoopability based on stress-controlled generation of superfine microstructures." (It's a way of making ice cream.)

And el Bulli, more than any other restaurant, is a special case. The restaurant's chef, Ferran Adria, meticulously documented almost every dish over his nearly three-decade run. He published several cookbooks and trained hundreds if not thousands of stagières in his kitchen.

The techniques and aesthetic that Mr. Adria pioneered – from vacuum-compressed fruit to foams to the use of ceramic Chinese wonton spoons as single-bite serving vessels – have already been copied more widely than the work of nearly any other modern chef.

As both Mr. Lepine and Mr. Rodriguez pointed out, they're not making their livings by ripping off Mr. Adria – both dinners are one-time-only events, and the recipes, which are famously challenging, are hardly worth the effort in strictly financial terms. (Even after it won the title of the world's best restaurant, el Bulli lost half a million euros annually, Mr. Adria once said.)

The el Bulli cookbooks require technical cooking skills and equipment well beyond all but the most obsessive of home cooks. And as Mr. Vongpaisal pointed out, "El Bulli is closed. This is not about copying. It's more a tribute and paying of respect." (A representative for Mr. Adria said he was on vacation and couldn't respond to questions.)

For Mr. Lepine, the question he struggled with far more than whether to do the tribute dinner was whether he should cook el Bulli's recipes exactly the way they appear. Even Mr. Adria's admiring biographer, Colman Andrews, struggled with the chef's food sometimes; the notes from one of his last dinners there included: "Didn't love it." "Tasted like bubble bath." "Too much going on." "Didn't do a thing for me." "So unpleasant and cacophonous I wondered whether Adria had gone off the rails."

In the end, Mr. Lepine decided to do the recipes straight: "I want to make it as close to the real thing as I can." 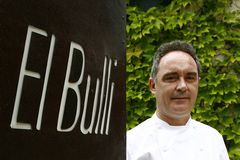