A fair isn't a fair without popcorn and cotton candy. But the secret ingredient for drawing a crowd is creativity – and preferably a deep fryer.

Over the past decade, carnival vendors across Canada and the United States have continuously upped the ante, rolling out ever-wackier treats to generate buzz, from deep-fried Kool-Aid to doughnut burgers. The competition to create the next big fair snack is cutthroat. Not only are there serious bragging rights at stake (who wouldn't want a place in food history?); the introduction of a popular new snack can result in a major boost in business. At some fairs, vendors can see their sales jump 150 per cent or more.

Fairs and carnivals have always been associated with fun, quirky food inventions. Cotton candy, originally called "fairy floss," was popularized at the St. Louis World's Fair in 1904. The first known hot-dog stand is said to have opened at Coney Island, N.Y., in 1916. But never have new fair snacks been more prolific, or quite so outlandish, as they are today. We are in the midst of a fair-food boom.

Where mini-doughnuts and corn on the cob once dominated the fair foodscape, you'll now also find shepherd's pie in a cone, bacon popcorn, and pulled pork on red-velvet pancakes. Even fried butter, which debuted at the Canadian National Exhibition in 2010, has been eclipsed by a newer assortment of headline-grabbing goodies.

"It's very important to wow [fairgoers] with a new product or new flavours," says Chantelle Gorham, owner of Northwest Fudge Factory. She has already recorded a 40-per-cent jump in sales since introducing her new deep-fried fudge to the CNE this year.

Inevitably, there are copycats when a fair snack goes gangbusters. Although some protective vendors do trademark their creations, many concessionaires simply view copying as a natural part of business. In fact, both the CNE and the Pacific National Exhibition have staff who travel to various fairs in the U.S. to gather ideas for their vendors.

One of the richest sources is the State Fair of Texas, ground zero for some of the most notable and mimicked snack inventions in recent years, including fried butter, fried beer and fried Coke. For these, Texans have the fair's annual Big Tex Choice Awards to thank (or to blame, depending on their waistlines). The contest, which selects the most creative and the best-tasting entries, challenges vendors to keep pushing their limits. Last year's winner in the most-creative category was fried bubblegum (which isn't actually gum, but bubblegum-flavoured marshmallow). When this item starts appearing at a fair near you, don't forget where you heard it first.

The State Fair of Texas was reportedly where the Fletcher brothers, Neil and Carl, first unveiled the corny dog (a.k.a. the corn dog) in 1942. It's also claimed to be the birthplace of the snow cone and the Frito pie, although the origin of the latter is debated. So in 2005, Texas fair officials decided to create the Big Tex Choice Awards as a way of extending the fair's legacy.

"It's unleashed quite a food craze," says Sue Gooding, vice-president of public relations, noting that competitors treat the contest as a big deal. And for good reason: When "chicken-fried bacon" – battered, breaded and fried strips of bacon – was selected as a winner in 2008, the lineup for it caused a major traffic jam at the fairgrounds.

Increased sales and greater fame, however, come with logistical challenges. Ms. Gooding recalls that deep-fried macaroni and cheese created such a frenzy when it was first introduced several years ago that the vendor was forced to hit up every grocery store and Wal-Mart in the Dallas-Fort Worth area to buy up her preferred brand of mac and cheese.

Nevertheless, for all those headaches, the payoff can be huge. Abel Gonzales Jr., a four-time Big Tex winner, went from operating a fair stand on a lark – during his vacation from work as a computer programmer – to earning enough to quit his day job. Now-famous fried butter and fried Coke (which is actually cola-flavoured batter) are among his inventions.

The process of coming up with a new snack isn't complicated. Mr. Gonzales says he simply experiments with different ideas using a deep fryer in his home kitchen a few months before the fair opens. (In case you haven't caught on by now, fried foods are popular at fairs. Like, really popular. The same goes for foods on a stick, which CNE concessions coordinator Michael Knott is constantly urging his vendors to serve. "I like to push things on a stick," he says. "Sometimes they call me food-on-a-stick guy." According to The New York Times, vendors increase their sales by 30 to 40 per cent by putting food on a stick.)

Certain ideas emerge as failures early on. Mr. Gonzales notes that fried peppermint patties turned out "awful," while frying cotton candy is impossible. "It would just come apart," he says. But otherwise, there is no blueprint for a successful snack, apart from the fact that it has to taste good.

One of the greatest challenges is to keep new inventions under wraps until they're ready to be revealed. As the fair snack scene has exploded, vendors have become fiercely secretive about what they'll roll out next. It's "James Bond, covert kind of stuff," Mr. Gonzales says, explaining that he is constantly fending off inquiries about what he has up his sleeve. "You're at the grocery store, and that's the first thing they ask, 'So what are you working on?' and you're like, 'Well you know, I haven't decided yet.' " 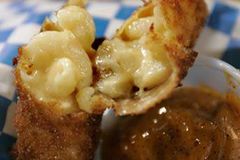 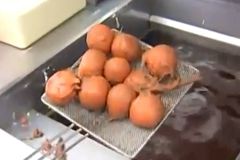