What if you came in to work and found a drawing of a penis on your desk, courtesy of your boss? Or if that boss took you aside to flash a smartphone selfie of his own penis? What if he started grabbing your crotch at the office? How long would you last in that job?

Pastry chef Kate Burnham says these disturbing scenarios happened to her, and in 2014 she filed a human rights complaint against three senior chefs at Weslodge, a Toronto restaurant. Burnham alleged that she was verbally harassed and routinely had her breasts and crotch touched at work, among other indignities.

Sexism, bullying and rage continue to plague many high-adrenaline, male-dominated kitchens. After Burnham went public this June, many rallied around her to decry rampant misogyny in the restaurant industry. Restaurant owner Jen Agg went further: the proprietor of Toronto's Black Hoof and Rhum Corner organized "Kitchen Bitches," a conference with the tagline "Smashing the Patriarchy One Plate at a Time."

The goal, according to its website, is "to change the antiquated, ridiculous notion, still held on to by far too many, that women don't belong in kitchens or leadership roles in restaurants." It's happening Thursday in Toronto.

Panelists hope to challenge a sexist kitchen culture by talking about it and building new norms. Among the speakers are Torontonians Suzanne Barr, owner of Saturday Dinette, and Sophia Banks, a transgender activist and cook at The Beaver. The Globe spoke with another participant, Toronto-born Amanda Cohen, the chef and owner of Dirt Candy, an award-winning vegetarian restaurant in New York.

What was your reaction when the Weslodge allegations emerged?

I was surprised and not surprised at the same time. This is still an ongoing part of the kitchen culture. You want to believe that it's not going to happen but it does.

How did bullying and sexist attitudes get so ingrained at professional kitchens?

It comes from the French idea of hierarchy in a kitchen. There is also a frat mentality: "I went through it, so now I'm going to haze you. If you want to be successful you're going to have to go through hoops."

What we have is a bunch of young kids without a lot of instruction. If their higher-ups aren't watching over them, bullying and sexual abuse can get out of hand. And if their bosses came up in kitchens where bullying was okay, we're going to have a whole other generation of cooks [who] act like this.

Some of the kids who work for me are so young; they come straight out of high school. We have a lot of conversations among our management staff because everything we do, they copy. They are learning how to be adults in our kitchen.

Noma chef Rene Redzepi, whose restaurant has two Michelin stars, recently wrote a screed against misogyny in kitchens. He pleaded with cooks to crawl out of the "Dark Ages" and asked an important question: "Can we be better? Perhaps, the real question is this: Do we want to be better?" Do you see a reticence among some to leave the Dark Ages?

There will be those who will want to hold on to the old ways. But there are too many of us who want a change and won't tolerate it.

Why the reluctance among some chefs to give up bullying their staff? What does that behaviour offer a business?

Nothing. In the end you don't get anything out of it. Your cooks don't become better cooks, they just become people who might want to go on and yell at others.

Having worked in a couple of really yell-y kitchens and now running my own kitchen for 12 years, I find I get a lot more out of my employees if they like me. If they're not terrified of me and respect me, they're more likely to stay on longer. I don't want to lose my cooks: I spent a lot of time training them and investing in them.

[Burnham] was afraid to go to work. Why as a boss would you want that? How do you live with yourself if that's the environment you create?

Something stressed at the Kitchen Bitches conference is that the "goal isn't to turn kitchens and restaurants into dry, PC, 'no fun' zones."

No, not at all. It's about making everyone enjoy their work environment. That doesn't mean there can't be some sexual humour – it's how you present it. If you run a good kitchen there's a lot of humour and you have lots of fun. One really valid point that Rene made was that you just have to try harder to be funny – sexual humour can be lazy.

What will ultimately change the sexism in this industry?

It's only in the past couple of years that people have realized this is an industry that does need to be regulated. We're starting to think about better policies, such as people not working as long hours. We still don't have maternity leave. We don't have any rules in kitchens – there's no standard for how you have to be. It's not an overnight change. We change it day by day.

How do you maintain respect among employees in your kitchen?

You don't always want to be the hallway monitor, but if you have to say something, you have to. That's the only way I know how to deal with it. We talk about it.

Redzepi recommended that culinary schools offer "a manual on basic human interaction." Would that help?

Cooking schools have a greater responsibility to their students now because there are so many passing through their doors. They're so young and they're going into an adult environment right away.

My landlord is a chef and a total vulgarian, and even he was disgusted by the Weslodge allegations. I'm hoping more guys in the industry feel the same way.

Most of the people I know run rather gentle kitchens. We don't support hazing or bullying. None of us really believe in yelling. Having come up in the ranks of some pretty bad kitchens, we all feel like this is our chance to make it right. 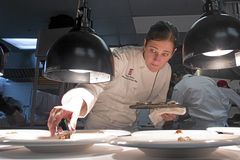