What's it like to have your own restaurant – at 23? When The Globe and Mail spoke last year to Eric Chong, the winner of the first season of MasterChef Canada, he was hoping to gain more experience with the Michelin-starred chef Alvin Leung in Hong Kong. This week, the former engineer and Mr. Leung (with some help from Oliver & Bonacini) have opened R&D, their take on a modern Chinese bistro, in Chinatown. Mr. Chong shares his experience so far of having his cooking career go from 0 to 100.

ON THE OPPORTUNITY After filming MasterChef, on stage, Alvin said he may have an opportunity for me to go to Singapore with him. At first it seemed more like a reward. But on like the second night, he said we should open a restaurant together in Toronto. For a person to be a three-Michelin-star chef and to give an inexperienced guy a chance – I would have even been happy just working for him. That'd have been a big jump already.

ON STAGING AT BUCA While the show was airing, I wanted to get real experience, so I got a stage at Buca. After two days, they offered me a fulltime job. They didn't know I won anything, they just liked my work ethic. I wasn't as fast as the other chefs. When I first got in to work, I'd come in three hours before I was supposed to punch in, just to get all my prep done. As time progressed, I'd come in two hours earlier, and then the latest I came in was one hour earlier. I never ended up coming in when I was supposed to.

ON COMMUTING Back then, I was commuting from Oakville. It probably took 45 minutes, sometimes an hour. And I had to pay for parking, too. They were 14 hour days, not including the drive. I'd get home at like 1 or 2 a.m., shower, eat, sleep and then wake up at like 9 a.m.. Sometimes I would wake up even earlier just to go to the gym. I moved downtown in January and sold my car. Now I have to walk everywhere.

ON COOKING: We did the majority of the R&D menu in Hong Kong and we replicated them here with Canadian ingredients. Buttermilk in Hong Kong is ridiculously expensive! You can only get them in small little jars. That's why our fried chicken doesn't have buttermilk in it. We have a special ratio of vodka and egg as our wet mixture. Vodka evaporates at a lower temperature than most other liquids, so you get this nice airy and crispy crust.

ON DETAILS I was only 25-per-cent prepared for opening a new restaurant. Michael [Bonacini] said, "Come up with a smallwares list." My first one was so vague, it was so bad. There were no dimensions, it was just like: pot, soup pot, pan, stainless-steel pan. What I really had to say was "nine-pan," and how deep, like four inches, two inches, six inches.

And when we were taking about table-settings: Are we going to have sharing chopsticks in the middle? How many utensils are you going to start with? And if they don't start with them all, are you going to serve utensils with all of them, some of them? How many times will you clear the plates? And where will you put the chopsticks then? Every detail was hard to think of from scratch.

ON BONACINI: He's actually very passionate about this stuff. I came in the other day and he was up on a ladder putting lights up. He's not afraid to get dirty. I think he moved the wok station with one other guy.

ON THE LOCATION This place is perfect because it has Green P parking right beside it. We want it to be a destination. You've gotta have parking; so many places don't and I hated when I'd come all the way down from Oakville and I couldn't find any.

ON RESPECT With my staff, I'm not going in thinking, "I'm better than you." No way. They've probably worked in kitchens longer than I have. That's why we agreed I shouldn't be head chef. I have no experience running a restaurant, but Nelson [Tsai, from Trump Toronto] does.

ON TORONTO: I was at Bar Raval the other day, that was quite nice. I can appreciate what they do: They open crazy hours, seven days a week, and the kitchen is so small and the amount of food they push out from there … things like that I just notice more now.

ON THE FUTURE: Down the line, I want a fine-dining restaurant. It's a dream to have like an Auberge [du Pommier], something with white tables and time to explain the dishes. This is perfect for my life right now: open kitchen, loud, high energy. The fine-dining one will be later, when I'm older and like more docile and hiding in the back.

ON THE NAME It stands for Rebel and Demon. I actually liked one of the other names that was suggested: InnovAsian. Puns are real. I thought it was pretty funny.

It ain't easy being MasterChef Canada: How Eric Chong went from cooking homemade soufflés to being a $100,000 winner
May 27, 2014 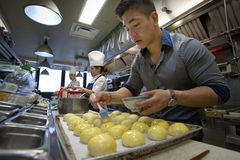 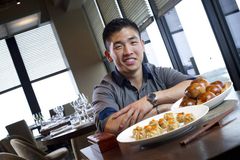 MasterChef Canada judge gives tips and tricks ahead of auditions
May 27, 2014 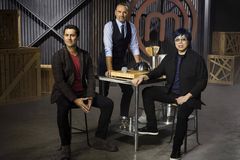