You've seen them growing on roadsides, invading vacant lots and threatening to take over your yard. They're rampant, they're unruly, and they may make your next meal a lot more interesting.

At this time of year, there's a bounty of edible plants underfoot, just waiting to be harvested. Want to add pucker to your pickerel? Try garnishing it with wood sorrel. Need to amp up your pesto? Throw in a handful of dandelion. Missing crunch in your salad? Pluck some purslane.

But don't stop there. Here are three more common plants we bet you didn't know you could eat:

These white-petaled flowers, also known as Chrysanthemum leucanthemum, can be found thriving in fields and along roadsides across the country. The B.C. Ministry of Agriculture classifies them as "noxious" weeds. But there's nothing noxious about their taste.

At Toronto's Forbes Wild Foods, the buds of oxeye daisies are preserved in a lemon marinade and sold as a delicate alternative to capers. The buds pair well with fish, and add texture to salads, says Dyson Forbes, who runs the specialty food supplier with his family. But while some people claim they taste of pineapple, Forbes is unconvinced. "Most of the time, I kind of taste spinach with them."

While mature flowers also serve as an attractive garnish, Forbes recommends harvesting the leaves before the plant reaches full bloom. The leaves can be eaten raw in salads, or preserved as kimchi, he suggests.

"Once they go to flower, they develop a little bit of bitterness inside the plant," he explains, noting that flowers sap a plant's energy. "The flower is still going to be very yummy, but all the other individual parts of the plant … tend to lose the amount of sugar they have in them."

These spriggy plants with dome-shaped flowers can be found growing in sidewalk cracks and on unmanicured lawns. The leaves lack flavour, but the felty flowers, which appear all summer long, make up for it with their incredible pineapple- and chamomile-like aroma.

Chef Justin Cogley of Aubergine restaurant at L'Auberge Carmel in Carmel, Calif., harvests the flowers to make a strong, fragrant tea. He starts by using roughly 100 grams of fresh flowers per 500g of water. (As a general guideline, he advises using three times as much pineapple weed as you would when making regular tea with tea leaves.) Then he lets it steep for about a week in the refrigerator.

The resulting liquid can then be strained and sweetened with sugar and put through a soda charger to make a refreshing, fizzy drink. Or Cogley suggests using the tea to poach fish or shrimp. If you want a more intense pineapple-weed flavour, heat the liquid first, until it reduces by about half. Then season it and poach away, or add scraps of parsley, thyme or fennel tops to give the broth more complexity. Just don't go overboard, lest you overpower the taste of chamomile, he says.

At the restaurant, Cogley has used pineapple-weed tea to make a sauce for salmon by adding soy sauce, katsuobushi (dried bonito flakes) and dashi. "It makes the most beautiful broth ever."

Daylilies are a popular ornamental garden plant, but you'll also find them growing wild on roadsides and in fields. Although there are a multitude of cultivars, Ellen Zachos recommends harvesting the bright orange kind, which are the most common and are safe to eat. Zachos, author of Backyard Foraging: 65 Familiar Plants You Didn't Know You Could Eat, says daylilies are a favourite among foragers because of their multiple edible parts.

Daylily buds, which are long and crisp, can be easily substituted for green beans in pickling recipes, Zachos says. Or, she suggests, simply sauté the buds with garlic in olive oil.

Fresh petals make an attractive addition to salads, and, when dried, create brilliantly coloured pasta dishes. But to Zachos, the most prized part of the plant are the tubers, which are tastiest and at their most plump in the fall or early spring.

"They're like fingerling potatoes," she says, noting she likes to toss them in olive oil and roast them in the oven or serve them sautéed. "They're really wonderful."

Since daylilies flourish when they're divided every three or four years, she adds, you'll actually be doing your garden a favour by digging them up and cutting off a quarter to a third of the tubers at the same time.

Petal power: These flowers (and recipes) are pretty enough to eat
May 11, 2018 Review
A Nordic-style take on local ingredients
May 11, 2018 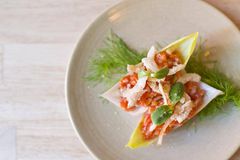 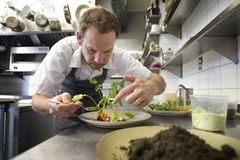