For people who like their dairy thick and decadently creamy, Greek yogurt can taste like a modern food miracle. The best fat-free versions have a sweet, milky flavour, and a texture similar to soft avocado, while higher-test varieties, which climb to 11-per-cent milk fat, often taste mildly like nuts and butter underneath their tangy top notes.

As if that weren't good enough news, Greek yogurt makers don't need to use non-dairy stabilizers and thickeners; many are 100-per-cent old-school, with nothing on their ingredients' lists apart from milk or cream and bacterial cultures. (That said, some do include pectin, and flavoured versions often contain modified corn starch, carrageenan, guar gum and potassium sorbate; see below.)

The secret is in the manufacturing. Traditional Greek yogurt is just regular yogurt, but drained of its liquid whey. Some commercial processors still make it this way, turning milk into yogurt and then draining it, while others start out by concentrating their milk instead. Either way, Greek's got about 40 per cent less liquid on average than ordinary yogurt, which is the trick behind that zaftig texture and taste. As its verging-on-rabid fan base will tell you, Greek yogurts also contain twice as much protein by weight as the regular stuff.

(Another secret: By draining regular yogurt for a few hours through cheesecloth you can make it yourself.)

Given a push by creative marketers, Greek yogurt has exploded onto Canadian dairy aisle shelves in the last 12 months. Where Greek accounted for less than 1 per cent of Canada's yogurt sales one year ago, today its market share has climbed five-fold, to 6 per cent. There are more than a dozen varieties of plain Greek yogurt available nationally, plus innumerable flavoured ones. In the United States, where Greek has had a seven-year head start, it comprises 20 per cent of yogurt sales.

Given all the choices, we decided to try and find the best Greek yogurt in Canada. One day last week, I was joined by John Allemang, a Globe and Mail feature reporter and long-time food writer with a diamond-sharp palate, plus Tralee Pearce, a food fanatic who writes for the Life section, and The Globe's food editor, Kathryn Hayward, for a blind taste test. To be fair, yogurt is a moving target. Commercial yogurts can change significantly from batch to batch, and because they contain active bacteria, their flavour often becomes less perceptibly tangy the longer they sit on dairy aisle shelves.

Nonetheless, the results were surprising.

A few brands that we know and like for regular yogurt made the worst Greek versions in our sample. On taste and texture, we disqualified Quebec-based Liberté's 0 per cent ("Thin, lumpy, chalky"), President's Choice 2 per cent ("Loose, runny spoonful of chalkiness"), and Skotidakis 9 per cent, which was too cheesy to our taste, and believe it or not, too rich to eat outside of dessert.

Chobani, the New York -based brand that almost single-handedly built the Greek yogurt market in North America, meantime, was also chalky and unpleasant. (See sidebar for the reasons so many plain Greek yogurts taste like chalk.)

But we also found a few standout winners: yogurts so creamy and perfectly balanced that it would be a shame to dress them up with honey or berries. In these cases, it was hard to put down our spoons. We named winners in two categories, high fat and low fat.

(Plus, we subjected each yogurt to a Totally Unscientific But Hilarious Hang-Time Test – TUBHHTT – to quantify texture: how long could a heaping spoonful held vertically hold on before splatting onto a table.)

Panel says: "Shiny, puckery gloop. Like milk that's been sitting on the counter for two days."

Texture: as thick and creamy as sour cream

Panel says: "So thick and so creamy tasting, I'd never add honey or anything sweet."

Taste: Not too sour, not too sweet

Panel says: "Ticks off all the right boxes: creaminess, richness, a little tang. It's not going to offend anyone."

Panel says: "Looks like it could double as bathroom caulking. The pleasures of fatty dairy at its finest."

Panel says: "The yogurt that does everything."

Though most consumers believe that Greek yogurt is just regular yogurt that's strained of its whey, commercial processors often don't produce it like that. Some, like Parmalat's Astro brand, contain milk protein concentrate, a low-cost processed milk product, as a thickener. Others thicken milk through ultra-filtration before they add the bacterial cultures that turn it into yogurt. This way they don't have to bother draining the whey once the yogurt has set, said Arun Kilara, a top dairy-industry consultant based in Chapel Hill, N.C. The problem with this last method is that the final product contains a higher-than-average proportion of denatured whey proteins, which cause that chalky taste and texture, Mr. Kilara added.

Ben Kroetsch, a dairy researcher at the University of Guelph who is in the final stages of a pilot project developing a single-herd Greek yogurt on behalf of Jersey Ontario, said the temperature that milk is heated to before it's inoculated with yogurt bacteria can also create chalky texture and flavour, as can certain acidity levels. Once a yogurt has gone chalky, the only way to remove the taste is to cover it up with flavourings, Mr. Kilara said.

Editor's note: In Canada, Oikos is sold under the Danone name. Dannon is the American version of the name. This version of the story has been corrected. 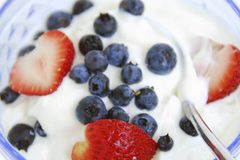 Is yogurt a key to treating mood disorders?
September 8, 2011 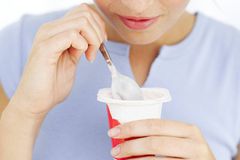 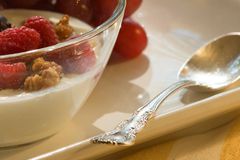