Some food traditions, like leaden fruitcake and overcooked turkey, are more symbolic than delicious. But others, like Andrea Mastrandrea's Zeppole di San Giuseppe, endure as naturally as the seasons. It's impossible to imagine giving up their taste.

Mr. Mastrandrea's zeppole are a pastry lover's fever dream. They're seasonal Italian doughnuts: cloud-light, custardy, sweet and savoury, with a whisper of what can only be described as citrus grove, plus creamy whipped semolina and sour-sweet Italian amarena cherries over top. As at most Italian-Canadian bakeries, they're available only from the weeks before March 19, the Catholic feast day of St. Joseph (San Giuseppe, in Italian), until a little after Easter. The market for zeppole is Italian-Canadians, mostly. The cuckoo-for-handmade-doughnuts crowd hasn't discovered them yet.

Mr. Mastrandrea, 38, is a baker, like his father. Some of his earliest memories are of standing on a milk crate at the family bakery in Woodbridge, north of Toronto, forming fragrant pasta di mandorle into crispy amaretti, or pressing freshly torn chunks of San Marzano tomatoes into pizza dough. He and his two brothers learned to manage the stone-bottomed oven to bake crusty, olive oil-enriched pane Pugliese and focaccia first thing in the morning, and more delicate pastries as the oven cooled throughout the day. Every spring they made zeppole, naturally.

"You trust your hands. Trust your nose," their father told them. They learned to make them by feel and smell.

Mr. Mastrandrea makes his dough with flour, lard, eggs and sugar, to which he adds freshly grated orange zest, and orange blossom oil that he imports from southern Italy in brown glass apothecary jugs.

He scoops the dough into a pastry bag, and then pipes it into tidy rounds. He par-bakes them and deep-fries them in canola oil, he says, a little guiltily. His father didn't bother with the baking step. His father never used canola, either. He piped the zeppole dough into his open palm, then dropped the rounds straight into boiling lard.

Once they've cooled, he cuts them open and pipes in semolina cream: superfine flour mixed with water and simmered, like polenta, and then beaten until it looks like whipped cream. The cherries: sour cherries packed into sweet cherry syrup, grown and packed in Italy and shipped in red and yellow tins. Mr. Mastrandrea drizzles his zeppole with the syrup too.

And then, when they're ready, he gives them away, handing them out for free to the curious, at Forno Cultura, the bakery he opened last November inside Alimento, an Italian food emporium on Toronto's King Street West.

King Street is hip and urban, with design firms, expensive restaurants and modernist furniture stores. It's a long way from the family bakery in Woodbridge, which his younger brother, Nicola, now runs.

Mr. Mastrandrea says what his father once told him: "If it's a great product, you only have to give it away once."

Though their father baked with his senses, he trusted tradition above all else. Giuseppe Mastrandrea learned to bake as a boy, in Puglia, then as a seminarian at monasteries in Sienna, and Camogli, in Italy's northwest. He believed in unyielding consistency, where Andrea wanted to experiment. Andrea and his father fought constantly, he remembers. One day, Andrea added two extra baskets of fruit to his father's gelato, and their customers loved it. It's the sort of thing he was always doing. His father was not amused.

Instead of following his father, Andrea studied architecture. But he worked days in the bakery to pay for his studies at the University of Toronto, and he missed it when he was away. In his final year of university, he studied in Florence. As he wandered from bakery to bakery, always tasting and comparing, he realized how good his father was. Giuseppe, in refusing to change or experiment from the moment he arrived in Toronto in the late 1960s, had preserved a craft that was evolving, and in many ways, dying, all over Italy. Andrea suddenly understood him now.

"I want to know everything," he realized. "I've wasted so much time."

They never talked about it, but he thinks his father saw the change in him. Andrea practised architecture after graduating but spent his free time baking. He couldn't keep away.

Last November, he opened Forno Cultura. He hired Laura White, a friend who is a top city pastry chef (she was at Susur for four years, then at JS Bonbons and Xococava) to work alongside him, and the pair began working out of Giuseppe Mastrandrea's hand-written recipe books.

With no formal training, Andrea doesn't know the usual kitchen vocabulary. Ms. White is forever reminding him that the zeppoles have been in the oven for four minutes, that they've got to come out soon to go into the fryer, that the electronic timer – something he's never bothered with – is about to go off. He likes to feel the dough with his hands, to bake by his nose, to work by distant memory.

They're not exactly the way his father made them. Andrea is still an experimenter at heart. But the changes he makes – frying the zeppole in lard, or adding that orange blossom oil – are deliberate and thoughtful. He doesn't believe in change for change's sake.

And a lot of what he knows he doesn't entirely understand yet. His father died in 2007. He has to figure it out himself.

When he pipes out a loop of zeppole dough, he overlaps the ends a bit, for instance. "Why do you do that?" Ms. White asked him a couple of weeks ago. They had to think about it.

It's what his father had taught him. He'd done it that way all his life. 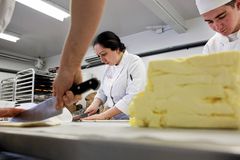 Blogger dishes on the art of French baking
November 8, 2011 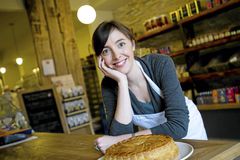 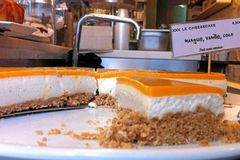 Dirty parenting secret: I hate baking with my kids
January 12, 2012 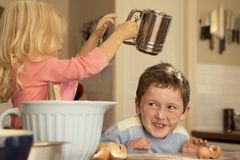