Though it may seem daunting, you can – and should – teach your children how to cook. In fact, they could be making you dinner next month 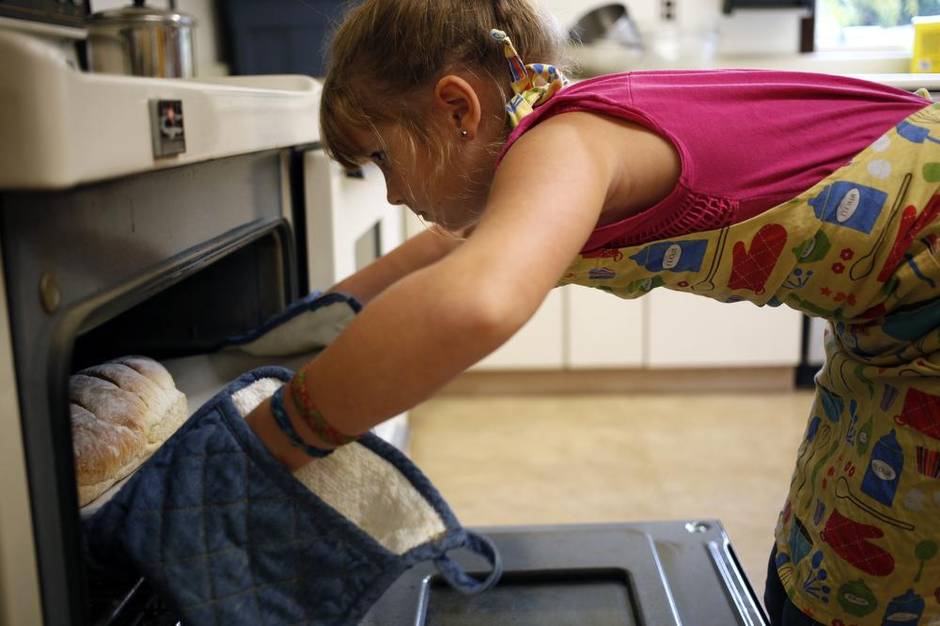 Laura Colwell, 10, removes fresh bread from the oven as part of the food program which has been part of a community-building organization at Galiano Community School on Galiano Island, B.C. (Photos by Chad Hipolito for The Globe and Mail)

What’s for dinner tonight? It’s the question parents so often dread. What is for dinner, indeed? In households across the country, so many of us experience this frustration nightly: How do you get healthy food on the table that everyone will eat?

Imagine, however, flipping that scenario around: What if the parents were asking the kids?

This seemingly far-fetched idea has inspired my resolution for the new year. I want to involve my girls, aged 7 and almost 10, more significantly in the kitchen. Their dad and I long have been asking them to set the table, clear the dishes, scrape the plates and load the dishwasher, which they do while gritting their teeth. I’ve already taught them to make a few favourite foods. This year, however, I want my girls to really cook, to make their grandma’s coconut chicken curry or a soup, without the help of powders, jars or cans.

At a time when fewer adults are cooking from scratch – according to an Industry Canada report, in a given day only a quarter of Canadians eat a homemade meal from scratch – research keeps telling us that cooking is a path to good health, particularly when it comes to children. So it’s a good time to get all kids – think age 10 and up – into the kitchen to share the job of feeding the family.

According to a 2012 study out of the University of Alberta, children who help cook meals have a greater preference for vegetables – 10-per-cent higher than those who don’t help out. The connection between health and cooking is so persuasive that, last September, schools in the United Kingdom implemented a new national curriculum for cookery as part of the country’s effort to improve children’s diets.

Kids can start helping as early as age 2, and by the time they approach middle school, they should be capable of cooking entire meals, says Kyle Cornforth, director of the Edible School Yard at Martin Luther King, Jr. Middle School in Berkeley, Calif., where students learn skills along the food chain, from planting and growing to cooking. They learn to cook in Grade 6, and by the time they graduate in Grade 8, they can make soup, sauces, even from-scratch dumplings. “Could a kid go into the kitchen and make dinner? Yeah, they can,” she says. “They really can.”

In the spirit of New Year’s resolutions, here’s a five-week plan to enjoy one landmark night in February when your kid will make you dinner. 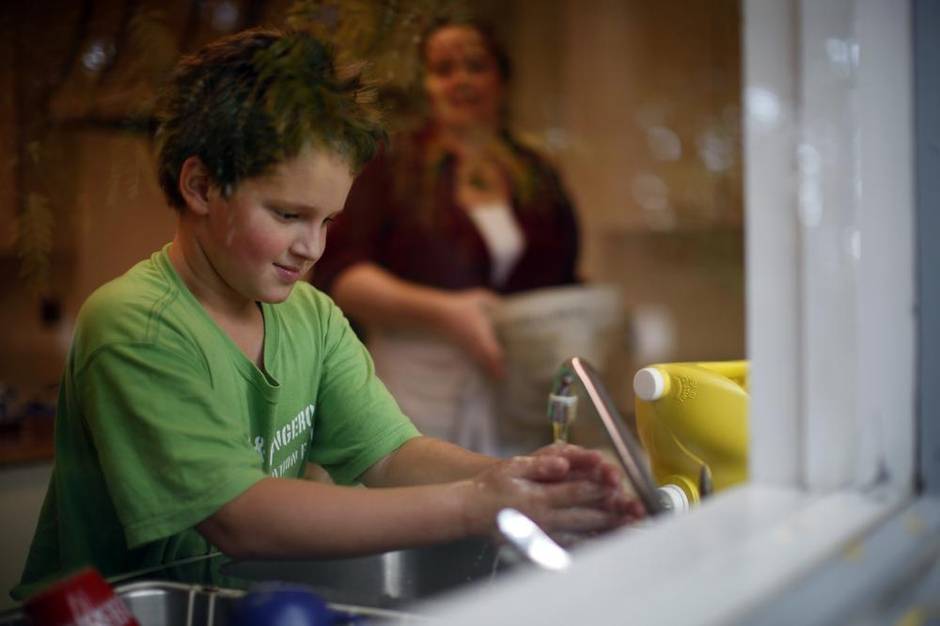 If you want to proudly eat your kids’ home-cooked dinners, they are going to have to use sharp knives and heat. Not only does this mean you have to teach them how to handle a blade, but you have to keep your parental anxieties in check. Remember, it’s important for kids to take risks, and kids learn through doing. The long-term goal is independence for your child. In fact, Martin Aller-Stead, a teacher who became a chef and runs a culinary arts course at Monarch Park Collegiate in Toronto, has found that often it is parents who stand in the way of progress in the kitchen. “Most [kids] are kept in a state of dependency by being told you can’t do this, you can’t do that,” he says. The kitchen is a great place to let go. “It gives them confidence and it also gives them independence,” he says. 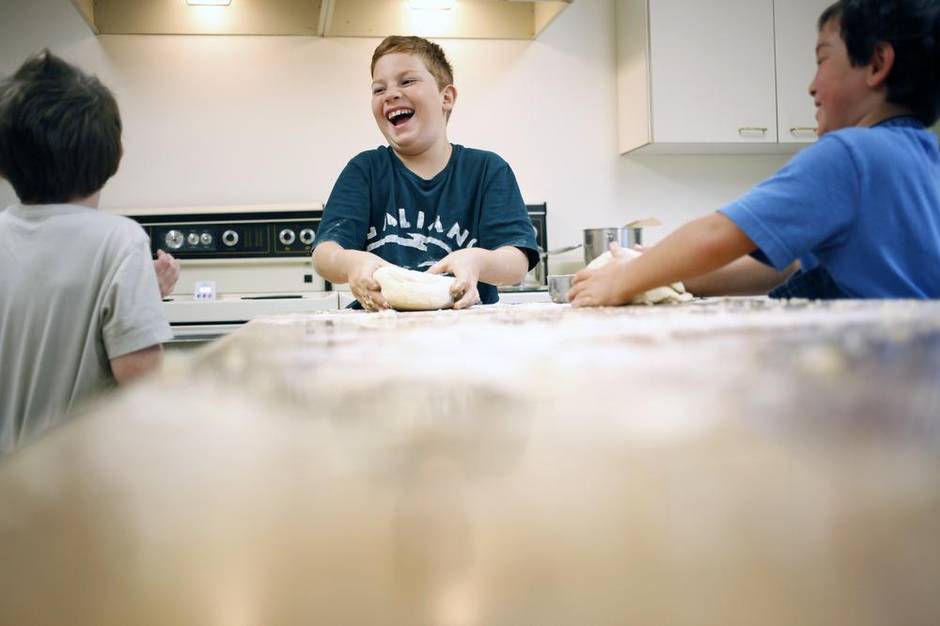 Caleb Wilson, 10, shares a laugh with classmates as he kneads dough. 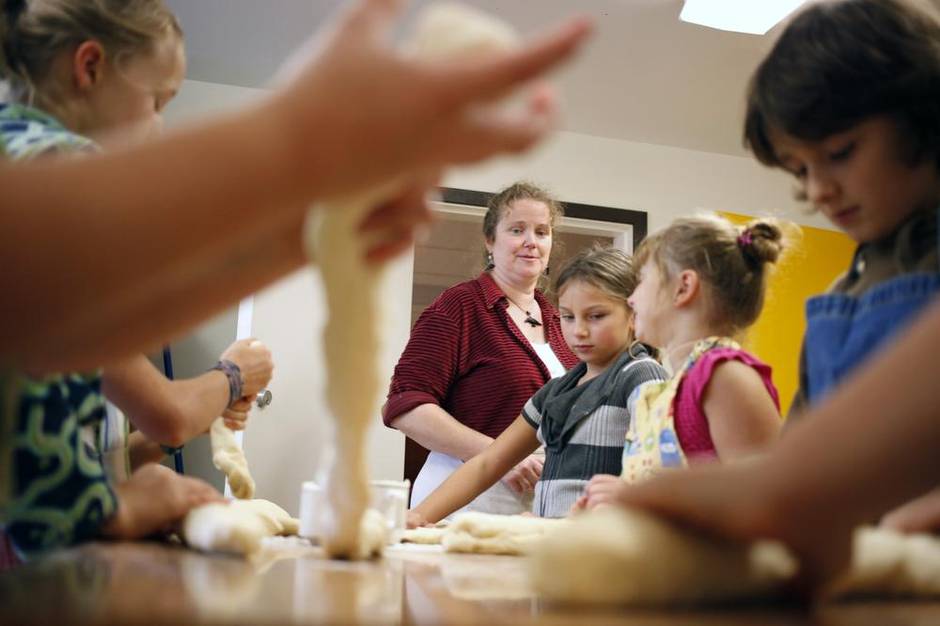 In the Edible School Yard kitchen, one of the first meals students learn to make is an autumn harvest soup. “We want them to understand that we’re not going into the kitchen to bake cake,” says Cornforth. Soup is a wonderful dish for a beginner because it is so flexible and forgiving and you can use whatever ingredients you have on hand. “Kids can see a recipe isn’t a strict mandate, but rather a guide,” she says. For their harvest soup, the students gather vegetables from the garden, and learn about eating with the seasons. Also, they learn about minimizing food waste by simmering carrot peels and garlic and onion skins to make stock. 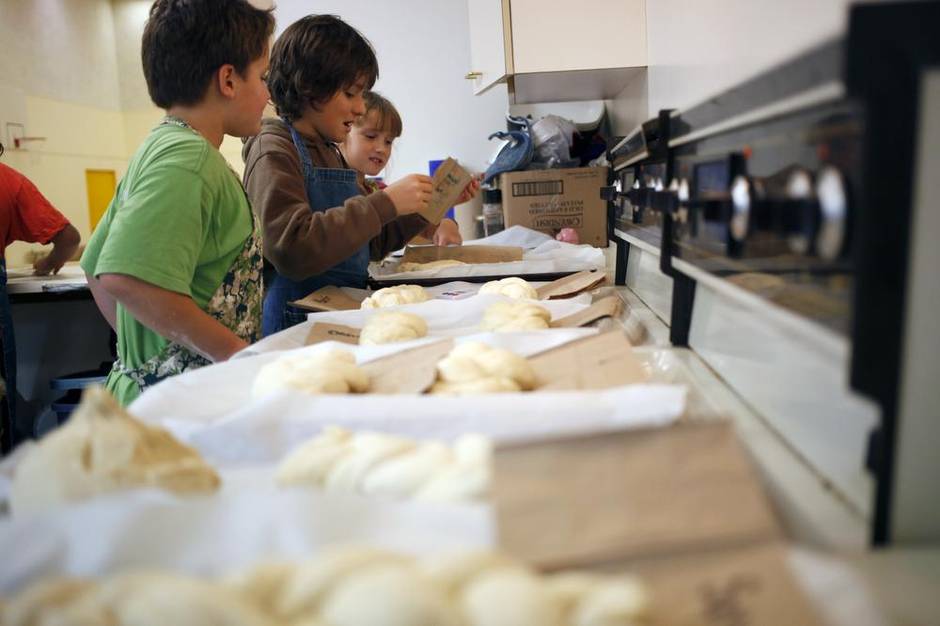 Students label their bread before baking.

Your children have been working on knife skills. They’ve learned how to use the stove, make a snack and prepare soup from scratch. The next step is to learn to make the sauces to build a meal around. Aller-Stead recommends beginning with a tomato sauce. At the Edible School Yard, students learn to make salsa verde (great for a snack) and even a from-scatch curry gravy, fresh toasted spices and all. Aller-Stead says kids can easily learn to roast a basic cut of meat or make stew. 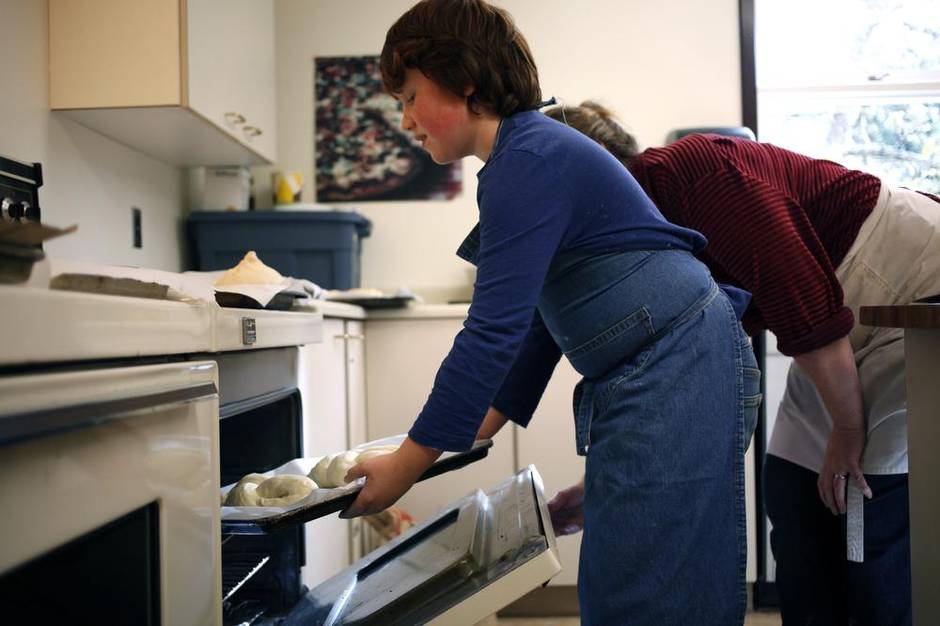 Danny Clark, 10, puts a tray of bread into the oven.

It might sound ambitious, but by next month, your kids could be telling you what’s for dinner. If you’ve taken the time to cover the basics, and to practise, they can soon make a simple meal. Yes, there is a chance that something will go wrong. “You need to let them make mistakes,” Cornforth says. I know it’ll be hard for me to practise what I preach and to stay back, letting the mess take over the kitchen. But the benefits are huge. “What you end up developing in the kids is an imaginative food life,” Aller-Stead says, “so they don’t say ‘I’m hungry’ but instead they say ‘I want fill-in-the-blank.’ And they have the skills to make it.”

Sarah Elton is the author of the book for young people, Starting from Scratch: What You Should Know About Food and Cooking.