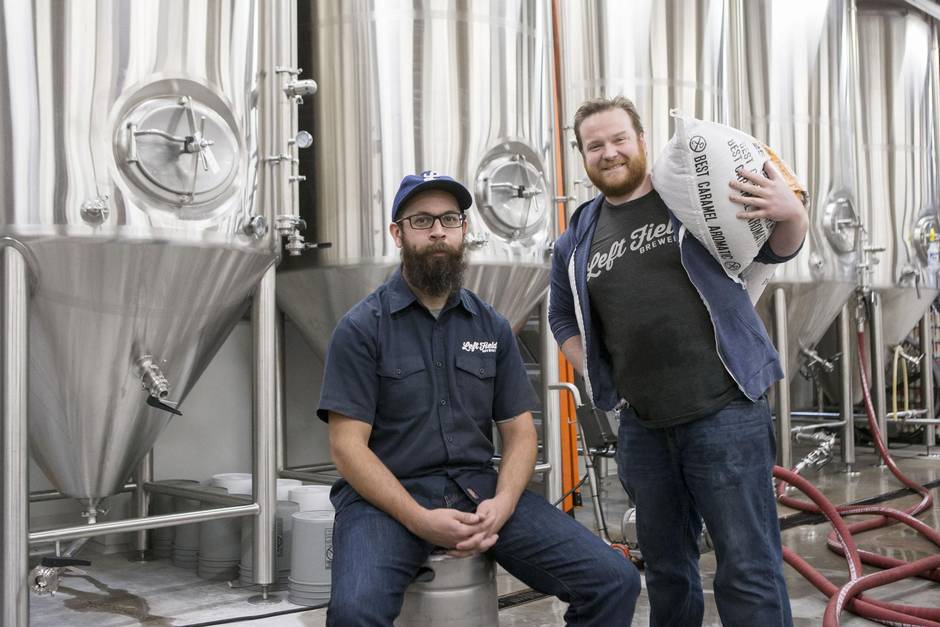 Mark Murphy, left, co-founder and co-owner of Left Field Brewery, is pictured with brewer and classmate from Niagara College Austin Roach on Dec. 29. (Photos by Chris Young for The Globe and Mail)

When Mark Murphy was ready to graduate high school, “beer college” wasn’t among the options his guidance counsellor presented to him. So Murphy, who is from Brampton, Ont., ended up with an accounting degree from Brock University, and worked for a few years in the field.

In 2010, Murphy was in Fort Saskatchewan, Alta., working on an internal audit for Sears Canada. Perhaps not surprisingly, given the tedium of the task, he was distracting himself by surfing the Internet and stumbled on a blog post about the upcoming launch of a new brewing and brewery management program at Niagara College. All too ready to ditch his desk job, Murphy enrolled in the program without first discussing it with his wife, Mandie.

“On paper, I had a good job,” says Murphy, now 33 years old. “I had stability and a career, but I always dreamed of owning my own business.” Not only did beer offer Murphy that possibility, it seemed like the timing might be right to make that business viable. “The beer scene in places like the U.S. was getting big, but that was not yet the case in Ontario, so the college seemed like a good opportunity. Unless I wanted to go to Chicago, or Germany, or Scotland, this was the best way for me to get into the industry.”

Murphy was one of 24 students in the first class of the school’s brewmaster and brewery management operations program. The two-year course covered the science of brewing (the growth rates, metabolism and different strains of yeasts, for starters), marketing skills such as the art of packaging (a cool logo doesn’t help if loose bottle caps allow oxidizing air into the bottles), and, most importantly, hands-on experience managing a working brewery.

“Not coming from a brewing or science background, it was a great program for me because it taught chemistry and biology in addition to everything there is to do with brewing,” Murphy says.

Fast-forward five years and the former accountant is now co-founder and co-owner of Left Field Brewery, a 6,000-square-foot operation in Toronto’s east end that boasts more than 80 bar and restaurant clients, has beer listed in 13 LCBO stores and employs 10 people. “The timing for [Niagara’s] program ended up being just perfect,” says Murphy, who spent the summer in between his school years working for Molson’s pilot brewery at Toronto’s Air Canada Centre. “The launch was aligned with breweries popping up in every city around the province, and they needed skilled brewers.” 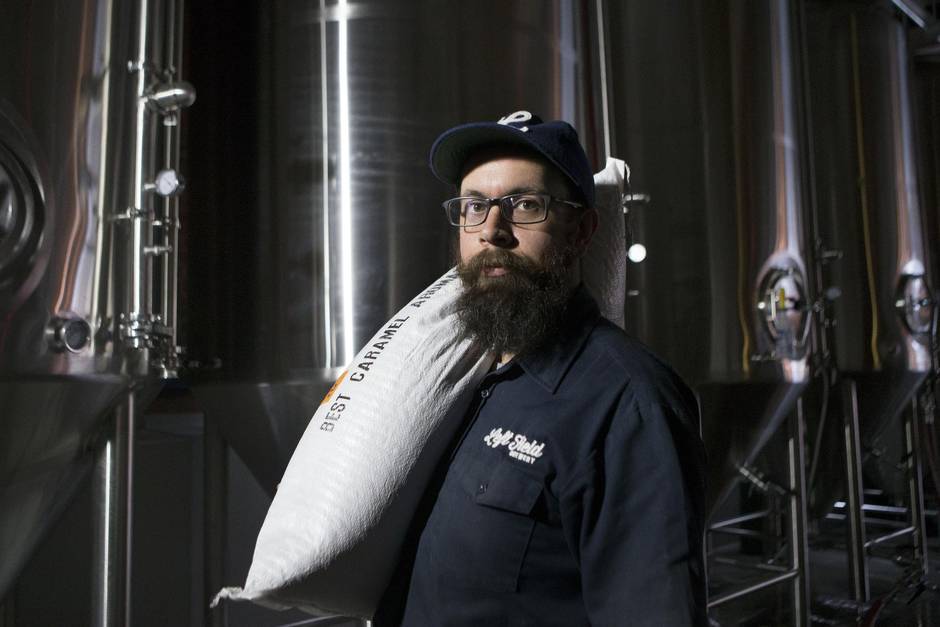 Murphy is just one of many successful graduates from that inaugural class: Classmates Mark Campbell and Mike Pawlick, for example, are now brewers at Lake of Bays Brewery in Baysville, Ont., while alumnus Chris Freeman is the owner and brewmaster at the Collingwood Brewery.

Now in its fifth year, Niagara College’s brewmaster and brewery management operations program was the result of two years of planning by Steve Gill, the college’s general manager, and Jon Downing, whose career in beer spans three decades. Downing has helped open more than 100 breweries, including a pilot brewery for Guinness and Ontario’s very first brew pub at the Atlas Hotel in Welland.

In 2008, Downing learned that Gill had launched Niagara College’s hands-on viticulture program, and approached the college with the idea of starting a similar program for beer. Just as the duo began planning and researching, the industry came calling: Facing a dearth of talented brewmasters in the province, Ontario Craft Brewers (OCB), a trade organization that represents small breweries, approached the college about getting students interested in making beer.

“The OCB actually said, ‘We need you guys to start a program to help build our infrastructure,’” Gill says. “So, as part of our research, we did a survey within the [brewing] industry to see if there was a need for this type of program, and the response was pretty much 100-per-cent ‘Yes. Help us.’”

And so Gill and Downing – plus advisers who included OCB members, local suppliers, brewers and academics – created a program that is the first of its kind in Canada (they have since helped launch an nearly identical program at Olds College in Alberta). The Ontario college features a brewhouse capable of making five-hectolitre (500-litre) batches, with nine vessels ranging in size from five to 10 hectolitres in which beer can ferment.

“[Students] learn about and do the actual kegging, bottling and canning, and they learn about and operate all the equipment and do equipment maintenance,” Gill says. “It’s a very expensive classroom, but when you walk in you can smell beer, you can taste beer – it’s unbelievable.”

The students essentially run a working brewery on campus, including a retail outlet that’s open to the public – proceeds help sustain the program. Beers include Butler’s Bitter, an award-winning English best bitter, as well as First Draft Lager, and a Brewmaster Series that offers a stout, a wheat and an India Pale Ale. There is also a rotating lineup of experimental beers created by students.

Local bars and restaurants are clients, and there’s a 200-member “growler club” of loyal customers who return to the college to fill two-litre bottles with whatever experimental offering is available from the program’s current students.

The program now accepts three 18-student cohorts a year – Many of the students are pursuing a second career or a practical top-up to their university degrees. The increased enrolment corresponds fairly directly with the expanding demand for craft beers and knowledgeable brewers. According to the Liquor Control Board of Ontario’s most recent annual report, craft-beer sales rose a whopping 26.6 per cent in 2013 and 2014, making it the fastest-growing segment within the LCBO’s beer category. The Ontario Beverage Network has 300 breweries on its list of those that are either currently open in the province or in the planning process, up from 100 less than three years ago.

As such, it’s perhaps unsurprising that many students from that first class of 24 have become fairly successful in Ontario’s beer scene. Niagara College grads are in big jobs at Sawdust City Brewery in Gravenhurst, as well as Hamilton’s Nickel Brook Brewery and Northwinds Brewhouse in Collingwood.

“There weren’t enough people to do these jobs and the industry badly needed brewers,” Gill says. “So, the first class of graduates walked right into great jobs.”

Gill isn’t chalking all that success up to just good timing and training. He’s quick to note the passion not only of the first class of graduates, but of subsequent cohorts as well. “I’ve been with the college almost 16 years and, I gotta tell you, these beer students are among some of the most dedicated I’ve seen,” he says. “They are beer geeks, in the best sense of the word.” 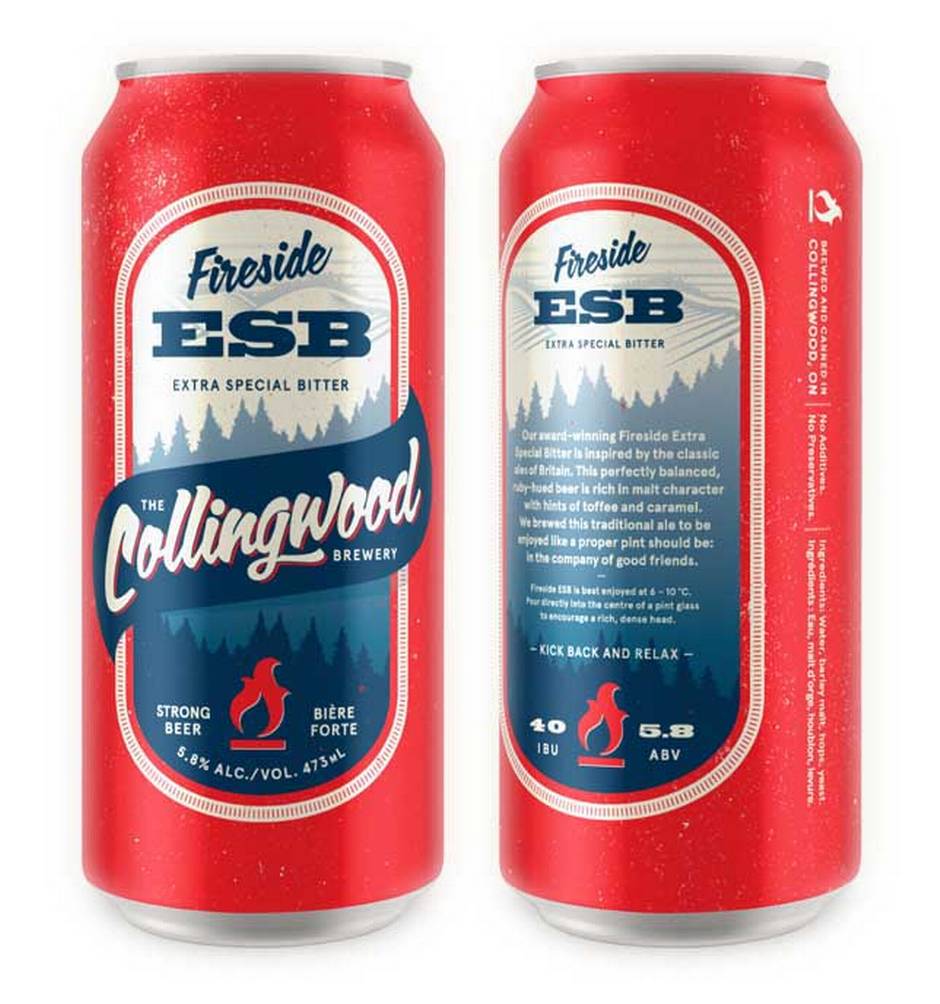 A tribute to British ales, this is a malt-forward, a rich and flavourful beer with just a touch of sweetness.

Find it: Available in tall cans at various retail outlets of the Liquor Control Board of Ontario (LCBO)

Made with Lake of Bays water, this is a slightly cloudy copper ale with floral and citrus aromas and a light-bodied, refreshing, hoppy flavour balanced with a touch of caramel.

Find it: Available seasonally in the brewery Lake of Bays retail store and the Beer Store (the goal is to get this on LCBO shelves this year).

Full-bodied with chocolate and coffee flavours, this beer is infused with both whisky and maple syrup.

The grad: Karen Allen, Brewmaster at Gahan House (and the only female graduate of Niagara’s inaugural class).

Find it: Because Nova Scotia law doesn’t allow brew pubs to package their wares, this one is only found on tap at the brew pub.

A blend of beers aged one to three years in barrels with grape must, Indie’s is a sour red ale that’s both tart and sweet with notes of dark fruit and oak.

Find it: Slated for release in early spring 2016, this one won’t get much farther than Toronto. Look for it at Indie Alehouse and maybe in some lucky local beer bars.

A rich, sweet, biscuity beer, this oatmeal stout is actually made with cocoa, marshmallows, vanilla and graham crackers (5.7% ABV).

Find it: Available soon in tall cans directly from Sawdust’s retail store in Gravenhurst, it’s probable that some of this beer will also make it to better beer bars around the province.