To interior-designer-turned-gourmet-baker Rosie Daykin,the Re-Up BBQ food cart parked in her driveway during her annual summer party last year was the proverbial icing on the cake, its succulent pulled-pork and beef-brisket sandwiches the toppers to a Southern-themed menu featuring homemade hush puppies, baked beans and miniature peach pies.

Daykin had engaged the well-known Vancouver food purveyor (her husband, Paul, had introduced her to its tasty curbside fare) not only because it was on point thematically. By supplying one of the mains for her affair, it cut down her prep time in the kitchen and also lent a certain cool factor to the festivities (food trucks, like Southern cooking, are having a moment in the world of gastronomy).

As that unusual – and ultimately very memorable– element suggests, Daykin's summer gatherings may take place every year, but they're far from predictable. Two years ago, the owner of the wildly popular Butter Baked Goods bakery on the city's west side hosted a weenie roast in her front yard. "It was downscale in a sense, but I wanted to elevate the lowly hot dog by roasting it in a contemporary firepit and having an array of weird and wonderful toppings to choose from," she says.

As successful as that was,though, it was last July's party that perfectly suffused Daykin's personal tastes (including a love of all things Southern) with her casual style of entertaining: "I really enjoy the whole feeling around Southern food; it's completely unpretentious and meant to be shared. I love cooking it and I love eating it."

So, undoubtedly, did her 30-plus guests. Here's how she kept them happy.

For Daykin, planning starts with the menu. As a self-proclaimed "cookbook girl" (the first Butter Baked Goods cookbook comes out next year), she finds inspiration by flipping through her favourites – The Lee Bros. score high marks when it comes to Southern fare – while considering what ingredients are in season, the balance of tastes and textures on a plate and what dishes can be prepared in advance.

"I like to greet my guests," she says, "so I'll walk around with platters of appetizers."

For her Southern shindig, these included endive stuffed with crab as well as hush puppies that she deep-fried in the late afternoon and stored in her kitchen's warming drawer until people started showing up around 7 p.m.

She also set out bowls of cherries and others containing popcorn tossed with Marcona almonds and piment d'Espelette, a chili used in Basque cuisine (her friend found the popcorn recipe on Epicurious.com). Both were accompanied by mint juleps served traditionally in silver cups by a bartender she had hired, a first for her: The barkeep "made a huge difference in terms of my workload and also added a lot – he was a really fun guy that everyone enjoyed interacting with."

In addition to the Re-Up's pulled pork and beef brisket, dinner included corn pudding, a watermelon and avocado salad, baked beans oven-roasted for 10 hours and an heirloom-tomato and blue-cheese salad tossed with an herbes de Provence vinaigrette.

Admittedly, neither herbes de Provence nor piment d'Espelette are Southern, but Daykin feels no need to stress over every ingredient. "When you're younger, you're more uptight about entertaining. But as you get older – and busier –you understand that you're not trying to impress your guests; you're trying to spoil them."

"If the lady who owns the bakery doesn't have good desserts at her party," Daykin quips, "we're in big trouble."

So for larger groups, she serves mini-desserts, allowing guests to sample a wide and eclectic range of bite-size treats.

In light of the Southern theme, this meant coconut cupcakes, Ding Dongs filled with vanilla cream, lattice-top peach pies and bacon-bourbon-pecan brownies (the brownies were such a hit that the Re-Up now sells them, too).

When it comes to the guest list, Daykin says, it's necessary to be a little ruthless, inviting only those you sincerely want to spend a whole evening with. Especially important for a smaller dinner, an interesting mix of people with some connection to one another besides knowing the host will create that sought-after balance.

For an event held in the summer, when a lot of people take vacations and have busier social calendars, Daykin gives everyone three weeks notice.

Rather than sending invitations via e-mail, however, she prefers to actually get on the phone and ring up each person individually (although she will consider e-mail if she's pressed for time).

Normally, guests will congregate around Daykin's outdoor dining table or perch on patio steps and other chairs in the yard. "Everyone finds a spot; I don't worry too much about seating," she says.

What she does think about is presentation. For the southern soiree, her main dishes were laid out on a large circular table covered with a white tablecloth that pooled at the ground. In its centre, she placed a round glass vase filled with an enormous arrangement of frothy Queen Anne's lace, around which were scattered more than 30 Mason jars of various heights; each contained an IKEA tea light, which she lit when the sun went down.

"So many friends said, 'That's a decorating idea I'm going to steal.' And since then I've reused the jars to add some sparkle to a casual dinner I hosted inside the house."

But not just a grocery list. The most important one is what Daykin calls the Execution of Tasks List, which breaks everything down into specific steps, such as Wash lettuce, Toast nuts and Make salad dressing. "As the event grows near and this list gets smaller and smaller, you know you've got it all under control."

For bigger groups, Daykin rents dishes: "It's not as expensive as you might think and it's so easy to just scrape, rinse and drop a plate back into the rental rack."

Daykin's husband Paul is a budding oenophile, so he chooses the wine. He also creates the playlist: "I definitely heard some Lynyrd Skynyrd at our Southern party last July," she recalls.

"Though you don't want guests fighting over the last tomato, you'd be surprised at how far a recipe will go," she says. "If it says it serves eight, remember those eight portions are probably going to be more generous than what your guests are going to take since they have four or five more dishes to take from."

Be practical (and crafty)

The canning jars Daykin used as part of her table's centrepiece were originally supposed to be 40 votive candles, but she quickly realized that would have cost her a fortune. Instead, she found a cheaper and even better-looking solution.

How to smoke ribs, chicken and just about anything else you could want
June 12, 2012 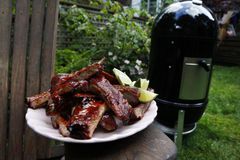 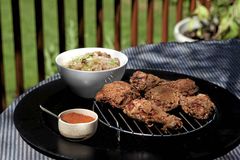 Is this Canadian the Jamie Oliver of Southern cooking?
March 13, 2012 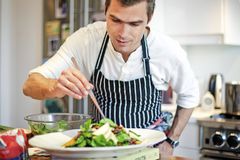