It's hard to believe Jonathan Poon is only 26. The young chef is not only running the kitchen of one of Toronto's buzziest bistros, Chantecler, he has also worked around the world in some of the most avant-garde restaurants. But then again, he's been in the haute cuisine business for nearly a decade.

The Hong Kong-born chef is self-taught and pursued his passion immediately after high school. Getting his first big break at Luce under the Rubino brothers (Guy and Michael), he then went on to work in Hong Kong, Singapore, Australia and finally Demark at Noma, the "best restaurant in the world" (according to Restaurant magazine). Feeling he needed a new challenge, he decided to open Chantecler in Toronto with a former colleague, Jacob Wharton-Shukster, whom he met during a short stint at Jamie Kennedy's Wine Bar.

When and why did you start cooking?

I started in high school, in Grade 10. I grew up in a household where my parents never bought any junk foods, so I enjoyed baking to make myself snacks.

I wanted to bake bread with a lower glycemic index by using whole grains but I still wanted it to taste like white bread. I kind of became obsessed. I would go online and read professional bakers' forums, where they weren't talking about baking like normal people. Everything came down to percentages of lactic acid in the dough.

I was applying for university (engineering programs) at the time. I actually didn't get into any of them because I failed one of my final exams. That's probably because the night before the exam I spent like 16 hours trying to make brioche. I made it over and over again because I wasn't happy with it. I look back now and realize I should have studied for the exam in the downtime that baking bread gives you.

So what did your parents think of your passion for food?

They thought it was kind of odd because I was so into it. Perhaps too much so since I was staying up at night trying to find the best way to make sour dough. When I decided I wanted to cook professionally, they weren't too into that idea. I guess they hoped that I'd do something a little bit more comfortable and not as labour intensive.

What foods do you like to eat now, beyond bread?

I love oysters. I crave them so every day off I try to have them. I just love the ocean flavour. I eat them straight up. Not even lemon juice. Plus, there is something about oysters that is very indulgent and luxurious.

What about sweets? Do you have a favourite one?

I totally don't have a sweet tooth. But I do like ice cream. I don't eat a lot of it but I love making it. It's actually my secret passion. I have a dream to open an ice cream shop. But you need a successful restaurant to fund an ice cream shop in Canada, what with our winters and all.

What ingredients are you experimenting with these days?

Dried seafood, which I use in my Chinese cooking. I'm really interested in exploring this taste. It comes whole, like whole dried oysters or dried shrimps. It has a strong, distinct flavour. It's very savoury. I use it for making sauces, since it gives them that umami flavour. For example, we use it with our pork neck dish.

Are you excited to cook with any particular fall ingredients?

At the end of September we get these pine mushrooms called matsutake mushrooms. They are a delicacy in Asia but we actually grow them in Canada as well. Some people say they taste like cinnamon or nutmeg. The fresh mushrooms have an incredible aroma that is so powerful it can fill the room.

What is your most important cooking tool?

Knives are the obvious answer but I actually find that spoons are incredibly important for cooking. A lot of chefs have a collection of spoons that they use. My collection is pretty plain but in my set there are spoons from Australia that I really love using. It brings back memories.

It depends on my mood but more than likely the greasy spoon. 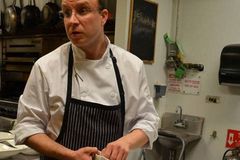 Whatever you do, don't serve this cupcake Momtrepreneur pasta shells
April 30, 2018 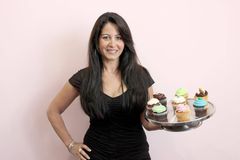 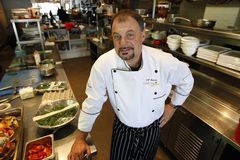