Cheese blintzes, fried to a crispy gold then piled high with sour cream. Plump blueberry varenikyas, boiled like dumplings, ready to burst with sweet purple juice. Clear ruby borscht, ice cold on a hot day, and fried gribenes with crispy onions, dripping in schmaltz and accompanied, maybe, by a slice of challah.

When I was growing up in Edmonton, this is what we ate behind closed doors. It was familiar and comforting, but I knew it was a bit strange. I wasn’t ashamed of it, not exactly, but I wasn’t about to ask my grandmother to come over and cook her Ukraine-inflected specialties for my friends, either. My dad’s favourites, from his childhood before the war in Poland, were a different tune of the same song. Salty herring pickled in a sweet-sour brine or preserved in oil. Thick-cut, darker than dark rye bread buttered and slathered in sour cream or warm beef tongue dipped in sweet hot mustard. I remember coming home from school and being engulfed by the smell of a four-hour brisket braising in the oven, but I pined for Chef Boyardee pizza from a box instead.

Never could I have imaged that, nearly 40 years later, the weird stuff we ate would become fashionable and wind up on some of the most interesting menus in North America.

Jewish food is having a moment or, more accurately, a series of moments that some are even calling a renaissance. Of course certain Jewish foods have been a part of North American life for more than a century (where can you not buy a bagel?) But something new is happening, something that transcends the familiar and the watered-down. 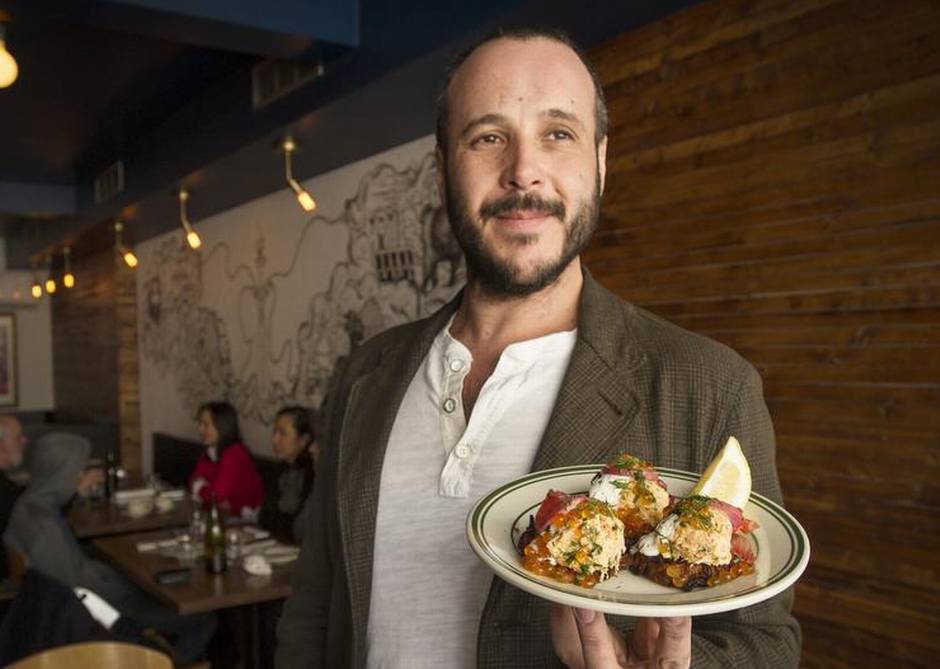 Anthony Rose of Fat Pasha in Toronto. (Photos by Kevin Van Paassen for The Globe and Mail)

The latest wave of Jewish food is strong-smelling and colourful and unapologetically ethnic; it’s a jumbled fusion of deli and European shtetl food, mixed with Sephardic dishes from North Africa and the Middle East.

As a generation of Jewish chefs comes of age and grows more distanced from their immigrant past, they are embracing their history in fresh ways. At the same time, the continental cuisine that once defined elegance is giving way to an appetite for something a bit more authentic.

The result? Formerly peripheral and static, Jewish food now feels alive, vibrant and even chic. My grandmother would be astonished – lowly potato latkes cost $16 and the carrot tzimmes she insisted on making for the holidays has somehow become gastronomy. 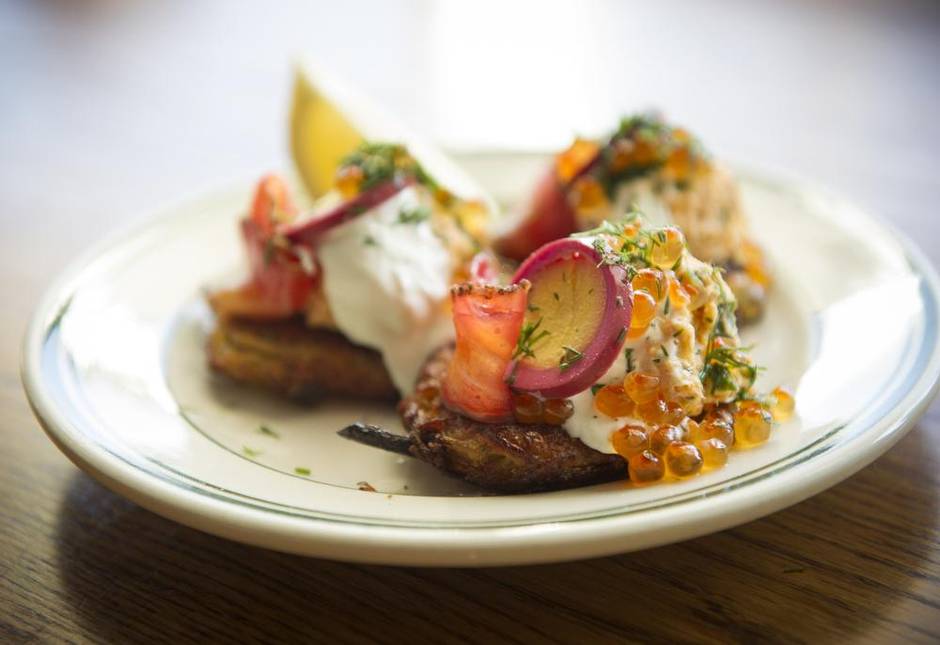 Anthony Rose, chef and owner of Toronto’s Fat Pasha, has become the accidental poster boy for the resurgence of Jewish food in Canada. “When we first came up with the idea of Fat Pasha, it was going to be, very specifically, a Middle Eastern restaurant with Israeli food. But when I was trying to wrap my head around it, I couldn’t because that wasn’t the food I grew up eating,” he says. “I thought about what we ate and I realized, that food is fantastic.” As an Ashkenazi Jew, Rose’s childhood was infused with Eastern European flavours similar to the ones I remember, rather than the Sephardic tastes found in Israel and its neighbouring countries. In the end his menu is a mashup – falafel and fattoush alongside chopped liver and, yes, tzimmes, with flamboyant dashes of truffle and caviar to make sure you know whose dishes you’re eating.

Rose took a circuitous path back to his roots. His early jobs were at contemporary restaurants such as Washington Park in New York and the Drake in Toronto, and his other Toronto businesses are a diner and a barbecue joint. Not so surprising, says food historian and scholar Lara Rabinovitch. “… about 10 years ago, with the birth of magazines like Heeb, being Jewish became not something to be ashamed of as in previous generations, but some kind of hipster badge of honour. Even more recently that trend has trickled down into the food world and suddenly knishes are all the rage,” says Rabinovitch, who taught at NYU and now writes about food and culture out of Los Angeles. It’s part of a larger movement in ethnic cuisine, she adds, toward modernizing and upscaling. “We see [this] with restaurants like Momofuku, Mission Chinese or Torrisi Italian Specialities.” 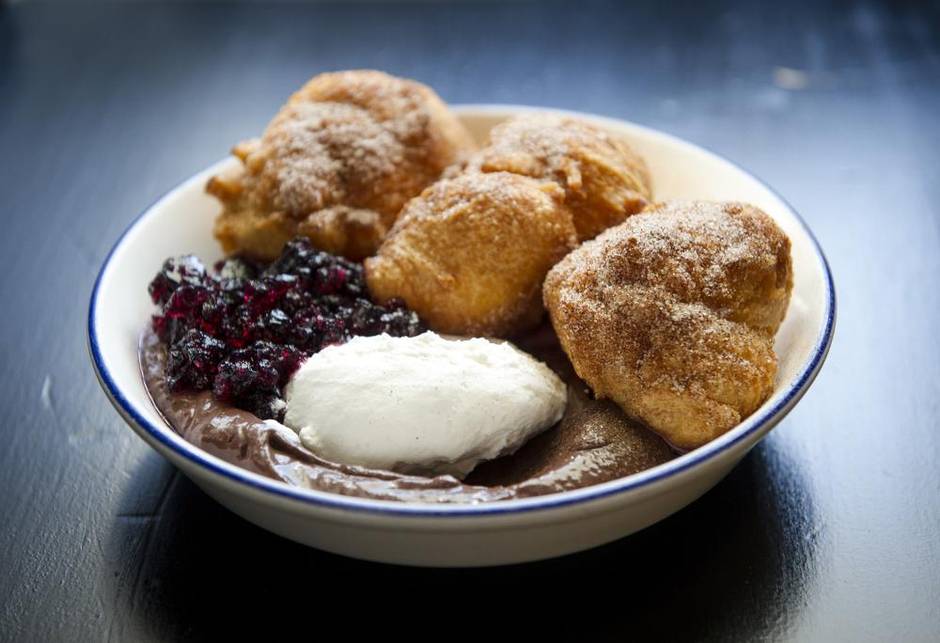 Noah Bernamoff thinks a lot about where he fits within this cultural landscape. The Montrealer-turned-New Yorker who opened Mile End deli in Brooklyn and Black Seed bagel on the Lower East Side, seeks to both honour and update tradition in a similar way to what David Chang (Momofuku) and Rich Torrisi (Torrisi Italian Specialties) have done.

“We do serve deli but we’ve permitted ourselves to be creative,” he says. “We have a lamb merguez from North Africa, we do shawarma, even a French Canadian tourtière made with brisket and tongue.” The cultural references will speak to people in various ways, notes Bernamoff, but what’s most important is the quality of the entire experience. “We serve more non-Jews than Jews, so the food has to stand on its own. And we’re not doing Jewish nostalgia. It’s a modern sensibility. Instead of klezmer, people hear their favourite bands.” 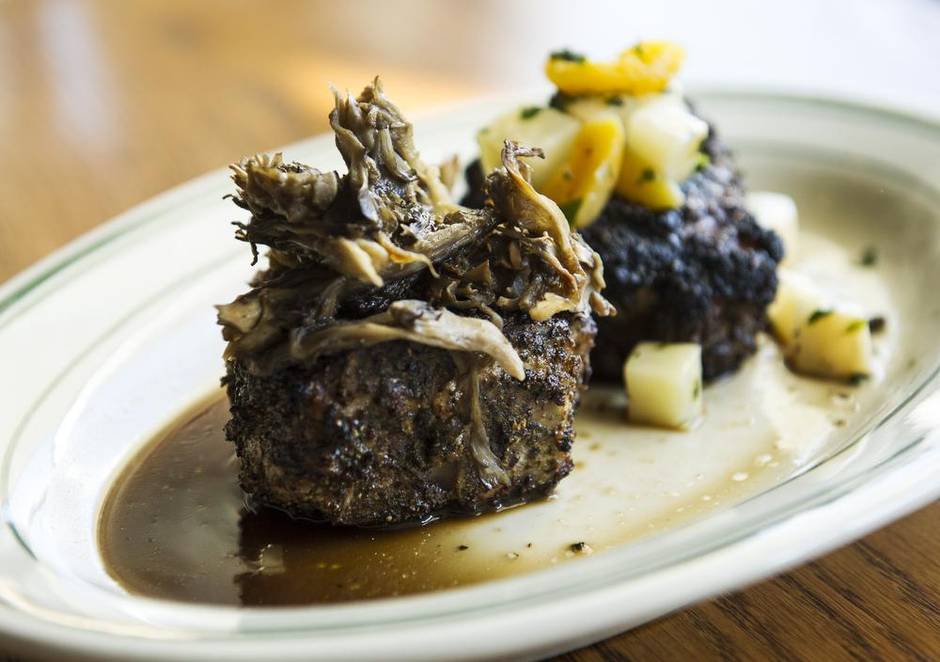 The shift is broader than the restaurant scene. Cookbooks such as Modern Jewish Cooking (Leah Koenig) and The Covenant Kitchen (Jeff and Jodie Morgan), both coming out this spring, seek to reframe and refresh the Jewish cooking experience at home, as well. “There’s a strong yearning among younger people – folks in their 20s to 40s, myself included – to dig deeply into their heritage as a way of forming their identities,” says Koenig. “We are fortunate enough to have the space and freedom to reclaim the dishes, moving beyond tradition and putting our own spin on them.”

There is something amazingly satisfying about coming back to the childhood flavours you took for granted – or didn’t even like – from an empowered, adult perspective. With knee-jerk rebellion out of the way, everything looks more interesting and tastes better. “I saw colleagues leave places like Boulud for Torrisi, to cook the food of their upbringing,” says Bernamoff. “I wanted Jewish food to be like that.” So in the end, whether the food is Jewish or Korean or Italian doesn’t really matter. “The idea of continental cooking is dying and I’m not sorry,” Bernamoff continues. “What we’re all doing is finding meaning. This is food but it’s also a narrative.”