Owning a restaurant – the gruelling hours, the pressure-cooker environment, the expectations of customers – isn't easy. You might think that adding in a marital relationship, and the dynamics of juggling multiple hats on the home and work front, would make matters worse. But the couples interviewed for this story, who have owned, operated and manned the stoves together, say they've had fulfilling personal lives, too. Yes, this kind of intimacy can be intense, but it's all worth it to have a partner with whom one can share the sheer joy of loving and preparing food.

On the West Coast, Kaeli Robinsong and her husband Jason Sussman own a burgeoning taco empire, Tacofino, which now has four trucks (one in Tofino, B.C., three in Vancouver) and three sit-down restaurants (one in Victoria and soon-to-be-three in Vancouver). "Running a business with your spouse? I can't say that I'd recommend it," laughs Robinsong, who is also a mother of two kids under 3. "But there are some benefits. Like getting to spend lots of time together."

The couple opened their first taco truck near the beach in Tofino, on Vancouver Island, in June of 2009, where they were living in part because Jason, 45, is a big surfer. The second came in 2011, a year before their first sit-down spot. Then, well, the rest.

Needless to say, it's been busy (in the last six months, they also built a house in Tofino). Robinsong says the key to keeping all the balls in the air is to share the parenting equally. "And to try to do as much business as we can from the beach," she adds. "Our daughter is in daycare two days a week and Nature Kids [a nature education program] once a week. We take turns for bedtime, and most of our meals are potential new menu items. So our home kitchen is our Tacofino test kitchen most nights." The thing is, Robinsong and Sussman say co-owning the business may have kept them sane.

"Maybe the secret is to keep really busy, that way there isn't that much time to reflect on your relationship!" says Robinsong, 33.

"And most of your fights end up being work-related, which has no bearing on the romantic relationship."

To most of us, that sounds insane. But other restaurant-owning couples who have survived this risky, exhausting and yet exhilarating business say their togetherness has been a godsend, not a detriment.

"No one is making us do the intricacy of the food that we do. We talk in the kitchen, sometimes, and say, we could take a step back," says Tobey Nemeth, 40, who owns Edulis in Toronto with her husband, Michael Caballo, 35.

Right now, their menu includes the year's first blonde morels, served with "apple sotto" (apples cut in fine brunoise, dehydrated and cooked out like rice in a risotto), served with smoked butter and hazelnut milk. "But we believe deeply that every day we should come in and be better than the day before. We run out of gas sometimes. But when we are feeling those moments, all it takes is a guest coming in and sending us a note that they loved the food, and the beauty of it, it just makes us cry."

In Halifax, Laura MacDonald and Andrew Connell, both 29, opened the craft-beer pub Stillwell in 2013, along with MacDonald's brother and a friend. It's a hot spot in the city, in part because of the 12 taps serving mostly local craft beer, and also due to a small-plates menu that includes delicacies like Black Point oysters and a crowd-pleasing Buffalo fried-chicken platter, that comes with kimchi ranch dressing, pepper-infused honey, and dill pickles to cool the palate.

"We all just have general roles that we fulfill. None of us is looking to avoid any of the chores," says MacDonald about the secret to their success. "I can't see myself stopping for a few years, at least five. I like being here. If we're away and I forget a regular customer's name, I feel bad."

Connell describes the lifestyle as "24/7," though MacDonald is more specific. "We typically come in from noon, open at 4, do deliveries, and go home at 8 or 9," she says. "Weekend hours are much longer. We try to balance that, but there are times we get out at 4 in the morning."

Younger restaurant partners would do well to learn from Jennifer Warren-Part, 58, and Charlie Part, 59, veterans of the scene. They own Les Fougères, a countryside restaurant in Chelsea, Que., just outside Ottawa, which opened in 1993 and specializes in sustainable, seasonal and regional cuisine. The couple grow many of their own vegetables and herbs, and also operate an artisanal food shop, with specialties such as wild-mushroom and tarragon soup and Charlie's famous cassoulet. They've been together since 1984, raised two children who are now 27 and 28, and still manage to like each other.

The "tricky years" were when the kids were young, says Charlie. "We were living above the restaurant. Balancing it was tough for everyone. We were always in a rush or busy." But making a living out of a restaurant is difficult – and incredibly rewarding. You are always doing the job of one to three people at the same time, he adds. "But our passion for what we do is still here."

In Tofino, Robinsong says much the same. "Our three-year-old's favourite pastime is to make a 'taco stand' at the beach, and sell driftwood topped with sand and seaweed, quoting us, saying, 'One's a snack. Two's a meal,'" she says with a laugh. "When you can find the balance, good things happen. We drive each other nuts, but at the end of most days, we fall into bed pretty stoked on life." 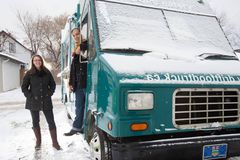 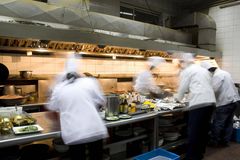 Full stop on the revolution: Why Toronto’s food truck scene keeps falling 50 metres short
April 17, 2015
Follow us on Twitter @globefoodwine Opens in a new window
Report an error Editorial code of conduct
Due to technical reasons, we have temporarily removed commenting from our articles. We hope to have this fixed soon. Thank you for your patience. If you are looking to give feedback on our new site, please send it along to feedback@globeandmail.com. If you want to write a letter to the editor, please forward to letters@globeandmail.com.
Comments