Blindfolded, we creep out of the stretch limo with awkward trepidation. Our guides talk us through the transition between the congested highway drive and its unseen destination, leading us down steps and through passages that we can only imagine in our helpless, hopeful state of sensory deprivation.

Seven of us have accepted a dinner invitation that promised to transform our nightly meal into a one-of-a-kind cultural event. And so we have submitted to art at its most domineering – whisked away from a downtown hotel, ordered to hand over our mobiles and put on headphones that play neutralizing brain-massage music, and finally those scary blindfolds – as if the creative impulse only works its wonders on an audience that is totally passive and yielding. 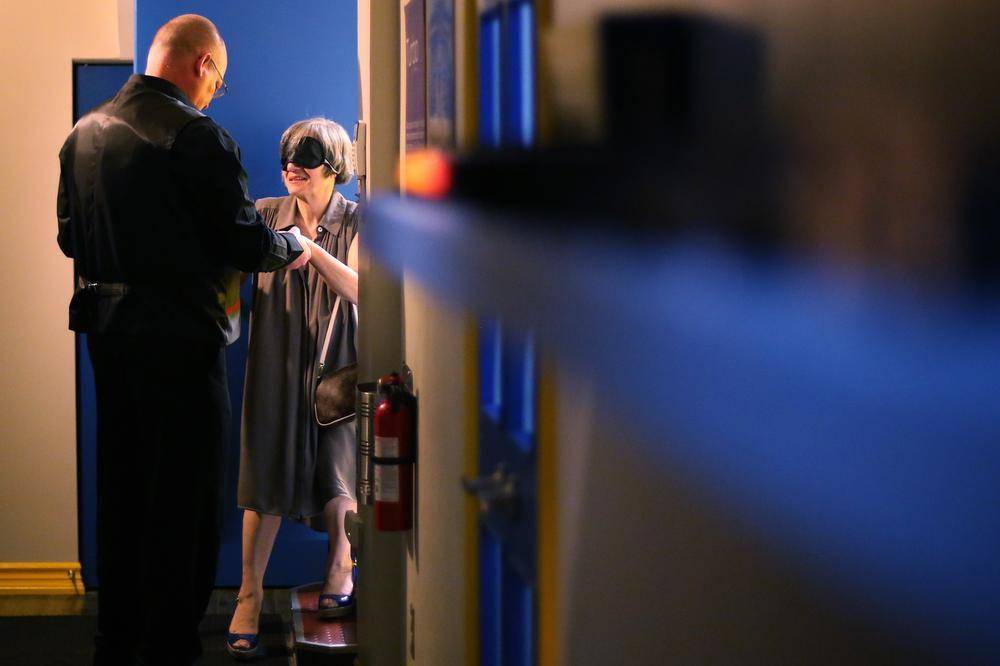 Photos by Michelle Siu for The Globe and Mail

But when the blindfolds are yanked away, all the conceptual posturings of the aesthetic control-freaks suddenly seem like an inside joke. Having set out from Toronto in an atmosphere of mystery, we have ended up an hour later in a suburban rec room – albeit a displaced suburbia tinged with a soupçon of insanity.

For there before us is what appears to be a 1970s-vintage railway car, and a serving staff who hurry us to our time-warped seats – cramped coach-class bum-holders squeezed between a tiny table better suited to a game of euchre or a rye and ginger than the elaborate dining-car experience we are about to recreate.

This is the weirdly mind-altering departure point for The Lost Train, an “imaginary journey” created for Toronto’s Luminato festival by composer and scratch-DJ Kid Koala in collaboration with Joe Beef’s chef Fred Morin and Jason Shron of Rapido Inc. model-train company – whose basement has been appropriated in our quest for the sensations of a railway past reimagined into modern art. Described as Luminato’s “secret gem” by the festival’s artistic director Jorn Weisbrodt (only 96 seats were made available over 12 sittings), the $225 event deliberately cloaked itself in an atmosphere of mystery to help its patrons tap into a more atavistic relationship with trains – “the industrial version of a mother’s womb” in Weisbrodt’s words.

Nothing can ruin a meal more than the idea that it is merely the means to a higher end. Charity galas are bad enough with their tin-eared speeches and rah-rah videos that treat mastication as an assembly-line moment in the manufacture of a good cause. But the superior beings of the art world are even worse offenders when they try to overload the simple ritual of dinner with ponderous theory and moralizing pretension and egotistical performance masked as art.

Anyone who pays attention to their culinary surroundings already knows that there is no shortage of inspired creativity in the making of good food – the metamorphosis of a pig into a display case of charcuterie or a basket of peppers into a cantina-filling collection of preserves and pickles rivals the Holy Eucharist in transformative power. And the theatricality comes ready-made – you don’t need stagey artifice when the smells and taste of the food can completely captivate a waiting audience. 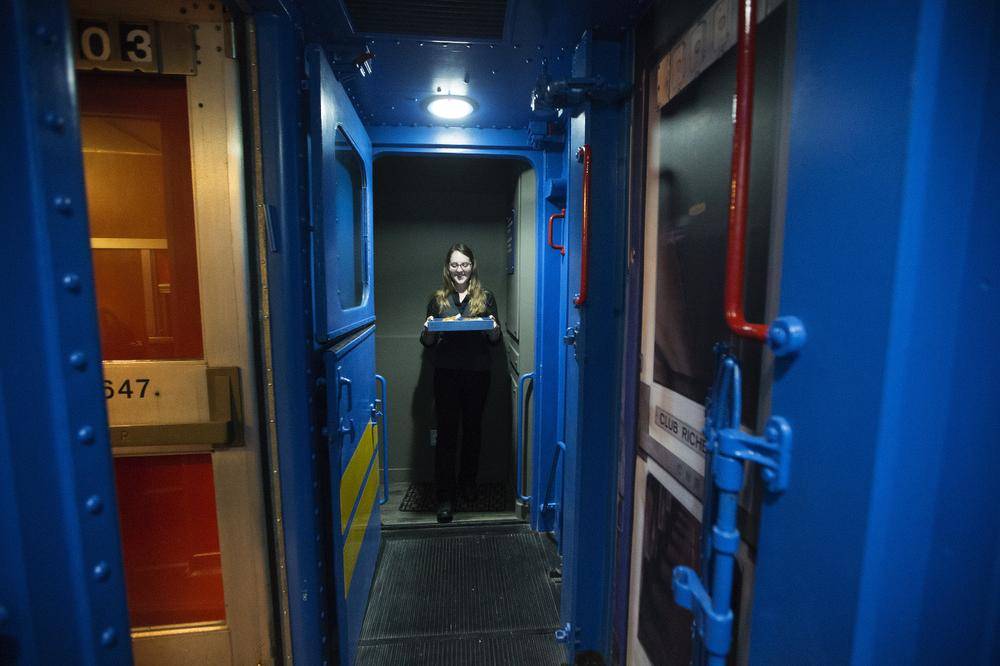 Fortunately, The Lost Train understands food, and the people who like to eat it. Too much art, and too many celebrated restaurant meals for that matter, detach the audience from the performer. Wrapped up in this compact train car, talking non-stop with our creative hosts, we can’t help but take control of our excursion. There is no script, no predetermined code of behaviour – what makes The Lost Train so memorable a piece of theatre is that everyone involved has trusted their art to speak freely for itself.

We’re nowhere near the moralizing realm of Jana Sterbak and her desiccating flesh dress created in 1987 that in the words of one critic “concretizes the self-consuming anorexic body.” And there is none of the dictatorial style-sense of the Futurist Filippo Tommaso Marinetti whose modernist take on aerodynamic food had diners being buffeted by a propeller-like fan and anointed with carnation-scented cologne while they nibbled fennel and simultaneously stroked sandpaper or silk – an experience hugely entertaining to read about from a safe distance, but highly annoying up close as the rule-bound vision of a fascist foodie in Mussolini’s Italy.

The Lost Train adheres to a much more liberating and convivial version of food culture: It feels more like a fun dinner than a world premiere. If only more art could be so visceral and immediate. The first courses arrive from an unseen kitchen, sliced beets smoked in a pastrami style as a tribute to the Montreal smoked meat of Fred Morin’s train memories and a small jam jar containing a barely poached egg afloat in morel-infused cream sauce. Could the plutocrats and grandees who crossed the world to travel the Orient Express really have dined better than this?

Quietly, even self-effacingly, Kid Koala stands in the train car’s narrow passageway, examining his vinyl platters before offering us Gladys Knight’s Midnight Train to Georgia, the gravelly voice of Johnny Cash, Sheena Easton’s Morning Train. The unending darkness of the Canadian wilderness or possibly the unknown emptiness of a suburban Toronto basement floats past our panoramic window as we open an individualized caviar tin of sturgeon and salmon eggs on top of cold-smoked salmon and a buckwheat blini moistened with dill butter – the kitchen’s now clearly gone all Trans-Siberian Railway on us.

Kid Koala, a.k.a. Eric San, tells us how he got his nom de turntable – his mother was a dedicated bulk-buyer of Koala Springs bottled water, and his bedroom studio was so saturated with empties that his friends joshingly nicknamed him Koala Kid.

His DJ lifestyle in Montreal synchronized with Fred Morin’s night-owl chef schedule, and their common passion for trains proved a natural fit with Luminato’s love of off-centred cultural projects – particularly when the incomparably enthusiastic Shron was brought on board.

“Hey, Mr. Koala,” interrupts a diner between bites of a crisply fried vegetable “drumstick” that’s a takeoff on classic chicken finger-food. “Which version of Mystery Train is that?”

“Canada’s own Neil Young,” answers the DJ on our no-longer mysterious train. 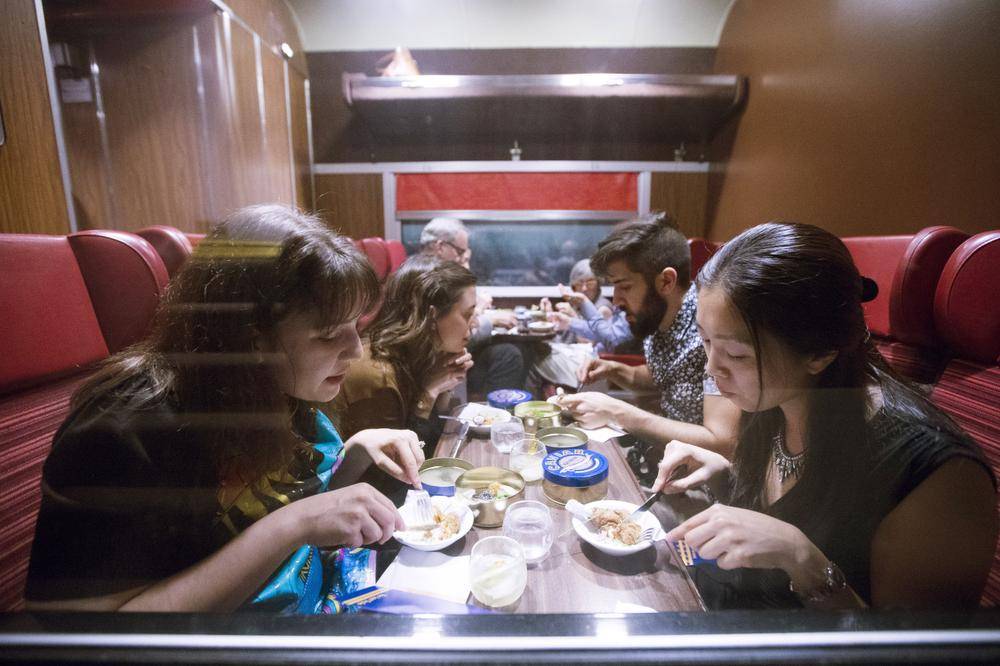 There’s an easiness here – good, true railway chatter, not the sort of ponderous monologuing you’d expect at a curated gallery foodfest. Jammed together in an old Canadian Pacific car that feels like it’s in a hurry to get nowhere fast, strangers gab like passengers who know they’ll become pals somewhere between Toronto’s Union Station and Montreal’s Gare Centrale.

A tart pink rhubarb-and-verbena version of Jell-O arrives to enhance the good-old-days feel, and then comes a honeyed financière cake enclosing salty carrot curd, quite unlike anything ever served on the Toronto-Montreal run – though Morin has enclosed it in crackly plastic wrapping to achieve a mass-market period feel.

Just as we’re praising the patisserie’s quiet art and comparing it to a similar Armenian cake that one member of our happy company describes in loving detail from her family’s own history of migrations, the chef emerges from his hidden galley. Morin talks about old modes of travel and the lost menus from slower times that still inspire him to rethink the role of the past in the present. Many star chefs are remorselessly future-facing and have become indistinguishable from conceptual artists in their desire to control the performance of a dinner and remake normal foods into unrecognizable innovations that disdain their humble origins.

But Morin, perfectly fitting the clickety-clack train sounds that San is now playing, prefers to look back. “It’s a deep nostalgia,” he says. “You have to find your sources somewhere – food can’t always come out of thin air.”

We may have lost the kind of workaday trains that catered to the body as well as the soul. But these recovered memories and reinvented longings have a power and a pleasure often missing from more self-conscious, thin-air ideas of food and art. And before the beckoning limo returns us to drab reality, let’s not forget the monomaniacal madness of it all – the impromptu dining car in the basement that turns an imaginary journey into a trip to somewhere strange and wonderful.