The colour can be yellow or chartreuse or pale green flecked with gold. It might have a nose of artichokes or fresh-cut grass or tomato leaves. The flavour may be fruity or herbaceous, with spicy notes or peppery undertones or a long, balanced finish. No, we're not talking wine, but, rather, olive oil. Elena Lepori, an expert in the substance, is tutoring me on the proper way to experience the good stuff, specifically single-estate extra-virgin olive oil from Italy, her specialty.

Dark haired and petite, Lepori is the owner of Toronto-based Lugano Fine Foods and a trained olive-oil sommelier. She has an expressive, lively way of speaking and an accent that's hard to place. In fact, Lepori is the child of a French mother and a Swiss-Italian father. She was born and raised in the Swiss city for which her importing company is named, eight kilometres from the Italian border. When she came to Canada as a young bride about 40 years ago, she let her husband Stefano's career as an architect take precedence, while she focused on learning English and raising their two children. It wasn't until a pivotal trip to Europe in 2006 that her new passion and career took root.

"It all started out of a beautiful encounter I made in Sicily," she says with a smile. "I was at a food fair and I noticed wonderful people from a farm called Mandranova." Although there were lots of other booths to visit and oils to taste, Lepori kept going back to that one, where she got to chatting with the owners. Before long, she had made arrangements to return to Sicily and stay at the Mandranova olive farm for a month-long vacation. "It was there that I started to develop this incredible taste for pungent olive oil."

Back in Toronto, Lepori had such a hard time satisfying her hankering for top-quality olive juice that she decided she would have to start importing it herself. With her friends at Mandranova on board and Stefano by her side, she started knocking on doors. "Pusateri's [the Toronto gourmet-food shop] made a small order, so I brought in my first palette – around 200 bottles."

The following year, Lepori returned to Sicily to look for additional producers, learning more and more about Italy's complex olive-oil industry as she went along. "Sicily alone has more than 60 different types of olive cultivars; there are close to 500 in all of Italy," she says. On top of that, there were the government's strict designations of authenticity to figure out as well as variations in producers' methods of harvesting, extraction, storage and more. When self-education and on-the-job training weren't enough, Lepori enrolled in olive-oil school at the Organizzazione Nazionale Assaggiatori Olio di Oliva (a.k.a. the National Organization of Olive Oil Tasters) in Imperia, Italy. "I did a 10-day sommelier course, but I don't have the audacity to say I know everything," she says. As with wine, there are many levels of knowledge and constant opportunities to learn.

Today, Lepori works with 21 single-estate olive-oil producers as well as a select group of artisans who make other products such as pasta and balsamic vinegar. The business is growing – consumers here can find her products at fine-food emporiums in Ontario, British Columbia, Alberta and soon maybe Quebec – but she still takes the time to visit each farm or producer in situ before deciding whether to take it on.

Its rapid growth notwithstanding, the operation has a personal, sincere quality, which Lepori recognizes as an extension of her Swiss values. "I grew up with very strict principles," she explains. "In Switzerland, we like things that are ethical and true. I want to bring a product that is clear, honest and traceable. I want to know the people who are behind it. I put this philosophy behind my entire company."

Before you even open the bottle, a look at the label will tell you the type of olive (cultivar) the oil is made from, when it was made, when it will expire and whether it is a mono-cultivar oil or a blend of a few types. "Some cultivars stand on their own," Lepori says. "For example, Nocellara del Belice is like a cabernet wine." However, a well-made blend can be just as delicious, she stresses, pointing to certain Tuscan and Umbrian examples that mix a few cultivars with great success.

When it's time to taste, pour a little oil into a glass. (A good store or producer will let you do this.) You will want to take a big whiff and note its aroma, but avoid jumping to conclusions about colour and clarity: The type of olive, maturity at harvest, method of processing and level of filtration will all affect colour without necessarily affecting quality.

Finally, taste the oil by slurping in into your mouth along with a lot of air. Top-notch oils will be pungent and often even bitter – this is due to high levels of the antioxidant polyphenol and is a sign of quality. Other good flavours to look for are fruitiness, pepperiness, grassiness and nuttiness, but mostly just taste for flavours that appeal to you, keeping in mind that you'll generally be enjoying your oil on food, not all by itself. 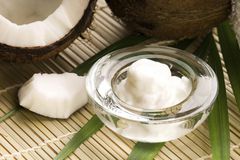 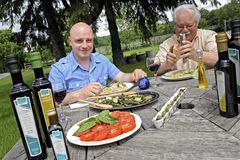