David Chang is one of the most talked about chefs in America at the moment. His Momofuku restaurants and Mà Pêche in New York draw food lovers from all over the world. Time magazine named him one of the 100 most influential people in America last year.

So it's understandable why Toronto food enthusiasts reacted with awe - and perhaps a twinge of skepticism - at the news of his intention to open two restaurants in the Canadian city. (One fan on the online forum Chowhound summed up the sentiment: "Squeeeeeeeeeeeeeeeee!!!")

Word of his Toronto plans began with a cryptic tweet last week. "Chris bosh south beach sucks…hello southern ontario > Phaneuf, Bargnani & Bautista > late late 2012ish? via westbank>shangri-la," he wrote, which was soon followed by confirmation from his press officer that Mr. Chang will open two restaurants next to Toronto's Shangri-La Hotel, which is slated to open in 2012. One will be modelled after his famous Momofuku Noodle Bar and a second is to be called Momofuku Daisho.

Why is a megastar New York chef like Mr. Chang setting up an outpost here in Canada? The Globe and Mail asked the chef himself.

Your Twitter message threw everyone for a loop. Do you always choose your locations based on their professional athletes?

I'm a big sports fan. Because of some of the Canadian cooks I've worked with - they're huge Maple Leafs fans. And I love basketball and [Jose]Bautista had that crazy year last year. So I just thought it was funny.

Running a business anywhere isn't easy. I'm not saying that it's easy in Toronto. It just seems to be more welcoming and there's space to do things, where[as]in New York, there isn't always. And there's already a rich, vibrant restaurant scene and great young chefs and an older generation of chefs that have paved the way for a lot of people. I just am very respectful of that. We don't want to screw anything over. We want to tread lightly. We just want to go in there quietly - if that's possible.

Montreal and Vancouver, which pride themselves as food cities, might feel a bit snubbed.

It just was closer to us. It may seem ridiculous because we're opening in Sydney, Australia, this year, but that's a 30-seat restaurant. We're trying to create cultures and we're not trying to cookie-cutter stuff out. Montreal? I don't speak French. And Vancouver's just too far away, at least for now. I mean, who knows? I had never been to Vancouver until earlier this year, and I'm like, "This is an amazing city."

The idea that you're opening with a major hotel chain doesn't seem to match your reputation as a renegade, do-it-your-own-way kind of chef.

Well, they rented the space and we're partners with them. But we wanted to try to have the resources to do something great, and I think that was provided to us.

The same week you put out your tweet, New York chef Daniel Boulud announced he is closing his two Vancouver restaurants. Some industry observers have suggested part of his failure was that his restaurants felt flown-in. Will you be hiring much local talent?

Yeah. We're going to try and bring two chefs up there, but we're going to hire local talent, and we want to create a menu and do things that are unique to Toronto.

You can't just go in assuming that people are going to come. We have to think we're the underdog. If Daniel can fail, anyone can fail.

New York chef David Chang to open two Momofuku restaurants in Toronto
May 3, 2018
Hotels bring back the heat to their dining rooms
April 30, 2018 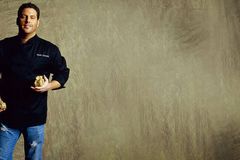