With all due respect to lamb, pork, bison, horse, chicken, elk, caribou, venison, ostrich or rabbit, beef is still my favourite meat. I wouldn't argue with any chef who wants to claim the pig as the most versatile animal. Even before you start listing the multitude of cured pork products, bacon makes it the people's champ.

But if you're going to take a well-raised, fresh piece of meat, cook it in an uncomplicated way and season it only with salt, I don't think you can beat beef for its complex, earthy depth of flavour.

At least twice a week, when I step into the butcher shop to buy bacon, I miss beef like I miss Saturday-morning cartoons.

Sadly, though, I just can't afford beef any more.

In the last few years, market forces have aided my ongoing effort to eat more vegetables and less meat as the cost of beef on my dinner plate rose from that of a premium ingredient to that of a luxury good.

Five years ago, a $16.99 a pound rib-eye steak – seared to a crisp on the outside, cooked to a pink medium-rare on the inside – was an indulgence, a reward on gold-star Fridays when I deserved a treat. More consistent in my meal planning were the tougher cuts – bavette, flank, skirt – with maybe a little more chew, but no less flavour, and good value at $6.99 a pound.

At first, the rising cost was too gradual to notice. Like the frog who doesn't know he's in a pot of water slowly coming to a boil (has anyone actually seen this? And is there any chance that frog meat is cheaper than beef?), I kept buying and eating bavette. I expected the price to go down eventually, but when it reached $14.99 a pound I gave up.

I could pay less at a supermarket, rather than a fancy butcher shop. But I trust the ethics of my butcher's sourcing and am faithful to Sanagan's, in Toronto's Kensington Market. So, rather than buying cheaper beef, my solution has been to eat less of it: The tofu shop down the street makes fresh tofu daily, selling six blocks for $2.50.

But I was curious to know why beef prices had jumped, if it had happened across the board, and if it was ever going back down.

"Two or three summers ago there was a significant drought," says Ryan Donovan, who buys whole cows, both for his restaurant Richmond Station, and beef distribution business West Side Beef Co.

"The drought made it hard for farmers to grow grass, which meant it was hard to have hay. Hay was crazy expensive on the open market. So farmers across North America ended up reducing their populations. They didn't have calves that year or they sold their animals below market weight, instead of feeding them," he says.

Loblaw Cos. Ltd. referred me to a spokesperson for the Retail Council of Canada, who confirmed that, yes, everyone's beef prices shot up dramatically, 31 per cent in two years. According to Statistics Canada, the price of a rib roast went from $23.74 a kilogram in 2012 to $31.24 in 2014.

As the supply was going down, international demand was going up, thanks to a rising middle class in India, Russia and China. Their appetite for beef drove up the price of Canadian beef even further.

Some small producers, such as MacKillop Highlands in High River, Alta., were able to survive the market fluctuation, partly by not selling to the international market. Without chasing international buyers – who were willing to pay more temporarily – small cattle ranchers avoided losing their local customers when prices jumped.

"Our prices stay consistent because we sell whole quarters of beef," says cattle farmer Renée MacKillop, "preventing waste or the added cost of marketing lesser cuts separately. Our direct-marketing approach removes us from the industrial food system where market power tends to be concentrated."

All that accounts for why I've forgotten what rib-eye even tastes like. But still, as drastic as a 31 per cent price jump is, it doesn't account for the 100 per cent increased cost of my precious bavette.

Going up the supply chain to one of the wholesalers that sells beef to my butcher solves the mystery. "Tenderloins, ribs and strip loins could only go up so much," says Greg Nolan, livestock development director for Artisan Farms. "So, to find more value in the carcasses, the abattoirs and the meat professionals put price pressure on the shoulder cuts, the bavettes, the flanks, flatirons, clod, blade – anywhere the market could bear it."

So the joke is on me, and everyone like me, who thought they were clever, learning to cook and enjoy the offcuts instead of spending on the prime cuts.

My butcher, Peter Sanagan, says that when beef sales fell as a result of rising prices, the abattoirs' strategy kept steak prices below the psychological threshold of what people will pay.

"Strip loin, if you go from $15 to $20, all of a sudden, it makes it less approachable," he says. In order to subsidize that, my dinner had to become unaffordable. "The bavettes and the skirt steak, flank steak, oxtail, beef tongue and all that stuff went up by 100 per cent, if not more. Oxtail, I have to charge $10 a pound. It's ridiculous," Sanagan says.

It's not temporary either. When prices were peaking at the butcher shop, I kept thinking that I'd ride it out. Nolan says that's not happening.

"There is zero per cent chance of your bavette steak price going down," he says. "There's too much external export pressure on pricing. Because if you're not going to buy it, there's someone in China or Russia who will." 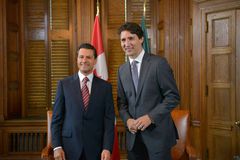