Look beyond its conflict, and you'll soon find that Jerusalem's clash of cultures – Arab and Jew, Christian and Muslim, religious zealots and secular technocrats – has created a city brimming with good food. Here, the legacy of a global Jewish Diaspora, from Polish bubbies and Iraqi bakers to South African chefs, smacks up against the traditional, terroir-based Palestinian kitchen, itself influenced by the cuisines of Jordan, Syria, Lebanon, Turkey.

Ten years ago when I was in Jerusalem, the Palestinian intifada was entering its second year and days after I arrived, a bus bombing in Tel Aviv had killed more than a dozen Israelis. Yasser Arafat was hiding, powerless in his ruined compound while Palestinians struggled under Israel's military lockdown. The holy city's tourists were gone. Its hotels sat empty. Only tension remained.

"You shouldn't go there," a policeman warned me, at the checkpoint separating the Jewish quarter of the old city from the Arab part. The Arab side was darker, more densely populated, and buried deeper into the walls of the ancient city. But it was bristling with market life: Kids squeezed freshly sliced pomegranates and men grilled coarse lamb kebabs. Eating my way through the Arab quarter that day, with its riotous flavours and sounds, the conflict dissipated into a haze of fluffy pitas, smoky vegetables and rosewater scented pastries. I had ventured to the other side, and it was delicious.

In their new cookbook Jerusalem, chefs and business partners Yotam Ottolenghi (an Israeli Jew) and Sami Tamimi (a Palestinian Arab), write this about the city they grew up on opposite ends of: "In this soup of a city [it] is completely impossible to find out who invented this delicacy and who brought that one with them. The food cultures are mashed and fused together in a way that is impossible to unravel. They interact all the time and influence one another constantly, so nothing is pure any more. In fact, nothing ever was."

Ottolenghi and Tamimi have won much praise for their gourmet shops and restaurants in London, as well as previous cookbooks, which elevate Mediterranean dishes and European baked goods into high art. Jerusalem is a beautiful book, filled with hearty recipes rooted in the city's kitchens, gathered from family members, local institutions and creative young chefs (both Arab and Jewish), updated with a modern touch that in no way distracts from the traditions.

There are riffs on favourites, modernized and deconstructed, like an open-faced kibbeh cake of ground lamb and buckwheat, classic Palestinian snacks, like fried garlic tomatoes, and even dishes with a mixed provenance, like the Sephardi soffrito stewed chicken, which is a Jewish dish adapted from North African Arab recipes. Visiting tables on both sides of a divided city, while fully acknowledging the cultural and political forces that shaped their evolution, it's a unique love letter to the authors' home town.

"What you get in Jerusalem is probably the largest number of examples of that type of food, which is a cross-hybrid of various Jewish cultures and Arab cultures," says Ottolenghi, speaking along with Tamimi from London. He notes that while other Israeli cities like Tel Aviv or Haifa have Arab populations, Jerusalem is the only one where Israel meets Palestine head on. "It makes the position of the cultures much stronger."

The city's Jewish food culture, pulled from communities around the world, is shaped by modernism, and the creative energy of young Israelis trying to define themselves. "Jewish cooks are very experimental, and they never sit in one place," says Tamimi, who cooked in many Jewish-owned restaurants when he still lived in Israel, back in the 1990s. In contrast, Palestinian food culture is local, seasonal and traditional, with recipes faithfully preserved over generations. What emerges is a wonderful balance of old Middle Eastern cuisine with a Western vibrancy to it, something found in few other countries in the region, except perhaps Turkey or the Emirates, and only a handful of other cookbooks to date.

Arabs and Jews have no trouble breaking bread in London, New York, or other cities outside the Middle East. In Toronto, at the aptly named Jerusalem restaurant, a largely Jewish clientele convenes nightly to enjoy the velvet hummus and saffron flavoured rice of its Palestinian owners. But in Jerusalem itself, Jews and Arabs, living just blocks apart, no longer come together to eat. The communal table is an unfortunate casualty of the conflict, and Ottolenghi and Tamimi both agree that their venture would have no chance in a divided Jerusalem.

In that way, Jerusalem the book is the best we can hope for. Its pages open into an idealized holy city, where tastes and cultures meet with only loving words, where conflict doesn't interfere with flavour, and a journey to a market on the other side of town brings neither judgment nor fear.

Yotam Ottolenghi and Sami Tamimi are appearing on Sunday, Oct. 21, at Toronto's George Ignatieff Theatre for an onstage interview and book signing, presented by the Cookbook Store, and at a dinner hosted by the Bonnie Stern Cooking School.

Stuffed eggplant with lamb and pine nuts from the Jerusalem cookbook
October 16, 2012 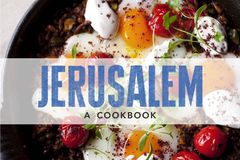 Superchef Daniel Boulud gets it right in Montreal
September 25, 2012 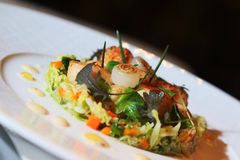 Why Jacob Richler’s Canada includes foie gras: ‘We’re at the top of the food chain’
October 9, 2012 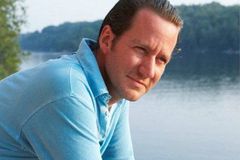