IF YOU'RE IN A RUSH

Back in Thailand, some home cooks will cut corners to put a meal on the table. You can, too. Here are Leela Punyaratabandhu’s acceptable shortcuts for the Canadian home cook:

Even though a mortar and pestle is central to Thai cooking, you can substitute a food processor.

You don’t have to make your own coconut milk from a whole coconut. The high-quality canned stuff is good enough.

Thai home cooks often buy their curry pastes at the market. There is no shame.

You can turn green curry into two meals by making fried rice with the leftovers.

Capturing the salty, sweet, spicy and creamy (all in one bite!) tastes of Thai cuisine from scratch can be daunting – it’s much easier to order takeout. “Easy is a relative term. I grew up in Thailand. A lot of things [North] Americans think are easy aren’t easy to me,” says Leela Punyaratabandhu, author of the new cookbook Simple Thai Food: Classic Recipes from the Thai Home Kitchen. “You guys have been making brownies since you were eight!”

In North America, our interest in Thai food is on the rise. According to a market analysis report by Agri-Food Canada, Asian fast food chains, including Thai offerings, are the quickest growing subsector of the fast-food market. As food cycles go, what started in the mom-and-pop restaurant has migrated to the mall where, let’s be frank, the gloopy, red-tinted pad Thai isn’t exactly delicious. So unless you have a sensational Thai place in your neighbourhood, or you can make a great green curry, Thai cuisine’s tastes, such as the salty umami of fish sauce combined with the silky smooth coconut milk, the tang of the tamarind and the pungency of the spice mix, are sadly out of reach.

Two new cookbooks this season promise to demystify Thai cooking. In addition to Punyaratabandhu’s offering, there is Thailand: The Cookbook, which features obscure regional recipes. 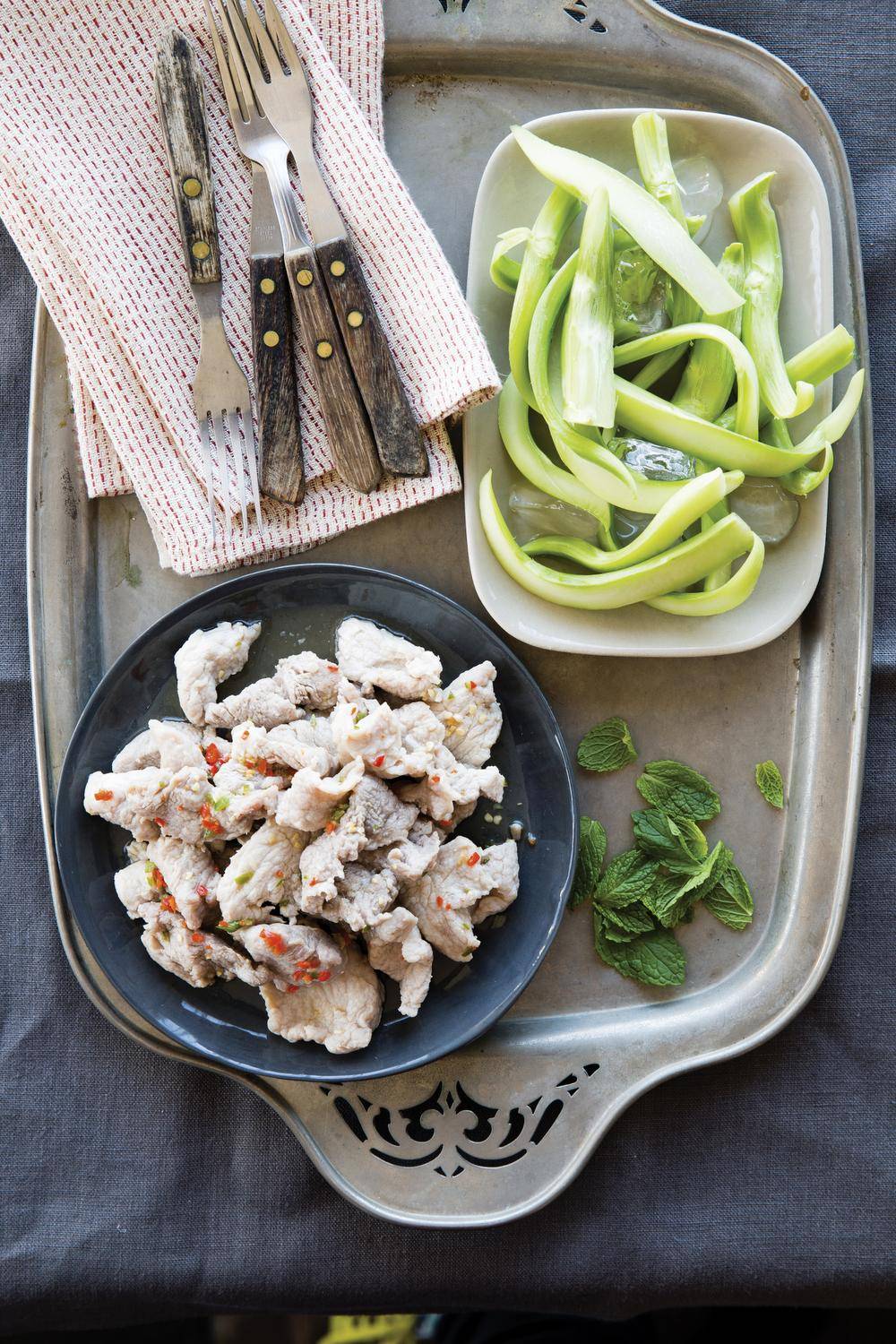 Warm, tender pork in a tart, spicy dressing served with a plate of ice-cold uncooked broccoli stems is a thing of beauty – the perfect interplay of spicy and clean flavours, soft and crunchy textures, warm and ice-cold temperatures.

The type of broccoli traditionally used in this dish is Chinese broccoli, sometimes labelled with its Chinese name gai lan or kai lan. I have found the stems of regular supermarket broccoli to be a perfect – actually better and less expensive – substitute. Although nontraditional, I have even found fresh asparagus to be a great substitute when I do not have broccoli stems around.

Cut the pork against the grain and on the diagonal (30- to 40-degree angle) into thin, bite-size pieces. Put the pork in a bowl, sprinkle the baking soda over the top, and mix well (this is best done with your hands). Cover and chill while you ready the other ingredients.

If using Chinese broccoli, test to see if the stems are tender enough to eat without peeling them. If they are, trim about 1 inch off the bottom of each stalk end and any leaf stems, leaving just the main stem, which will look like an asparagus spear but thicker. If they are not, trim them as directed and then lightly peel them with a vegetable peeler. If using stems of regular broccoli, peel off the fibrous skin with a vegetable peeler until the inner core is exposed. Cut the Chinese or regular broccoli stems into sticks 5 inches long and 3/4 inch thick. Arrange the stems on a plate, cover, and refrigerate.

In a bowl, stir together the lime juice, fish sauce, sugar, garlic, and chiles until the sugar dissolves. Place the bowl next to the stove.

Stir the pork gently until it is no longer pink, about 1 to 2 minutes. Using a wire-mesh skimmer or a slotted spoon, lift out the pork, shaking off the excess water, and add it to the dressing in the bowl. Toss the pork with the dressing and transfer the mixture to a serving platter.

While the pork is still warm, remove the plate of broccoli stems from the refrigerator and scatter the crushed ice over the stems. Serve the pork salad and the iced broccoli stems together, instructing diners to enjoy a bite of the pork alternately with a bite of ice-cold broccoli stem. Garnish with mint leaves. 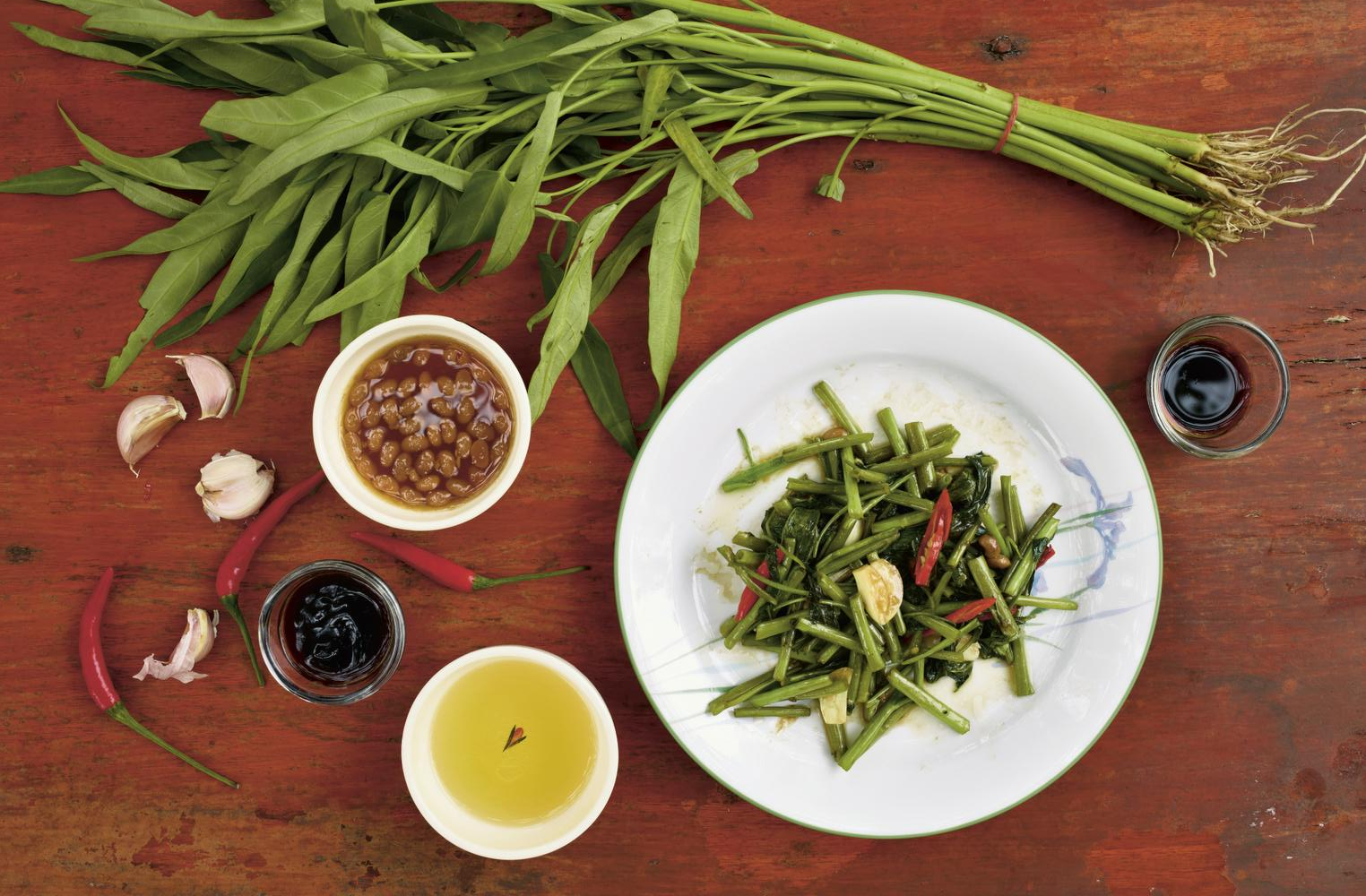 These are foods you won’t likely see on any North American menu, such as a salad made with giant water bug eggs or another calling for one cup of red ants. The press copy for this book says the thick tome is for those who want to discover the “real Thailand.” While the book also offers recipes for dishes more familiar to foreign taste buds, such as fried spring rolls and drunken noodles, a dish calling for giant water bug eggs is likely to leave the Canadian home cook.

Punyaratabandhu, however, actually does simplify the complexity of Thai cuisine. The author walks the home cook through all the stages of meal preparation, from making green curry paste from scratch, to chutneys and desserts. She even offers recipes for foods she says many people in Thailand don’t often attempt at home, such as pad Thai. (With 14 ingredients, it’s complicated; Punyaratabandhu writes that in Bangkok, it is typically left to street vendors.) If you follow her directions in the papaya salad recipe, for example, and smash the garlic, chilies, peanuts and fish sauce with a mortar and pestle, your kitchen will smell as fragrantly authentic as a Thai restaurant.

But mention the word authentic and Punyaratabandhu shudders. “I hate the word authentic, but it seems to be the only thing that conveys meaning,” she said. What she means when she uses the expression is that her recipes teach the techniques of classic Thai cooking so that whether you make pad Thai in Edmonton or Halifax, it can be identifiable by Thai people as pad Thai. 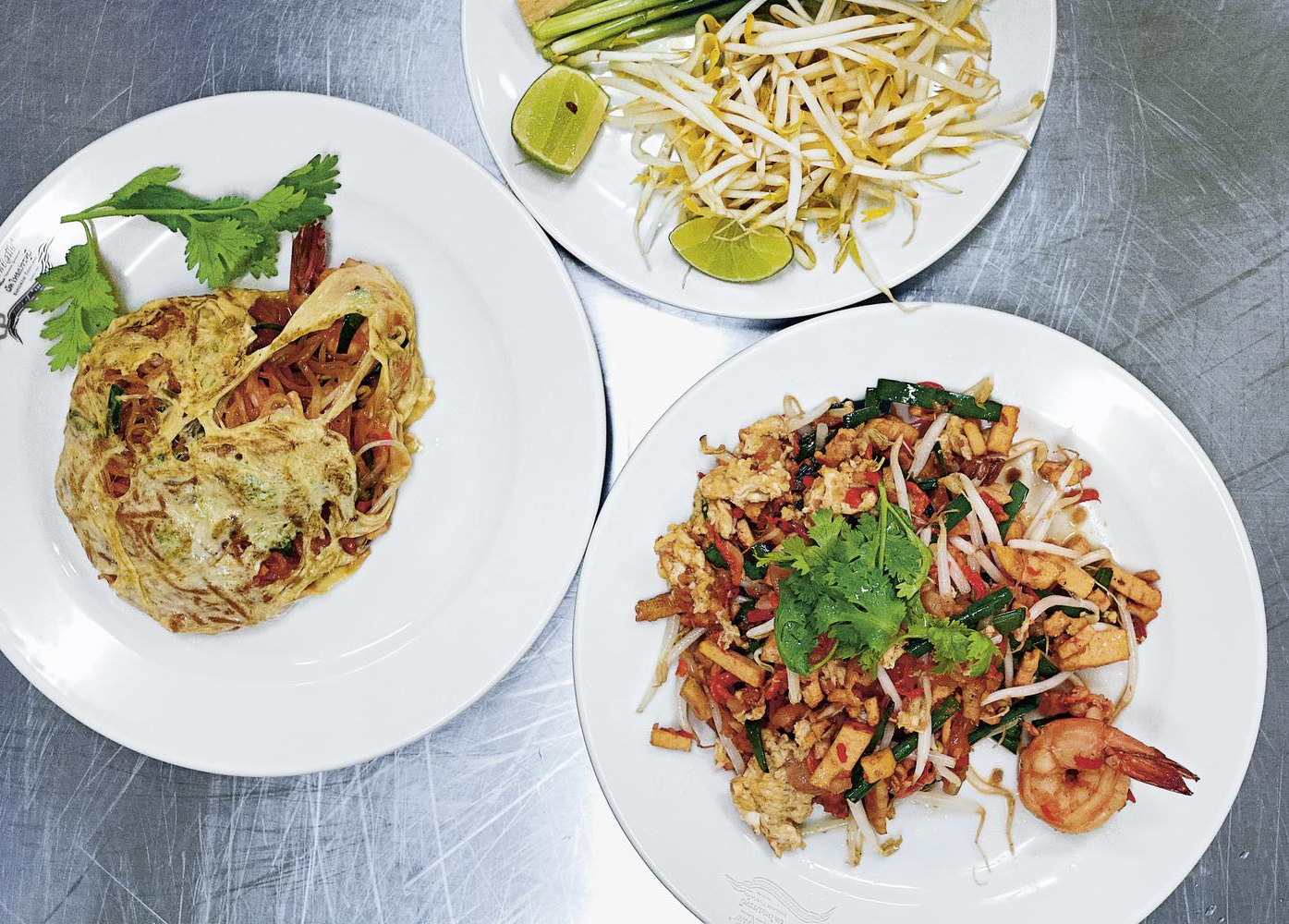 Punyaratabandhu learned to cook from her mother and grandmother in the multigenerational home where she grew up in Bangkok. Seven years after she moved to Chicago to study linguistics in 2001, she started a Thai food blog to satisfy her friends’ demands for recipes, and also to offer a memorial to her mother, who had recently passed away. To write this book, she travelled back to Bangkok where she visited friends and family and interviewed street vendors and other cooks so she could best capture the flavours of her home country in a way that a North American could get. “Not everything that looks intimidating is authentic and if something is simple, it doesn’t mean it’s less authentic,” she says.

But food culture in Thailand is changing just as quickly as food tastes in Canada, and what was authentic yesterday might not be as authentic today. When Nuit Regular, executive chef of Sabai Sabai and two other well-regarded Toronto-area Thai restaurants, returned in 2011 after five years in Canada to the Northern Thailand village where she grew up, the way people were eating bore little resemblance to what she remembered. “I was shocked. So much change! I couldn’t believe it,” she said. Rather than home cooking, she found that the younger generation in her village was heading to the market to pick up prepared versions of the foods they used to make at home. “You can buy breakfast, lunch and dinner there. That’s new,” she says.

What’s new on this side of the planet is that you can find the fresh ingredients required to cook in the way that is fading in Thailand. You can buy fresh galangal, lemon grass and kaffir limes to make your own curry paste. Not long ago, you couldn’t find these ingredients in Canada but they are now common in all sorts of grocers.

And because of changing food culture, the bar for what’s authentic can be lowered too, making Thai home cooking a little more accessible. Punyaratabandhu reassures by saying Thai home cooks now buy their curry paste at the market, rather than making it themselves, so there’s no guilt in opening a jar of good quality stuff. The real secret to success, she says, is to make sure you follow the instructions and stick to the ingredient list, using lemon grass, not lemon; cilantro, not basil; kaffir limes, not other varieties.

“What is Thai cuisine other than dishes made from whatever is grown in the territory of Thailand?” says Punyaratabandhu – a topic of discussion to be had over Thai food, authentic or not. 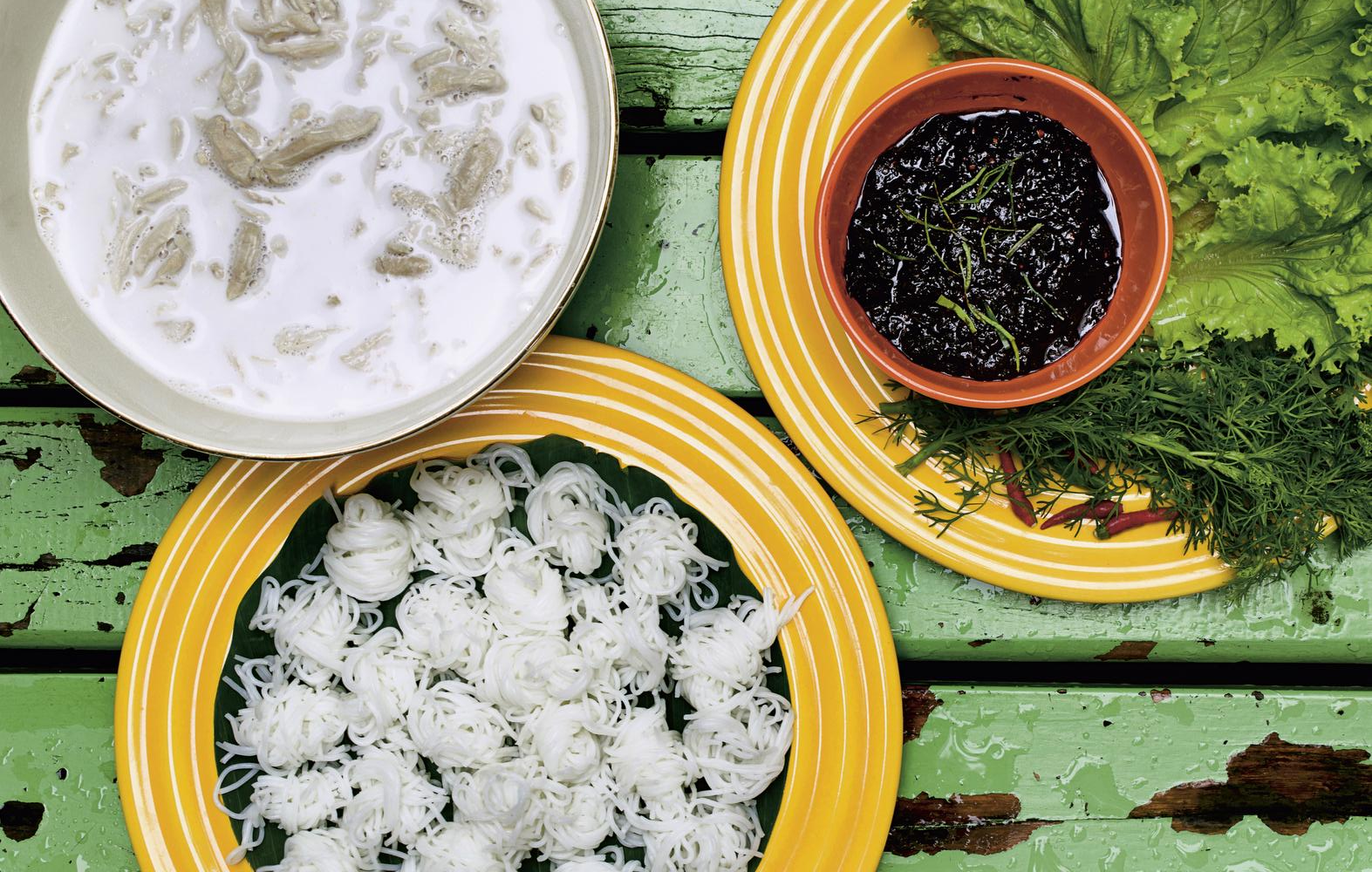