Celebrated chef Vikram Vij, the latest investor to be cast on CBC's Dragons' Den, knows what it's like to stand before a group of successful business people and ask for money; he did it himself 20 years ago, when he was looking to start his own restaurant in Vancouver.

He presented a business plan to four wealthy Indo-Canadian investors and asked for $20,000. "And they all turned me down," he says. "[They] said 'Sorry I don't think this is the right concept. I do not think a modern Indian restaurant would actually work.'"

Crushed, Vij called his father in India, who told him to keep working, and promised to come for a visit. He arrived with a little brown bag stuffed with bundles of cash – $23,000 (U.S.), acquired by selling his last property in India." With $10,000 Vij himself had saved, he was able to open his restaurant, Vij's, in 1994. It was tiny – just 14 seats. And the kitchen was so ill-equipped, Vij's mother would make chicken curry at home and carry it on the bus all the way to the restaurant from suburban Richmond. "For the longest time she didn't tell me that everybody on the bus would look at her [as if to say], this crazy woman has a pot of chicken curry between her legs," says Vij.

The restaurant, now in a much larger location and about to move again, got great reviews, and the customers came – including the businessmen who chose not to invest. "The guys used to come here and have dinner," says Vij. "And they would look at me and I would say to them: 'I told you so.'"

Vij and his wife, Meeru Dhalwala, have spun the concept into an empire, with sister restaurants, a gourmet line of boil-in-bag foods sold in grocery stores across the country and partnerships such as Vij's Delhi-licious kettle-cooked chips, and Vij's Railway Express food truck (not to mention bestselling cookbooks and judging stints on Recipes to Riches, Top Chef Canada and Chopped Canada).

When he settles into his Dragons' Den chair on Wednesday, he will be the guy with the bucks, sitting in judgment before other entrepreneurs in need of an investor.

It's new territory for Vij. While he may feel at home judging other cooks, investing in ventures that have nothing to do with food is a whole other matter. But even if he's out of his element, the show's executive producer says Vij is a good fit.

"You don't have to be a Bay Street trader … to be a good Dragon; you have to be a self-made entrepreneur who's built a business," says Tracie Tighe, who auditioned Vij during one of the show's regular casting calls. "We looked at him as someone who's knee-deep in building a bigger business right at this very moment."

There are sacrifices, though, as Vij spreads himself thin: less time for his family, including his two daughters, aged 15 and 17; less time on the floor of Vij's, where he has always been a huge presence, greeting customers and far less time for cooking. But he (or Dhalwala) still makes lunch for their younger daughter every day (their older daughter is now at McGill). On the day we met, it was pasta with a made-from-scratch tomato cream sauce. After the lunch hour, Vij texted her to see what she thought. "She said it's yummy, Papa."

One of two new Dragons (along with Bay Street Porsche-driving finance wiz Michael Wekerle), Vij is billed on the show as a "culinary kingpin," but he says he will be a compassionate Dragon who remembers what it felt like to be rejected by financiers who didn't get his concept.

"I said I will not do that. I will not be those people who turned me down because they didn't understand my business mentality," he said during an interview at Vij's. "I am going to give that person that love and that attention and see how much fire that person has in their eyes, how much passion they have and if that is [the case], then I'm going to let them be the ruler of their own fate. I'm just going to give them that helpful hand. … If they're swimming or sinking, I'm going to be that twig that they can hold onto for a little bit longer so that they can make things happen in their life." Even if Vij positioning himself as the "Dragon with heart" is a bit of show business in itself, it is completely consistent with his personality – and jibes with his own story.

"I'm the immigrant [Vij was born in India; he left at 19], so if there's an immigrant story I have tears in my eyes," he says. "If there's a story about a young entrepreneur that has put heart and soul into this project, I have a tear in my eye. I have a very soft spot. I'm the Jell-O of entrepreneurship. But on the other hand I'm very firm because it is my hard-earned money."

Fairness is another principle that Vij is not willing to sacrifice – one that plays out every day at his restaurant, which has a strict no-reservation, and no-exceptions policy. When Bill Clinton was coming to town, his people called ahead to see if arrangements could be made for the former U.S. president to dine there. But Vij would not bend the rules.

Then there was the night in the late 1990s, when former prime minister Pierre Trudeau came by for dinner.

"He walked in and the whole restaurant went pin-drop silent. [The other customers] wanted to see if I would sacrifice my principles of saying everybody's equal [and] give him a table ahead of anybody else."

He did not. Trudeau, with his son, Justin, waited, like everyone else.

Vij points to the area of the restaurant where Trudeau dined, and recounts what happened as the former prime minister was getting up to leave after his meal. "I bowed down in front of him and touched his feet [a gesture to communicate respect] and I said 'Mr. Trudeau I just want to thank you very much; it was your policies in the sixties that allowed immigrants like us to come and be successful. Had that not happened, chances are I would never have made it here.' He kind of lifted me up and gave me a hug and said 'You know I've had Indian food in lots of places but this is one of the best [meals] I've had.' And you cannot imagine [how I felt], as an immigrant. I was floored. I went home and I poured myself a Scotch and I gulped it down. This is what Pierre Trudeau had said to me. He was the reason why I was in this country. He was the reason I can be who I am."

This is a big year for Vij. Beyond his Dragon launch, he turns 50 in December – a big personal as well as business milestone.

"I had said to myself by the time I'm 50 I'd like to have five projects under my belt; one for each decade of my life," he says, specifying that each is to be a venture in which he has invested his own money. With Vij's set to move to a new location and a new concept planned for the current location – plus Rangoli, My Shanti and Vij's At Home – this Dragon is about to have five dens. "I did it," he says.

But with so many projects on the go, will too many ventures spoil the daal? Is there a risk of overexposure that comes with the ambition?

Vij says he isn't at all concerned about that. Just the opposite – he's excited about getting more exposure for his line of frozen foods.

And he's not done expanding yet. A big dream is to bring his modern Indian food to India. "I want to say … okay here it is; here is my interpretation. I was 19 when I left, having traditional mainstream Indian food, and look: [with] the journey, now the food has changed. I want to say: Here's one of your sons that left India and look what has happened to him."

Rock star chef minus the ego brings success in the kitchen
October 14, 2014 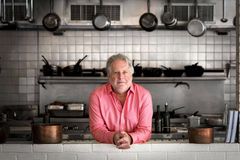 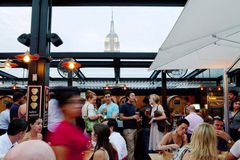 Celebrity chef Ricardo Larrivée next ambition: ‘I want to be the Google of Canadian food’
October 10, 2014 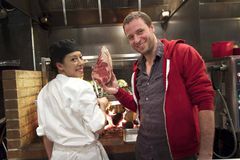 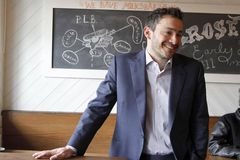