As he fills a trio of glasses, Alex Castellani notes the aromas of blackcurrant, citrus and tamarind rising from the burgundy liquid.

But this is no wine tasting. The Boxcar Social co-owner is preparing a flight of lightly roasted coffees – an Ethiopian Borboya, Honduran Vallecillo and Kenyan Karinga – which is still several minutes away from being sampled at the seven-month-old café in Toronto's Summerhill neighbourhood.

The "pour-over" brewing method can't be rushed, Castellani explains, as he dribbles 96-degree water into steel drippers atop three glass carafes. The carafes, in turn, sit on digital scales that also track the time that has elapsed since the process began. This data, along with measurements of total dissolved solids – that is, the strength of the brew – are displayed on a bar-top iPad.

This elaborate, technical and time-consuming coffee experience is very different from the grab-and-go approach familiar to most Canadians. Yet it's being echoed in one form or another across the country.

From downtown Victoria's Hey Happy to Anchored Coffee in Dartmouth, N.S., dozens of boutique roasters and cafés are encouraging customers to drink curated coffees in much the same way as a wine connoisseur sips a fine vintage. Like Boxcar Social, most recommend that their offerings be taken black, with modern garnishes such as syrups, sprinkles and foams eschewed in favour of pure, unadulterated beans."We're not here to make people drink coffee a certain way, but ours are curated to be black," Castellani says, adding that staff "won't scoff if a customer orders a vanilla latte. We want to make sure our coffee program is spectacular, unique, challenging and cerebral, but at the same time, accessible."

Phil Robertson, co-founder of Phil & Sebastian Coffee Roasters in Calgary, compares coffee garnishes to ketchup. "When we add ketchup to food, it changes and conceals the flavour. Remove the ketchup – or in coffee's case, the cream and sugar – and you can taste the nuances."

The company roasts its beans lightly for the same reason. "People assume that dark roasts mean higher quality," Robertson says, adding that "corporate vendors" such as Starbucks, Tim Hortons and McDonald's base many of their offerings on this perception. "But in reality, this actually strips away a lot of the flavours."

The public backlash to blended espresso beverages – Robertson calls them "uncoffees" – is among the reasons for Phil & Sebastian's success, he says. Since opening its first café at the Calgary Farmers' Market in 2007, the company has added four locations across the city, along with its Inglewood office and roasting facility.

Large coffee chains and vendors "obviously see a threat from the growing specialty movement and independent microroasters and cafés," Robertson says, pointing to Starbucks Coffee Co.'s plans to open a Seattle-based Reserve Roastery and Tasting Room – described as "an integrated coffee roasting, education and retail space" – in late 2014. The 15,000-square-foot facility will double the current output of Starbucks Reserve coffee, the company says, providing stock for 1,500 stores worldwide by the middle of 2015.

"We've noticed a consumer trend around simplification," says Dana Somerville, director of premium coffee for Kraft Canada, which owns Nabob. "Frankly, we believe that coffee culture has gotten a little bit out of hand. There are a lot of people out there who feel that coffee should be savoured in its purest form, without all these additives and syrups."

But curated flights of black coffee? "Your average consumer isn't interested in that," Somerville says. "Nabob is in no way pretentious, and we're not interested in getting our customers to think that way."

As soon as Boxcar Social's three coffees have been transferred from the carafes to rock glasses, the $7.95 flight is ready to sip. Like a sommelier, Castellani fills in the blanks when rookie tasters run out of adjectives. The Borboya? "Infused with candied lemon." The Karinga? "Demonstrates big body and round mouth-feel."

Then, when one of the rookies jokingly searches for some half and half, Castellani responds with a joke of his own: "I could let you, but then I'd have to fire myself."

Boxcar Social's Alex Castellani offers these tips for tasting a flight of coffee:

1. "Bring your nose very close to each sample and take in the aroma with a deep inhale. You can refresh your senses by smelling your shirt sleeve between samples."

2. "Brewed coffee's colour and consistency are not as variable as that of red wine, though people assume that coffee is black or dark brown. In fact, lightly roasted coffee in a glass looks dark red."

3. "One of the most interesting parts of coffee tasting is how taste changes across temperatures. We line up coffees from lowest strength of flavour to highest, and encourage customers to taste each many times as it cools."

4. "To enhance the flavour, try drinking the coffee in loud, quick slurps, which sprays it across your palate."

Phil & Sebastian's Phil Robertson recommends the following cafés and roasters, among others:

Breaking down the nutritional claims of a butter coffee
October 28, 2014 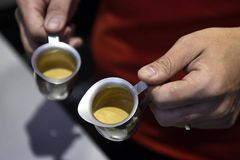 Artificial or natural? How safe are your food flavourings?
October 14, 2014 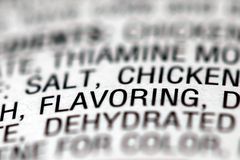 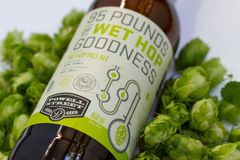